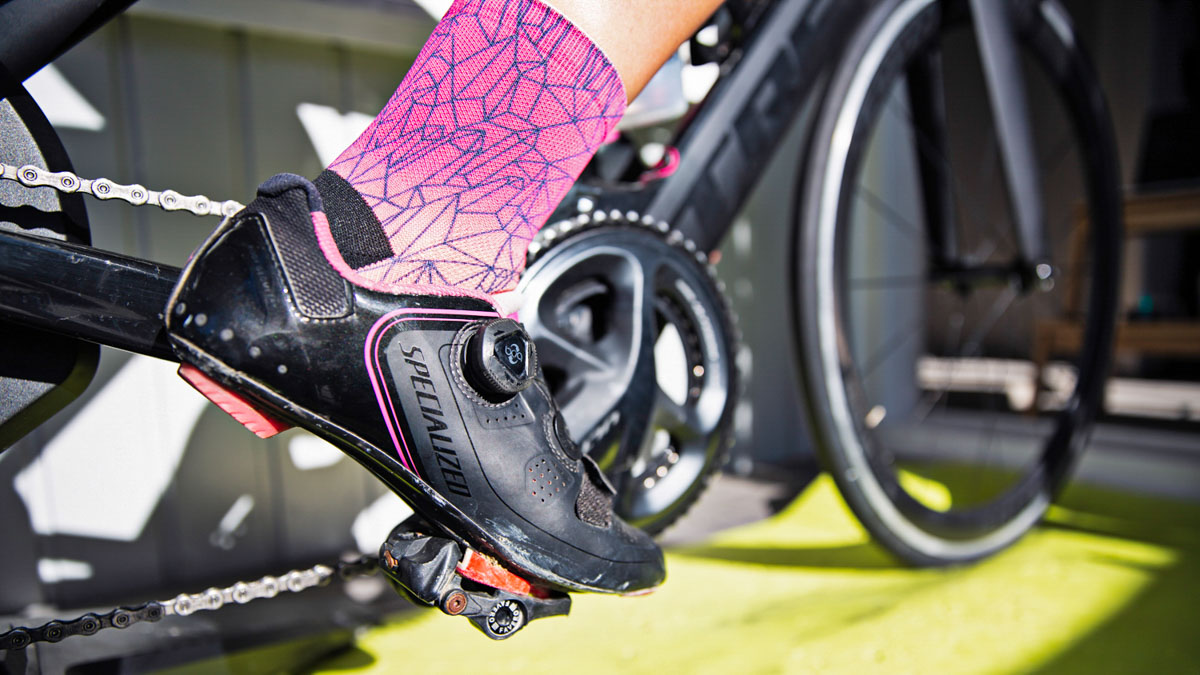 Riding Inside: Benefits to Your Health, Fitness and Competitive Edge

New tech has made indoor riding more engaging than ever—here’s why it’s also really good your overall health and performance.

Excerpted from Ride Inside: The Essential Guide to Get the Most Out of Indoor Cycling, Smart Trainers, Classes, and Apps by Joe Friel and Jim Rutberg, with permission of VeloPress.

When you really stop and think about it, there are a lot of advantages to riding inside, but most of them fall into the category of “avoiding a negative.” Indoors, you won’t get hit by a car, get lost, get home late, get caught in a thunderstorm, run out of daylight, run out of water, or mess up an interval workout because you reached the top of the hill too soon. But riding inside isn’t about what won’t happen; it’s about what can happen.

There is perhaps no greater proof that riding inside can prepare you for winning performances outdoors than Mathew Hayman’s victory at the 2016 Paris–Roubaix. For those less familiar with European cycling, Paris–Roubaix is one of professional cycling’s five Monuments, prestigious one-day races that are very long (150–165 miles) and exquisitely brutal. Paris–Roubaix’s vicious reputation stems from more than two dozen stretches of rough Napoleonic-era cobblestone roads, which gradually rattle, bounce, and batter riders into submission, with crash wounds to prove it.

To even be in contention to win Paris–Roubaix, a rider first needs to be strong enough and lucky enough to last through the battle of attrition and reach the final 40 miles with the front group. Your ability to succeed from there forward, however, depends a lot on how much the preceding hours took out of you. When you’re more fit, you don’t have to dig as deep into your reserves as often or as much as the other riders, so you have something left to give when it matters most.

Australian Mathew Hayman was a journeyman professional cyclist. He was strong and smart, and he was one of the best teammates a leader could have. He didn’t win many races and wasn’t the most famous rider, but his work as a teammate put a lot of champions atop podiums around the world. Going into 2016, he had ridden Paris–Roubaix 15 times and finished them all. It was his favorite race, and because it’s such a battle of attrition, it is one of the races where journeyman team players can ride themselves into the leadership role if they’re the rider who makes it into the front group.

In a race called Omloop Het Nieuwsblad in late February, Hayman broke his arm in a crash. He had been training for months with the plan to be in top shape for Paris–Roubaix on April 11, but with a broken arm, he couldn’t train outdoors and certainly couldn’t compete in other spring races that are both goal events and major training stimuli. In his 17th year as a professional cyclist, it looked like his spring classics season was finished before it started.

Determined not to lose the fitness he had worked so hard to gain, Hayman rode more than 1,000 kilometers (624 miles) on an indoor trainer in his garage while his broken arm healed. Just like he would have outdoors, he rode a lot of hours at a moderate pace and completed focused interval workouts prescribed by his coach to keep and develop the power required to ride Paris–Roubaix.

On the day of the race, Hayman wasn’t designated as the leader, the rider the team was going to work for and hopefully put in a position to win. That was normal, as was his role as “road captain,” the rider charged with adjusting the team’s tactics on the fly. As the race unfolded, his experience and tactical prowess helped him make all the right decisions about when to go hard, when to chase, and whom to follow, and he made it into the final 20 miles as the last team rider in the lead group.

After nearly six hours of racing, Hayman and Tom Boonen, already a four-time winner of Paris–Roubaix, rode onto the velodrome in Roubaix with a lap and a half to go and a chase group of three close behind. In the final 500 meters, the group of five were all together, and Hayman was at the front, with his face in the wind rather than in the slipstream behind. Starting the sprint from the front with Tom Boonen, Edvald Boasson Hagen, Sep Vanmarcke, and Ian Stannard in your draft would normally be the worst possible choice, but this time it worked, and Hayman had enough left in the tank to capture the biggest win of his career.

Though Hayman’s path to Paris–Roubaix victory was an anomaly, there is an argument to be made that the advantages of indoor cycling I mentioned earlier actually enhanced his preparation. Compared to other riders who were traveling and training and getting battered in other brutal races, Hayman was at home training when and how he wanted to, eating the food he chose, sleeping in his own bed, and spending time with his family. Precise training, great recovery, and a low-stress environment. Beat that.

If you are an experienced cycling or triathlon competitor, you are already experiencing the health benefits associated with improved cardiorespiratory fitness. For those who are newer to endurance training, and as a review for everyone, it is important to understand the relationship between exercise and health.

I have spent my career helping endurance athletes improve performance, which is not necessarily synonymous with improving health. At the elite end of the spectrum, athletes are pushing themselves to the point where their immune systems can be compromised and where they risk various musculoskeletal injuries. Certainly, one of my goals as a coach is to help them optimize performance without those negative outcomes, but in principle it’s important to recognize that athletes focused primarily on competitive performance may willingly accept some increased health risks.

For some athletes, though, too much of a good thing may be harmful. As a large generation reaches the 50+ age group, more people are experiencing cardiac arrhythmia, particularly various types of tachycardia characterized by rapid heart rates. Decades of high-intensity exercise may be a contributing factor for developing tachycardia, particularly atrial fibrillation, in some athletes.

Exercise causes inflammation and also raises your body’s anti-inflammatory response. Acute (temporary) inflammation caused by exercise is a necessary part of the process that leads to greater fitness. It is also the immune system’s healthy response to allergens and infections. With a healthy immune system, your body’s anti-inflammatory mechanisms restore homeostasis once the threat has passed. On the other hand, chronic inflammation is thought to play a role in the development of cardiovascular disease, type 2 diabetes, arthritis, and even dementia. But people who exercise regularly and have greater aerobic fitness are less likely to experience chronic inflammation.

During the COVID-19 public health crisis, the interaction between training and immunity became a hot topic for coaches and athletes. It is well established that exercise supports a healthy and functional immune system better than being sedentary, but athletes wondered whether high-volume or high-intensity exercise potentially suppressed immune function and increased susceptibility to infection. The short answer is that individual bouts of exercise are unlikely to increase infection risk, but dramatic and sustained increases in training workload can be a contributing factor, along with disturbed or insufficient sleep, insufficient energy intake, elevated lifestyle stress, and more.

According to the most recent National Diabetes Statistics Report from the Centers for Disease Control and Prevention (CDC), more than 34.2 million Americans (10.5 percent of the population) had diabetes in 2018. Of them, about 90–95 percent had type 2 diabetes, where the pancreas produces insufficient insulin to adequately control blood sugar levels. The causes of type 2 diabetes are largely associated with lifestyle, in contrast to type 1 diabetes, which is an autoimmune reaction that destroys some or all of the insulin-producing cells in the pancreas. Exercise reduces the risk of developing type 2 diabetes by increasing insulin sensitivity and increasing your capacity to store ingested carbohydrates as muscle glycogen.

You can view this benefit as “exercise makes you smarter” or “exercise prevents cognitive decline.” Both are likely true. Exercise improves circulation and oxygen delivery to the brain, which promotes neurogenesis. It also improves neuroplasticity, or the ability to learn and retain new skills. Two types of exercise are important for cognitive function: Aerobic exercise improves global cognition and executive functioning via cardiovascular benefits. Exercises that challenge your motor skills (complex tasks, balance, coordination) and require keeping track of information (interval training) are also important because they directly improve task-specific neuroplasticity. In another case of “use it or lose it,” exercise has also been shown to protect against cognitive decline associated with aging.

In endurance sports that involve hills and mountains, body weight plays a significant role in performance. Being lighter means you don’t have as much mass to move against gravity. That doesn’t mean being as lean as possible is automatically the best option for endurance athletes. When athletes become too lean, physical capacity to perform work can start to decrease, and athletes become more susceptible to illness and injury. If you are looking to lose weight, the goal is to reach a sustainable bodyweight that doesn’t compromise your power output or immune system.

There are far more amateur athletes who have weight they can lose than there are athletes who are at risk of becoming dangerously lean. Indoor cycling can contribute to the energy expenditure side of the “calories in versus calories out” equation, particularly because you can expend upward of 1,000 calories during 60 minutes of high-intensity indoor cycling, whereas you’re more likely to expend 500–600 calories at a less intense, endurance pace outdoors.

Truth be told, however, nutrition plays a more significant role than exercise when it comes to weight loss. It takes an hour of strenuous exercise to expend 1,000 calories, but you can consume a 2,000-calorie meal in 10 minutes. The old adage “you can’t outrun a bad diet” is true. Where indoor cycling creates an advantage is the increased opportunity to exercise consistently.

Just as Mathew Hayman used indoor cycling to maintain and improve his fitness for bike racing, athletes in other endurance sports can use indoor cycling to supplement their sport-specific training. This strategy can offer a way to increase an athlete’s aerobic workload with less muscle damage (as cycling is low-impact and not weight-bearing). Similarly, it can be used to maintain aerobic fitness while a non-cyclist is recovering from a sport-specific injury, depending on the injury. Sport-specific training is essential for meeting the demands of your competition, but generalized aerobic training stress improves cardiorespiratory fitness that can be applied to any endurance activity.

You Adapt to Heat

Heat acclimatization is essential for athletes training to compete in a hot or humid environment. When you live in Boulder, Colorado, through the winter and need to be ready for an early-season goal race in Arizona or Southern California, it is a good idea to take proactive steps to adapt to exercising in the heat before you go. Triathletes often use heat acclimation strategies to prepare for the intense heat during the Ironman® World Championship in Kona, Hawaii, and ultrarunners use it to get ready for events like Western States and the Badwater 135, which goes through Death Valley in July.

There are specific heat acclimation protocols, typically incorporating both passive exposure to heat and training in a heated environment. Indoor cycling is one of the more convenient ways for athletes to exercise in a climate-controlled room. The outcomes athletes are looking for include lower resting core temperature, increased plasma volume, more rapid onset of sweating, increased sweat rate, decreased electrolyte concentration in sweat, and reduced sensations of thermal strain.

About Joe Friel
Joe Friel is the author of The Triathlete's Training Bible, Your Best Triathlon and other books on training. For more information visit his website at www.joefrielsblog.com. You can also view and purchase Joe's training plans on TrainingPeaks.
Visit Joe Friel's Coach Profile
#CYCLING#PERFORMANCE