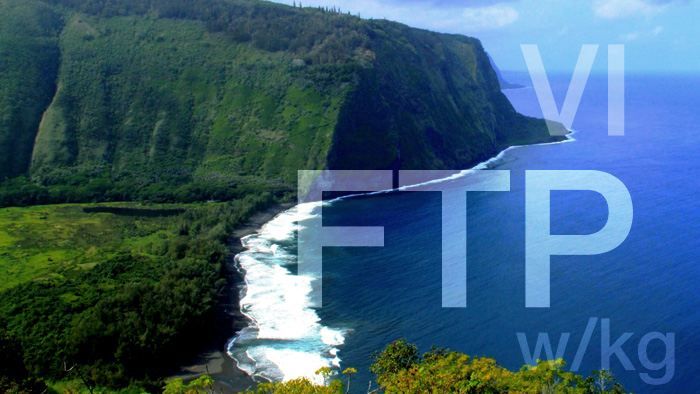 Lessons from Kona: How to Nail an Ironman Bike

We take a look back at professional and age group power files from the 2012 and 2013 IRONMAN World Championships to highlight the elements that make up a successful IRONMAN® bike. You can use these same principles to have a successful ride at your next race.

The IRONMAN® World Championships showcase the top professional and age group triathletes in the world. By using the data from these athlete’s power meters, we can see what it takes to be at the top of the pro and age group ranks. Fortunately, the same principles used by these top athletes can be implemented by any athlete to ride smart and run hard.

First, we need to know the rider’s Functional Threshold Power, or FTP. This number is the wattage an athlete can sustain for one hour. This number is critical as it is essentially the baseline for many other metrics. If this number is off by too much, the rest of the data will be skewed.

Pacing is a key element to success in any triathlon, especially during an IRONMAN® and even more so in Kona. Using a power meter, athletes can gauge their effort more precisely and ensure they have the best bike split possible, while still being able to have a strong run. Using Intensity Factor® (IF®), an athlete can set the right wattage range to ride in. For the pro men and women, we typically see an IF of .78 to .82. This means that they ride at 78 to 82 percent of their FTP. To put it another way, for four and a half to five hours, the pro athletes hold 78 to 82 percent of the effort they can hold for one hour. In 2013, Luke McKenzie had an IF of .82 on his way to second place overall. Meredith Kessler’s 2013 power file shows an IF of .80.

Age group athletes should aim for an IF of .65 to .75 in order to set themselves up for a strong run. Using this number you can do some simple math to obtain a goal wattage for the bike. For instance, if your FTP is 250 watts, simply multiply that by .70 and you have 175, or your goal wattage for a moderate to aggressive bike ride. If it is your first IRONMAN or you are not a strong runner, lower your IF to .65. Having this number can help you pace your entire ride, especially in the first miles when it’s easy to get caught up in the excitement of race day.

How those watts are put out is also a key factor. An IRONMAN® is all about being steady and keeping the effort relatively moderate. Big spikes in power cause a much faster burn rate of glycogen, creating fatigue faster. It is better to keep your power as steady as possible. Using the Variability Index (VI), we can see how smooth or erratic the power output was. For every rider, pro male, or age group female, a VI of 1.05 or lower is the goal. While it’s harder to do on a hilly course, it is still necessary to keep the effort steady. The bike course in Kona has around 3,000 ft. of elevation gain, so it’s not flat by any means. Still, every file from the pro athletes does have a VI of 1.05 or lower. One of the lowest VI’s we’ve seen came from the 2013 age group overall champion and course record holder, Kyle Buckingham. Buckingham’s file from 2013 shows a VI of only 1.02, while Faris Al Sultan had a VI of 1.04.

Many athletes wonder how many watts the top athletes hold during the bike. However, since the athlete’s weights vary, total watts alone is not the best measure. For instance, if two athletes are pushing 300 watts but one weighs 70kg. and the other weighs 75kg., their speeds will differ. Instead of absolute watt output, we use watts per kilogram (w/kg) to measure wattage in an apples to apples manner. This is really where the top athletes separate themselves from the rest. To achieve the best w/kg. takes years and years of dedicated practice, and of course good genetics doesn’t hurt. For a top pro male athlete, and top age group male, we see a w/kg. average over the full 112 miles of 3.8 to 4.0. From his 2012 win in Kona, Pete Jacobs’ power file shows that he held an average of 4.01 w/kg., the highest we’ve seen from a full IRONMAN®. This number dips slightly to 3.1 to 3.6 w/kg for the pro women. Linsey Corbin’s 2013 file shows 3.56 w/kg.

Learn from the top professionals in the sport, and use these principles to help you dial in your next 112 mile ride. No matter if you are a veteran or first timer, racing to win or just to finish, these principles are your guide to success.

About AJ Johnson
AJ Johnson has been a USA Triathlon certified coach for more than 15 years and is also certified by USA Cycling. He has worked with hundreds of triathletes and cyclists, from beginners to professionals, to help them achieve their goals. His coaching and training plans are designed to provide a balance between training and the needs of every day life so athletes can achieve their best and enjoy their journey. Find out more about his coaching options and training plans.
#IRONMAN#TRIATHLON