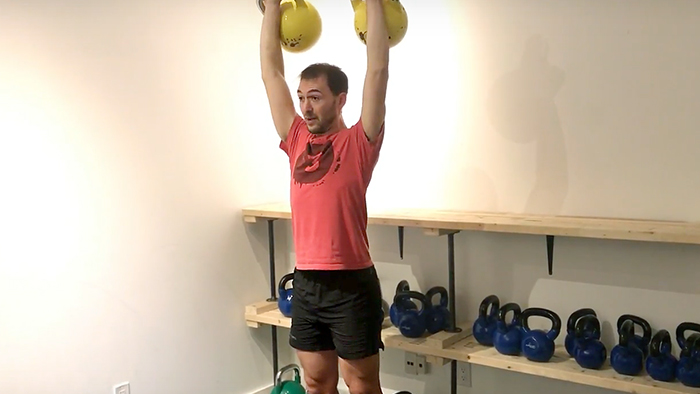 It’s April, and the weather outside is a little less frightful. Snow is melting, daylight hours growing and training periodization is shifting from base work to builds.

With any luck—or with solid season planning—you have been following a structured resistance training program for some time and have achieved a base level of strength fitness. With a shift in focus from general strength acquisition to sport-specific work it makes a lot of sense to make room in your resistance routine for kettlebell practice.

The deep history of kettlebell sport is a little murky. We do know that by the mid-twentieth century, the sport saw wide practice in the former Soviet military. The popularity of kettlebell training, at least in North America, is far more recent.

Now it is common to see this training tool in commercial gyms worldwide. There’s good reason for it too. Kettlebell training is a versatile modality that can be readily adopted into the supplementary strength work performed by endurance athletes.

So with swim-bike-run specific demands in mind, let’s look at four kettlebell movements and their application to triathlon. Watch the video at the bottom of this article to see all of these exercises, or click here.

The swing is a sort-of kettlebell gateway drug. It’s not exceedingly difficult to perform, but not as easy as many assume it to be. Hint: it’s not a squat! The swing is fantastic for triathletes for a couple of reasons:

An evolution of the swing, and one of the two staples of competitive kettlebell sport. The snatch is one of the most dynamic movements out there. Just about every major posterior muscle in the human body has a role to play in powering a kettlebell from between one’s knees to a full lockout overhead. Here are my two favorite elements:

The circle with stall

This supplementary movement is one of the best functional core exercises I know. It is easier to execute than the snatch, and can be used as active recovery between heavier or more intense sets too. The value of the circle with stall is how it utilizes the muscles involved with trunk rotation. Again, it checks two of my boxes.

These are a bit of a cheat, as they do not require kettlebells and can be performed with any weight apparatus. Still, these two simple movements are easy to execute and sufficiently useful to include. The big benefit here is postural strength development. The value of which is apparent to anyone looking at runners at the end of an IRONMAN marathon. Strong runners still upright have terrific, fatigue-resistant postural muscles. Want some yourself? Add a farmer carry or an overhead carry after a long run!

This is a good spot for an important disclaimer: While kettlebell practice is perfectly safe when performed correctly, the technical nature of some of these movements and the very fact that the weight often ends up overhead, behooves any would-be practitioner to seek coaching on correct mechanics.

While we are providing a link to a video demonstrating all of these lifts, watching a video is no substitute for qualified, in-person instruction.

Watch this video to see all of the above exercises, as well as tips on proper form and kettlebell swing mechanics:

About Michael Liberzon
Michael is a mechanical engineer turned triathlon coach and kettlebell instructor based in Toronto, Canada. Michael has been involved in endurance sport for 12 years, and has worked with dozens of clients: from first-time triathletes to serial marathoners looking for their first BQ, to obstacle course racers, and ultra-distance competitors. In 2015, Michael opened the X3 Training Lab. This facility is all about the pursuit of endurance sport excellence. At the Lab, they combine power-based indoor cycling workouts with the resilience and power development of strength and mobility programs to build a faster, stronger and more resilient athlete.
#STRENGTH