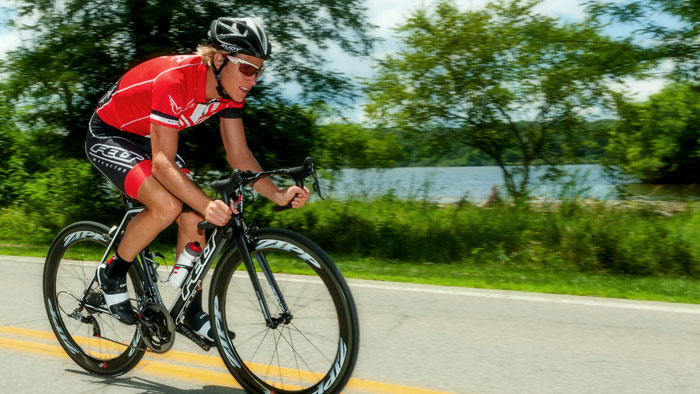 One of triathlon’s top cyclists, Josh Amberger will be giving it his all at the 70.3 World Championships next weekend. We checked in with him and his coach Cliff English to see how he has prepared for the big day.

On September 7th, 55 pro male athletes will line up at Mt. Tremblant, Quebec to race for the 70.3 World Championship. One of those athletes is Australian Josh Amberger. Known for his strong swim/bike combination, Amberger started working with coach Cliff English to find new ways to get even faster. Here’s a look into Amberger’s training leading up to Mt. Tremblant.

English believes in race specific efforts, which of course are more critical the closer you get to race day. “I’m a huge fan of the longer tempo format for the ride, whether they are 20, 30, or 40 minute intervals definitely incorporating the terrain you are preparing for,” says English.

Amberger agrees saying, “I think the session that prepares me best is the long tempo format that Cliff’s saying. A 4 to 4.5 hour ride with at least 2 hours worth of race pace effort and your recovery, warm up and cooldown built in, that makes it the longer ride.” During a 4 week stay back home in Brisbane, Australia, Amberger used a rolling course and rode out and back multiple times to do these key rides. His ride from August 9th illustrates this type of workout perfectly.

During this bike workout, Amberger used a series of intervals that netted 2:20 pushing race effort watts. “I’ve done a lot of workouts in the past when I was self coached and I’d hit great power, but it was only for 30 minutes to an hour. But doing 2 hours of race pace and nailing every interval without there being much VI (Variability Index, a measure of how evenly the power output was) throughout the session, that is big,” he says.

It’s worthing noting that when you look at the file, some of the intervals had downhill sections that forced him to stay on the power, a point when many athletes look to recover. “If you’re not training to be in that discomfort zone of having to keep wattage up on downhills, powering over the crests and raising the power up the climbs then you’re not going to perform well,” says Amberger. English agrees saying, “Looking at Mt. Tremblant, it’s a course that you want to be good at maintaining your speed and power on the downhills as well. You want to make sure you do that in training.”

Specificity matters more than variety. To that point, the following week Amberger used the same route and rode a similar workout incorporating 1:40 of race effort intervals.

Getting to the point where he is even capable of a session like this takes time. “Where Josh is talking about right now, we’re a few weeks out from world champs so it’s been an entire season building up to where we are now . We did a long phase through January and February getting ready to be able to do the work,” says English. Amberger sees not just the physical gain from this approach, but a mental gain as well. “Coming off of many years being self coached, I didn’t have an understanding of what I could do in a workout. Cliff would start me off with 1 hour of tempo at the start of the year. By March we are doing an 1:40 to 1:50 and getting these kind of workouts in July up to 2 hours,” he says. “Having known I did that earlier in the year without as much race fitness it seemed easy for the mental approach to say, ‘I did this back then, I should be able to do it now’ rather than in July being hit with 2 hours of tempo.

After his four week stay in Brisbane, Amberger returned to the US in late August and has been based out of Bend, Oregon. This gave him only a short time to put the final touches on the training, plus he has decided to race the Hy Vee Triathlon the week prior to 70.3 Worlds. “We didn’t have a ton of time when he came back from Australia. We were looking at one block of training,” said English. “For this block it was mainly just get back from Australia and back into the training, so you kind of do a week of aerobic stuff and longer rides. Then getting into the very specific tempo, holding race effort on hilly terrain.” Amberger replicated the sessions he had done in Brisbane with more 4 hour rides accumulating time at race effort. His session in Bend on August 23rd is another example of using very race specific efforts.

Some athletes that use power meters only glance at their numbers on occasion, Amberger believes that he uses his Quarq more than most due to the simple fact that he is often on his own. “I probably pay more attention than most. I’m always in a situation where I’m pretty much first out of the water. Pretty much straight out of the water I’m looking at my Quarq,” he says. English explains that on a hilly course athletes need to set a power range, and again highlights the importance of the downhills. “On race day you’ll have a bit of an upper range that you’re looking to hold and a lower range you’re looking to hold on the downhills,” he says. By keeping in a range you have practiced in training you can pace your effort as evenly as possible. “I know what I can and can’t do and what’s realistic,” says Amberger. As a smaller athlete, Amberger feels the course in Tremblant is well suited to him. “Typically the harder the course the better it suits me. I’m a small guy so the more watts per kilogram (i.e. climbing) that comes into play, the more the course suits me. Mt. Tremblant fits that criteria.

While it may look like he is in an all-out mode on the bike, there is strategy and tactics being played out. “Depending on who’s in the field, my plan is to stay in front and build as much of a buffer as I can for the run. Or wait for a couple of the guys in the front group. At Tremblant there are 54 other guys racing so tactics come into play.” While his attacking style may look reckless, it is controlled. “You just have to stick to what you know you can do in training. Maybe sometimes you can be a bit daring and raise the bar. And that’s how we all progress and go that bit further, but it’s very much controlled,” he says. Amberger also believes that the numbers from his Quarq can inspire him to achieve more. “If the feeling is good and the numbers are good it can motivate you to push. Which can be a bit dangerous, but of the same token you’re heading into a world championship.” Amberger looks at the two-time defending 70.3 World Champion Sebastian Kienle as an example. “Look at the guy who’s won it the last 2 years, he didn’t win it by not taking any risks.”

Don’t think that Amberger simply started training at this level just yesterday. It has taken the rising star years to reach the level where this type of training is even possible. Starting as an ITU racer, it was his lack of results during his first season of non-drafting racing that lead him to focus on the bike. “When I started racing non drafting [in 2011] it was just embarrassing. I was just getting torn to pieces by the guys who’d been doing that style of racing for awhile,” recalls Amberger. “So 2012 was a season where it was just like ‘Ok, this is all about the bike’.” He put in tremendous miles on the bike, up to 350 to 400 miles a week. That long term approach is what set the foundation for his current level of training and racing. “You can’t just get into this specific bike work without any foundation. It’s definitely a long term thing you need to buy into miles before you can think about getting fast. You have to do that apprenticeship,” says Amberger.

After pushing the miles, Amberger looked to English to raise the bar higher. “I decided to get a coach after 2013 because I didn’t know what else I could do to improve my bike. I’d done all the miles I could do, mentally I couldn’t imagine doing more miles, so it was like something needed to change. And that is where the change in training has come in with Cliff.” That change has put Amberger in a position to pull off the best result of his career thus far.

While in the US in June, Amberger also paid a visit to the SRAM factory, meeting up with David Ripley, Technical PR Specialist for SRAM, Triathlon. While at the factory Amberger noticed the GURU Fit System and asked about having his fit dialed in. Ripley, also a fit and performance consultant for 51 SpeedShop, was happy to oblige. “At this level, the athletes are looking for any measure of improvement,” says Ripley. While aerodynamics are key, Ripley believes in fitting for comfort, power and aerodynamics- in that order. Ripley believed that shortening the crank length from 172.5 down to 165 would open up Amberger’s hips, giving him more energy for the run. But rather than make that change immediately, he simply did a series of blind tests on varied crank lengths and a fixed wattage and let Amberger decided which felt best. “We got him on the bike and I set the wattage at 250 or 270 watts. So if it felt easier, it was, because the effort was fixed,” says Ripley. After some quick testing, Amberger decided on the 165 length crank, just as Ripley predicted. To accommodate for a shorter crank, which inherently increases cadence, Ripley also suggested Amberger move to a 54/42 chainring, which he has done.

The race specific preparation done by Amberger is an example of how any athlete can structure their training around their A race. The long term approach to get to a point where truly specific work can be done is not something only the pros can manage. As you look at building your own schedule, use this blueprint to help you achieve your racing goals.

About AJ Johnson
AJ Johnson is the Content Editor and Power Analyst for TrainingPeaks. He is also a USA Triathlon and USA Cycling certified coach. A jack of all trades in endurance sports, he has raced everything from IRONMAN and marathons to road, mountain, and track cycling. A former freelance writer and editor of TRI and ROAD Magazines, when not editing or writing he spends his time with his family or out on long rides to think of more great content for TrainingPeaks readers.
Visit AJ Johnson's Coach Profile
#IRONMAN-70-3#TRIATHLON