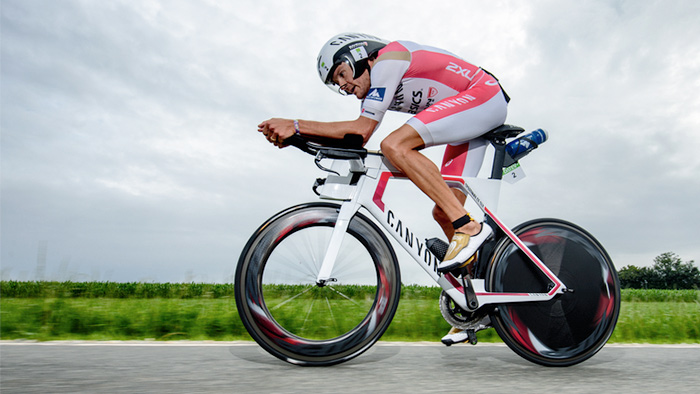 German triathlete Jan Frodeno continues to push the limits of what he can accomplish in the sport. His drive to win is matched only by his dedication to the work that has to be done to achieve his goals. Learn how he set up his 2016 season, how he plans his training, and the best advice he has for age group athletes.

Jan Frodeno has continually shown that he is willing to set big goals and put in the months and years of training to achieve those goals. Through planning, tracking, and a willingness to stay focused on what works for him, he has won an Olympic gold medal, the IRONMAN 70.3 and IRONMAN World Championship.

This year, he has had to make some changes to his season plan, but he still feels like he has more to give to retain his title as the IRONMAN world champion.

After his win in Kona, Frodeno needed some time away from structured training. Though his coach set up workout just two and a half weeks after the race, Frodeno simply went out to do his own thing. “I needed was some time, especially running, biking all these things without time, without power, without any sort of restraint just to find some pure enjoyment of the sport,” he said. By November, he and his coach sat down to discuss the plan for 2016 and on Christmas Eve, Frodeno began structured training.

His season was set out, with the main goal being to defend his title as IRONMAN world champion. Even as the defending champion, he still needed to validate his spot by finishing an IRONMAN. But Frodeno also wanted to race Challenge Roth, meaning Kona would be his third IRONMAN of the year, and there was the allure of the Triple Crown. Then, things began to change quickly. “A lot of things changed,” recalls Frodeno. “The Triple Crown that was announced as very late changed to be very early- in January. That basically meant in a short time we have to beef up the training as much as we can. Then at that time there was still IRONMAN Melbourne, which was going to be an option to give me time to prepare for Roth, that then got toppled over. (The race was cancelled due to a scheduling conflict)Then I wanted to go to South Africa and tore my calf. It’s been a bit improvised, but I think we’ve done alright.” Frodeno ended up validating his spot for Kona by placing second at IRONMAN Lanzarote in May.

With defending his Kona title being priority number one, racing Challenge Roth was a bit of a gamble. “It was always going to be risky because it does push you another two weeks later than IRONMAN Frankfurt, it wasn’t ideal. And doing a third IRONMAN certainly isn’t ideal. But I do feel with the science being evolved these days, you can measure and track your recovery good enough to be able to make a third iron-distance race fit, even though not all three of them will be at the ultimate level of your personal fitness.”

Frodeno was pulled to Roth due to it’s incredible atmosphere and his belief that it was good for the sport. “I feel it’s in a professional’s best interest to keep two series alive and to support both. Competition is not only healthy amongst athletes, but also amongst races,” he says.

Plus, being German and racing in front of his home crowd was a big draw. “It’s just a legendary race. The atmosphere is second to none. It’s a small village that’s set alight with triathlon that makes the atmosphere around any other race seem non-existent,” he says. However, there is a drawback to all of the attention and build up to such a big race. Mentally and physically Frodeno was exhausted after the effort. “Roth was massive, the support is massive there, but also when you’re German racing in front of a home crowd and the attention around the race is huge,” he says. “I was dawdling about for about two weeks after just because it took a lot out of me mentally. I needed a bit of family time and a few trips to Barcelona to switch off a bit.”

Yet Frodeno did not completely stop training and immediately focused on Kona. The night after the race he got on his trainer to loosen the legs.

Working With His Coach

Frodeno and his coach Dan Lorang work in weekly blocks, separating it as a four days for the week and three for the weekend. They talk beforehand about some key sessions, but there is no single workout that they repeat as a key marker session. “There’s no key sessions that we repeat really what we do,” he says. “The difference from anyone else is that we do it five weeks in a row every day.”

The closest they get to a single repeated session is a fartlek-style bike and long run on Sunday. “We will go well in excess of 30k in under two hours and the pace will drop to 3:25/km (5:30min/mile) and then just fluctuate back to 3:55/km (6:18min/mile) or something like that.”

To gauge each session, he and his coach use several metrics. “We generally look at power versus time and cadence on the bike. Because of the terrain I’m offered at home in Spain, we work on pace on the run.”

They do not use heart rate often, but in Kona they track it and put a cap on his heart rate due to the extreme conditions. His coach is constantly monitoring his sessions to offer feedback and often replies immediately after Frodeno posts a workout. “Yesterday I was doing a brick and I sat down, opened my protein shake and got a text from my coach saying, ‘The data looks good, I’m off to bed.’ So it’s very constant.”

His coach also uses that data to change the schedule if he needs to. “He keeps me guessing until the last moment just because he often readjusts the program according to the fatigue and the TSS from previous sessions,” says Frodeno.

For his part, Frodeno does what is on the schedule without question. “I never really shut anything down no matter how bad I’m feeling, unless I’m feeling sick.”

He and his coach stay focused only on what is working for him and what does not. They have no assumptions about how an IRONMAN athlete should train and instead focused only on what worked for Frodeno. “We took it as a bit of a gamble, my coach and I, to decide not to look at what other guys do,” recalls Frodeno. “It still seems very fashionable that every triathlete has the same structure all over the world. They look for an edge simply by doing more. We said, let’s look at the physiological demands and try and create a truly individual program as to see where my weaknesses are, where my strengths are, and take a bit of gamble to not see that we are using the program that somebody else has created for themselves.”

This belief is reflected in Frodeno’s advice to age group athletes. “Find a good coach who cares to help you look at what you need and what the race needs.”

That type of consistent training, day after day and year after year is what has lead Frodeno to feel that his body is just now adjusting to long-course training. “I feel I’ve economized a lot,” he says. “I feel like it’s only this year that my body has arrived at IRONMAN racing. From all the data we see, from the pace on all the long runs and also the amount of fatigue I have after, especially after long running sessions. It’s just come to a whole new level. Same thing on the bike, it’s the first time since I’ve started training for this long stuff that my heart rate has significantly dropped and adjusted during long intervals. I feel like that will give a more sustained performance and I hope I can translate that on race day. ”

Despite a convincing win last year, Frodeno believes he has a lot of areas where he can be better. Last year, he got sick a few days out, and his race was done on what he called, “shaky legs.”

With another year of training and his body coming around to the demands of the race, Frodeno is looking forward to putting out an even better effort. “To be honest, I feel there’s lots I can improve from the race last year. That’s not meant to sound arrogant, it’s meant to reflect what I’ve done with my training.”

Plus, he is not feeling the pressure that has caused many defending champions to falter. On the men’s side, only four athletes have successfully defended their title. Having raced in several different world championships and the Olympics, Frodeno is adept at handling pressure, though he says he’s not feeling any this time around. “So far I”m not feeling any pressure,” he comments. “I’m just loving being here and having a great time with my training mates, my team, and I’ve really felt a special atmosphere coming to the Big Island which is still our proving ground. At the moment it’s more of a happy, relaxed feeling and just looking forward to the race.”

Despite all of his success, Jan Frodeno continues to push himself to find the true limits of his capabilities. Working with his coach, he stays focused on what works best for him and fine-tuning his training. With another solid year of training under his belt and his relaxed but confident outlook, Jan Frodeno is well prepared to defend his title.

About AJ Johnson
AJ Johnson is the Content Editor and Power Analyst for TrainingPeaks. He is also a USA Triathlon and USA Cycling certified coach. A jack of all trades in endurance sports, he has raced everything from IRONMAN and marathons to road, mountain, and track cycling. A former freelance writer and editor of TRI and ROAD Magazines, when not editing or writing he spends his time with his family or out on long rides to think of more great content for TrainingPeaks readers.
Visit AJ Johnson's Coach Profile
#IRONMAN#TRIATHLON