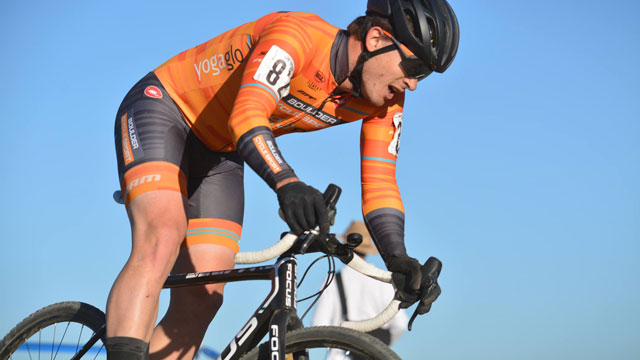 If the weather isn’t cooperating or you have limited time in the early season, try doing your intensity workouts first—you can catch up on base miles later.

As the winter season creeps closer, it’s time to begin the daunting task of planning next year’s training schedule. A grand plan can help you stay on track, putting each week’s workouts in the context of your overall season goals and objectives. But for mountain bikers who live in colder climates, training specifically for mountain biking in the winter can be a challenge. Trails are covered in snow, or too muddy to ride. A lack of daylight hours prevents longer workouts before or after work. Often times, a traditional base training plan can quickly go off course, simply because there aren’t the right conditions available to ride long, slow, steady hours in the winter.

Intensity-First training, sometimes called “reverse periodization,” has been around for a long time. Rather than starting the training plan with longer rides, the method states that you should start with short, intense, and high-quality workouts that will lead to specific results. These workouts can often be done on the trainer, or on a quiet stretch of dirt road or pavement away from ice, snow, and traffic.

Athletes tend to worry that minimizing longer rides during the winter will sacrifice gains that cannot be made up for later in the year. But if the athlete is working towards a late summer goal such as the Leadville 100, the need for base miles in January or February is probably less than they may perceive. Building that volume into the plan when the weather improves will make their plan easier to follow, and thus more likely to succeed.

While endurance MTB races often take over four hours to complete, they have little in common with long, steady base miles on the road. Our races are normally hilly, discontinuous efforts on steep grades. Rather a set number of hours in zone 2, the races tend to be chunks of near-threshold efforts followed by rest periods. Sometimes, a race effort is so discontinuous that it looks more like a series of bursts than it does an endurance ride. Use this as reassurance that getting away from your base miles is not sacrificing specificity.

Plan Workouts to Match Your Races

Taking individual components of your races and breaking them down into workouts can be a productive way to plan your early season sessions. Most mountain bike races have sections of above-threshold riding (often at the start), low cadence efforts (on the climbs), and punchy efforts (traversing on singletrack). Use these efforts to design sessions that are achievable either on the trainer, or can be completed during a shorter ride outside. Completing two to three appropriate and well-planned workouts each week will be attainable even for athletes with the minimum amount of time to train.

A big concern for those who eschew base miles in the winter is of excessive weight gain that will be harder to budge come the summer. This shouldn’t be a concern if you’re eating the right diet; use this part of the season to focus on how to improve your eating. Certainly better than riding mindless miles on the road. Controlling your portion size is the simplest way to get started, and provides the easiest method to alter your calorie intake based on the day’s energy expenditure on the bike.

How to measure early season training

Without the huge amount of volume that comes with a big base build, your Performance Management Chart might look a little lackluster compared to previous years. It is convenient to chase CTL as a benchmark of early season training, but it’s not always the best indicator to measure progress on the bike. Use your previous season’s racing to pinpoint particular weaknesses on the bike, and then design workouts to fix those problems. For example, if your one-minute power is lacking, then set that as an early season goal, and track your progress by looking at peak powers instead.

When to Start Logging Base Miles

As the weather improves and the daylight increases, it will be easy to find more time for riding. A traditional periodization plan suggests that this is the time to reduce volume and increase intensity, but having those sessions already done, you can focus on enjoying the Spring season instead. You’ll need enough time before your first major race to build your endurance, drop any excess weight you didn’t shift in the winter, and get comfortable back on the trails. Now isn’t the time to stop the intensity sessions though; if your races demand threshold or above efforts, these workouts need to stay on your calendar all the way through the summer.

About Chris Baddick
"Chris Baddick is a British professional mountain biker and coach based in Colorado, USA. When he isn't racing his bike, he can be found coaching mountain bikers and cyclocross athletes of all abilities. Reach out to Chris at coaching@chrisbaddick.com
#CYCLING#MOUNTAIN-BIKE