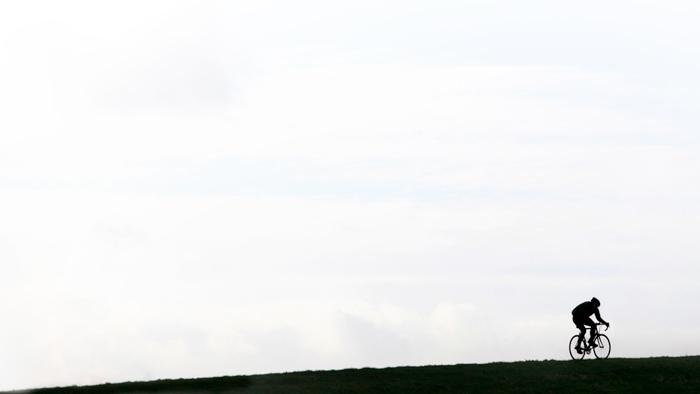 The Myth of Winter Base Training For Cyclists

Many cyclists look to the winter as a time to build their base fitness. However, this long held concept may not be the most effective way to train during the colder months. Coach Jim Rutberg explains why you don’t need to put in big miles to improve your fitness.

Traditional aerobic base training needs to go the way of the dodo. Long, moderate intensity rides are fun and good to incorporate into training, but even if you’re a pro it is a fool’s errand to devote the winter to low-intensity training in the hopes of building a stronger aerobic base. For the rest of us who are time-crunched amateur racers and enthusiasts, traditional base training is a waste of time.

The premise of aerobic base training is that accumulating a large volume of work at a low to moderate intensity will result in increased capillary density (greater perfusion of oxygenated blood into muscles) and greater mitochondrial density. The latter is important because more and bigger mitochondria in muscle cells increase your capacity to break down carbohydrate and fat into usable energy more quickly. Processing more fat and carbohydrate per minute through mitochondria increases maximum sustainable power or pace. It also means you can operate at a lower percentage of your VO2 max at your “all day” pace, which may help you rely on a higher percentage of fat for energy and conserve stored carbohydrate. Those sound like the exact goals of endurance training, so what’s the problem?

As an endurance athlete you have already habituated to a certain volume of weekly training hours, likely because that’s all you have available. Training the same number of weekly hours (because you don’t have the time to add more) at lower intensities produces a lower total workload than you have already adapted to. As a result, it won’t stress your aerobic system enough to stimulate a positive adaptation.

When base training works, it only works because increased training volume contributes to greater total workload (or at least greater focused workload) despite reduced intensity. These longer rides are slower because of the inverse relationship between intensity and duration. You can go harder for shorter durations, but as rides get longer sustainable intensity naturally decreases. When volume is held basically constant by your training availability, reduced intensity only results in reduced workload, and therefore reduced training stimulus.

You Don’t Need a Huge Aerobic Base Anyway

While time-crunched athletes struggle to build a big aerobic base, the good news is that most amateur and masters racers simply don’t need one to win or be competitive in criteriums, road, cyclocross, and mountain bike races lasting 45 minutes to 3 hours.

Your limiting factors are your power at lactate threshold, your power at VO2 max, and how long you can maintain those intensity levels. All three can be improved with a lower volume (8 to 10 hours a week)and higher intensity program that includes a mixture of 8 to 20 minute lactate threshold intervals and 1 to 4 minute maximum-intensity intervals, along with some endurance and recovery rides, of course.

The reason pros still need to spend a lot of time combining high volume with high intensity is that they need to make race winning moves after 200km of racing. Aerobic endurance is a limiting factor for them because of the power demands required in the final hour of much longer elite-level events. You’re not a pro and you can be completely prepared for the demands of your shorter events without a huge pro-style aerobic base.

Even ultra-distance competitors, like 100-mile mountain bike racers, 200-mile gravel racers, and Ironman triathletes, benefit more from training that elevates power/pace at LT and VO2 max compared to performing more volume at low intensity. In a well-trained endurance athlete more volume at low intensity will no longer result in greater mitochondrial density (they’ve already adapted to the intensity level required)1 (Dudley, 1982). To get faster they need to stimulate mitochondrial development with higher intensity efforts.2 (Burgomaster, 2005) Very long training sessions are still necessary, but more from an experiential standpoint than a physiological one.

Focusing your training on a particular intensity for a block of time is the basis for periodization, and there are benefits to focusing time at several different intensities. In that sense, base training is just a block of low-intensity endurance training, and the only real problem is that it’s typically too long. For amateur athletes, two- to three-week endurance blocks can and should be incorporated into training throughout the year. That’s different than a single two to three month block of low-intensity riding, during which you will see your power and pace at lactate threshold and VO2 max decline significantly.

The old premise of periodization was that you needed the big base of aerobic fitness before you could handle the stress of higher workloads. Hence, the schedule of base training first, followed by lactate threshold training, and then race-specific high-intensity speed work. The more modern view is that the pathways to producing energy are intertwined and you can improve performance in either direction. For instance, Helgerud showed that high-intensity efforts are more effective for improving power at VO2 max than moderate-intensity training3(Helgerud, 2007). Researchers like Burgomaster, Gibala, and other have shown that these same short, high-intensity intervals improve oxidation of fat and carbohydrate by mitochondria to a similar degree as traditional, lower-intensity endurance training, but in a fraction of the training time. Practically what this means is that by working at the highest end of the intensity spectrum you can improve performance at all intensity levels below that, making it a very effective use of your limited training time. Similarly, lactate threshold workouts improve power at threshold and improve power for endurance intensities, too.

Base Training Was Never About Improving Fitness

There is some validity to the notion that too much intensity can lead to overtraining (better thought of as under-recovery) and increased risk of injury, so one school of thought is that a long period of lower intensity is safer than year-round structured training. There was a time when this was smart advice, but now that we have better tools for measuring and monitoring workload, fatigue, and recovery, the risks of pushing an athlete (or pushing yourself) over that edge is much lower. And for time-crunched cyclists, both the need for prolonged recuperation and the risk of overtraining are already reduced because your busy work and family schedules result in relatively low training volume and abundant time for recovery.

There’s a difference, however, between desiring less structure and needing less workload. If you want a break from intervals, that’s fine. Let your mood, the terrain, the wind, or the group you’re with dictate the intensity; just make sure there’s some intensity!