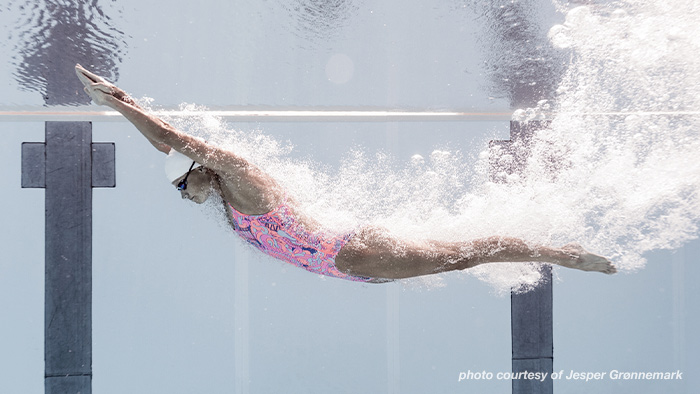 Danish triathlete Helle Frederiksen started her triathlon career as a short course specialist, making the Olympic Team in 2012. She then transitioned to long course racing and has won many of the biggest races in the sport. Read her words on how her coach, Joel Filliol, was instrumental in giving her the confidence and guidance to make her transition a successful one.

A coach, capable of successfully guiding an athlete through the unknown transition of short distance ITU racing into long distance non-draft racing, is definitely a good coach. A coach, capable of the same, yet enabling them to develop a level of self-confidence that the previous six years of racing was unable to deliver, now that is not just a good coach, that is a great coach.

I would regard my coach, Joel Filliol, as the latter. He is one of only a few coaches in the triathlon world that I would say are truly great high performance coaches.

My relationship with Joel started in 2011. Like a lot of new relationships, it took some time before we were both fully up to speed. It was a stressful period, qualification for the London 2012 Olympics were yet to be secured and many months of training, travel, and racing were needed. I remember it was a tough time but I’ll never forget the calmness Joel demonstrated.

In that first year of working together there were highs, lows, good results and not so good results, but I knew one thing, Joel possessed the coaching capabilities to bring out the best in me. Tough times became exciting times. With the London 2012 Olympics successfully slated inside my portfolio of sporting accolades it was now time for me to spread my wings and explore the world of non-drafting triathlon.

Joel supported my every decision. We talked, we thought, we planned and we wondered, but together as a coach/athlete team we felt I could have an impact on non-draft triathlon and make this my place now. And so this is what we went for.

Today, four years on from the London 2012 Olympics, I can proudly call myself a six time IRONMAN 70.3 Champion, winner of the prestigious $100,000 races Hy-Vee Elite Cup and Challenge Bahrain, along with currently holding the world’s fastest time for 1.9km swim, 90km bike and 21.1km run in 3:55:50.

I think it goes without saying, #ThanksCoach, and here’s to many more successes.

Thank your coach and let them know how much you appreciate their help.

About Helle Frederiksen
Helle Frederiksen is a professional triathlete and current holder of the fastest half-distance time by a female 3:55:50 (Challenge Bahrain 2014). A London 2012 Olympian, 6 x IRONMAN 70.3 Champion and a previous winner of the prestigious Hy-Vee Elite Cup and Challenge Bahrain, Helle holds a Bachelor Degree in Sports Science and a Master's Degree in Human Nutrition. Alongside her professional racing career Helle acts as a performance coach to multiple amateur and elite athletes and is viewed as one of the sports leading profiles, passionate about educating and inspiring multi-sport enthusiasts.
Visit Helle Frederiksen's Coach Profile
#INSPIRATION#SPORTS-PSYCHOLOGY#TRIATHLON