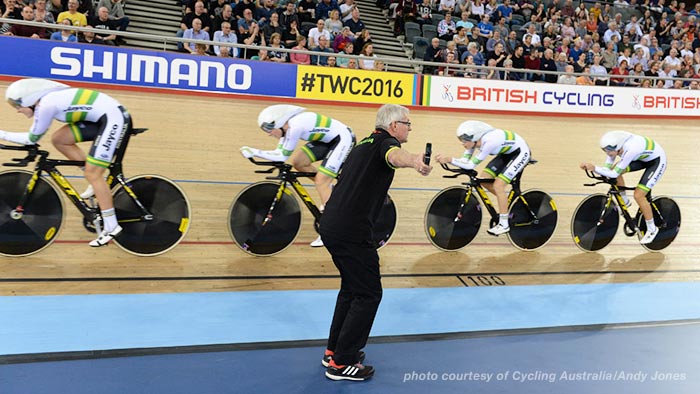 How The Australian National Track Team is Preparing for Rio

The Australian Women’s Pursuit team will be lining up at the Olympic Games with the goal of winning Gold. Along with the hours spent training, their coaches have worked hard analyzing data and creating the right plan for each athlete. Read how the high performance team has been using TrainingPeaks to prepare their athletes to achieve their dream.

The Australian National Track team has a long history of competing at the highest level of the sport. In particular, the women’s team pursuit has been one of their strongest events. The team won Gold at the 2015 World Championships, solidifying their place as medal contenders for the 2016 Olympic Games in Rio. I talked with two team coaches, Gary Sutton, the Head Coach of the Women’s Endurance Track Team, and Katie Slattery, the Senior Physiologist at the New South Wales Institute of Sport to learn how they have leveraged TrainingPeaks to analyze and plan for the team.

While athletes are putting in the hard work on the track and winning medals, it is the coaches at the Australian Institute of Sport (AIS) who are creating the right program to prepare the athletes for success. With several different coaches working together to create the best athlete performance, it is critical to have a single place for each coach to view the same data. “We are using TrainingPeaks as a central data hub where all the athletes upload their power data,” says Slattery. “They all have an SRM on their track and road bikes and the girls upload the data to TrainingPeaks. It allows us to connect all of the AIS coaches and the staff, but also their State and home coaches as well.”

Having a way to quickly and efficiently view data and communicate not only with coaches but also each athlete is critical for Sutton. “What I love about TrainingPeaks is the communication that we can have and it doesn’t matter where they are. The first thing in the morning, I can see the data, read the comments, and get back straight away if I need to,” he says.

The athletes have also seen how data and TrainingPeaks can help them achieve their goals, though it was a bit of an issue early on. Some athletes struggled with putting all of their data into TrainingPeaks, until Sutton found a very compelling way to motivate them. “I came up with this wonderful idea that if they didn’t do it, I would dock them a month’s pay,” he recalls. “It’s marvelous how they have changed. Now, it’s not an issue and no one has lost any money.” One athlete in particular was so worried that she used the track’s wifi and Autosync feature to ensure her data was uploaded immediately. “They’ve really taken ownership over their TrainingPeaks and they use it as their diary. They feel naked if they don’t have power data,” says Slattery. 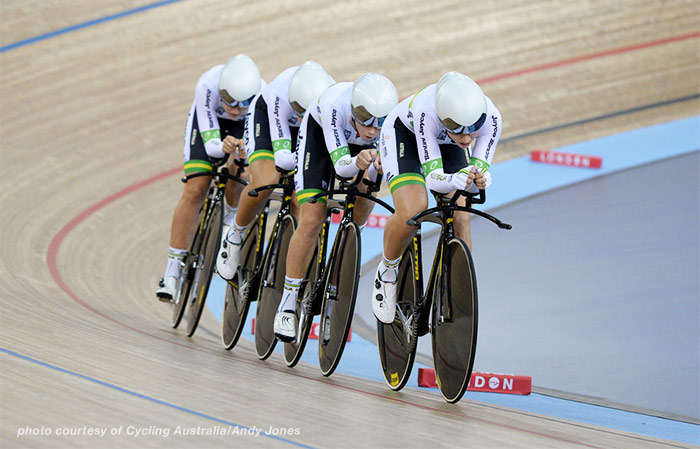 One key to success is preparing each woman individually, but also getting them all on the same page to perform as a team. Each athlete needs to be in peak condition, but they all have their own journey towards reaching the goal. The perfect training for one athlete may be too much for another. Sutton and Slattery look at each athlete individually to find the right training program for them. “We’ve got about two years of solid data now to look back on,” says Slattery. “So doing some retrospective analysis we understand a lot better than we ever have before about how each individual girl adapts to training. We can pin point, or better understand and modify training programs based on that.”

Both Slattery and Sutton have examples where they have modified training programs for specific riders. “Weekly, we look at how the Chronic Training Load (CTL) is building and look at their peak training load,” says Slattery. “In the past, we’ve run into problems where their CTL is built too quickly. With one of the girls we had to take it back a step and rebuild her fitness very slowly. Now she’s able to 100 percent cope with the training load that the rest of the team has been doing.” Sutton gives an example of a rider who can push beyond what the data says she is capable of on the day, but then pays the price later. “We have one athlete who, looking at the data, should be flat out on her feet,” he says. “But what happens is she still delivers. We’ve challenged her when, if we go off the figures, she shouldn’t be doing so well. But it hits her about three days later.”

For the Olympic Games in Rio, the coaches will be looking back at the different approaches they have taken for major events and take the lessons learned to create the best plan. “When you have four athletes in a team and you need them all going fantastic on a one day, that happens once or twice a year. It happened for us in Paris (the 2015 World Championships)”, says Sutton.

Having historical data is crucial for learning what worked in the past and what did not. “When we are thinking about what we are going to do in the lead up to Rio, some of it is having a look back at what we did and some of it is pulling data from TrainingPeaks to have a closer look at it,” says Slattery. “Looking at simple stuff like power, cadence, heart rate of our key sets so we can compare the build up from 2014 Worlds, 2015 Worlds and looking at the key differences in those lead ups. So now in the lead up to Rio, we can adjust so we can get a better performance out of them.” Sutton agrees saying, “We know what worked in Paris. Then we tried a few different things leading into the last worlds and it didn’t work, but we needed to do it. It’s good to be able to look back at that because know what works.”

With the help of TrainingPeaks, the coaches supporting the Australian women’s pursuit team can dial in each training session and create the right program to help the team achieve their goal. The team will line up, knowing that they, and their coaches, have done everything they can to take home the Gold.

About AJ Johnson
AJ Johnson is the Content Editor and Power Analyst for TrainingPeaks. He is also a USA Triathlon and USA Cycling certified coach. A jack of all trades in endurance sports, he has raced everything from IRONMAN and marathons to road, mountain, and track cycling. A former freelance writer and editor of TRI and ROAD Magazines, when not editing or writing he spends his time with his family or out on long rides to think of more great content for TrainingPeaks readers.
Visit AJ Johnson's Coach Profile
#CYCLING#ROAD