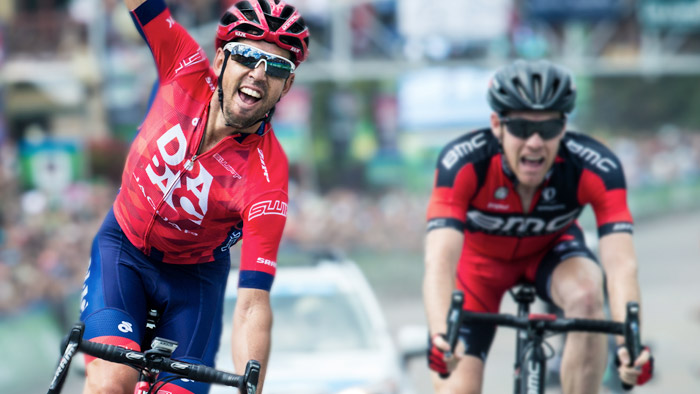 How Team Drapac Prepared for the USA Pro Challenge

Australia’s Team Drapac will be looking for success at this year’s USA Pro Challenge. Team Performance Director Keith Flory gave us some insights into the selection of the team and how they trained for the demands of such a difficult race.

Just one week after finishing the Tour of Utah, Team Drapac will be one of 16 teams lining up at the start of the USA Pro Challenge, a seven day stage race through Colorado. For a team based in Australia, the obstacles are many. Travel, terrain, and altitude are all factors they have to overcome. How does a top level team get ready for two difficult week-long stage races when faced with these challenges?

Before each race, the team sat down to discuss which riders to select. This process started well before the stages are announced. “Firstly, we assess the expected demands of the race,” says Drapac Team Performance Director Keith Flory. “When we draw up the initial long list of riders, it’s based on our knowledge of the races from previous years – both from first hand experience of being at the race but also some additional research.” After the route was announced, Flory and his staff refined their selections to make the teams that would contest each race.

Much of this entails breaking the race down. “For a race like Utah, we know it will contain a heavy component of climbing and obviously at some fairly extreme altitudes and potentially climatic extremes too (heat). Based on this, we’re looking at a core group of riders who can sustain high powers for extended period of times to cope with the long climbs.” Flory explained. Going a step further, the team looked to specifically target stages with shorter, punchier climbs- which requires a different type of rider. “The power profile of riders who were in the frame for these stages was different. Higher power production in the 30 second to 2 minute ranges.

Often, Flory is not with the riders. The team only races in Australia for the first six weeks of the season, then they race at events around the world. Of course, he stays in touch with his athletes throughout the year. “Obviously TrainingPeaks gives us such incredible insight into the rider’s training and racing performance. This is our first port of call re: communication. After that it’s ‘traditional’ communication techniques, albeit via modern technologies like Skype,” he says. Prior to beginning their preparation for these two races, the team had a 6 week mid-season break. The riders selected for Tour of Utah and Pro Challenge then did a solid training camp in the US at altitude to prepare. Though together as a team, the riders training is individually tailored. “Each rider has had a different season to that point, so to fit them into one training ‘box’ wouldn’t have been appropriate. Then we’re also looking at each individual and their respective role and goal in each of the stages.” Flory says.

The altitude camp began three weeks prior to Utah and used a stepped acclimatisation protocol. For Flory, altitude was not his only concern. “The impact that long haul travel, the 14 hour flight from Australia to Los Angeles for example, has on the body is often underestimated and we’ve done a lot of work on establishing good practices to maintain general health before, during, and after traveling,” he says. “With this in mind, I wanted the guys to focus on recovering from the travel and acclimatising to a base altitude initially, so reducing the physiological stressors. After a period at this lower altitude, we moved the guys up much higher for the second part of the camp.”

The team line up will change slightly from those that raced in Utah. Again, specific training is applied to meet the unique needs and goals of each rider. “We’ll welcome a number of riders who didn’t do Utah into USA Pro Challenge, so they’re on a different approach program than the guys coming off Utah,” said Flory. “For those that did Utah, recovery is the key. We’re keeping them up at a high altitude as I believe they can still recover well and also prepare for the even higher altitudes they’ll experience at USA Pro Challenge.”

Team Drapac’s detailed approach to preparing for these two major races in such a short time has already paid off. Lachlan Norris took the win in the final stage at the Tour of Utah. While a big victory on a tough stage is always rewarding, it was not the team’s only success. “Looking back at Utah now, there were stages that we can look at and be very pleased with the performance outcomes, even if the ‘win’ didn’t quite come,” said Flory. “When riders are in the top 10 and exceptionally close to the win, its affirmation that the process is working – we just need to keep pushing.”

That push will continue as the riders of Team Drapac ride through the mountains of Colorado. Throughout the USA Pro Challenge, TrainingPeaks will showcasing power files from team riders to give you a closer look at the effort and energy needed to finish one of the hardest races in the US.