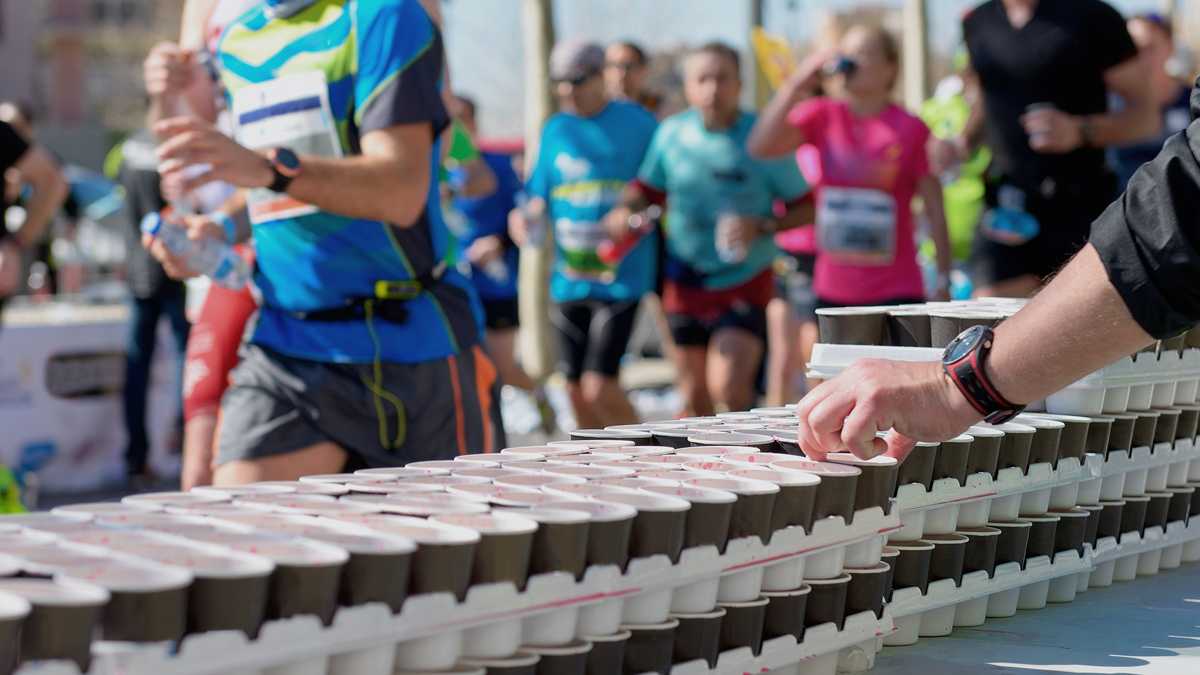 How Getting a Coach Helped This Runner Qualify for Boston

A little expert instruction can make a world of difference. See how getting matched with a coach helped this runner turn an “impossible” goal into reality.

Graham McMahon is a 46-year-old physician, husband, father, and runner living in Chicago. In just four years, he progressed from a first marathon he described as “painful and dreadful,” to running a sub-three-hour race and qualifying for the Boston marathon. We caught up with Graham before his Boston debut to talk about his journey to the start of this iconic race.

Lydia Tanner: Tell us about your first marathon, what happened?

Graham McMahon: Well I actually really enjoyed the first two thirds, and it seemed to be going really well, but then at about mile 18, the wheels came off completely. Obviously, this is a familiar story for newbie runners—despite efforts I’d made to avoid a wall and train for it, I freakin’ slammed into that thing.

When I got to the end I couldn’t walk, and I thought I was gonna die… it was just awful. It seemed like a relatively preventable misery, and it almost felt like an embarrassment that I’d allowed that to happen.

LT: What was your training like for that first marathon?

GM: I was doing probably something like 30 miles a week, four runs a week for 12 weeks. I wasn’t just cavalier about training—I lined up with a plan, it just didn’t work at all. In retrospect it was probably both inadequate long runs, and a poor nutritional plan.

LT: So after that, you got more serious about getting some outside help. How did you meet your coach?

GM: I downloaded a training plan on TrainingPeaks, and there was an option to connect with a coach inside. I didn’t really click with the first coach I was matched with, but then I was matched with Andrew Simmons and he’s been terrific for me. We’ve been working together for three years now: he sets up my plan based on my goals and how I’m doing. We also talk regularly by Skype and text.

I like to think I’m a pretty easy athlete to coach. I’m diligent and disciplined (this is the way you get if you want to get through med school) and I’m also pretty Type-A. If there’s a training plan, it pretty much gets done 95% of the time. But Andrew has also helped make sure I don’t overdo it, and train appropriately while remaining injury-free.

LT: Type-A, huh? When you decided to train for Boston, was it just because it was the hardest, scariest thing you could think of?

GM: Yeah, when I was hanging out in the 3:40’s it seemed like a relatively impossible thing to train for. One of my colleagues had been a marathoner in his 20’s and 30’s, and he got a 3:06 or something like that—I just thought that was the most magical, remarkable and spectacular thing in the world. I thought, “if I can get a BQ I’ll just be so proud of myself.” I take on hard things and do them hard, so here’s a difficult thing, it’s important to me, and I think I can commit to it and get it done.

Andrew was a little more realistic. When I asked him if I should start thinking about  Boston, he encouraged me, though when I asked him if I could make it there in a year, he flat out said “no.” And he was right. I did end up getting a qualifying time that first year, but didn’t make it into the race. It took two years of focused training.

LT: So what did Andrew change about your training?

GM: Well, mostly this was an augmentation of what we had already been working towards in generally improving my marathon times with quality runs. Once we decided to move towards a BQ time, it was a combination of longer “slow” miles, crosstraining, and more speedwork, progressive intervals, and sprints.

LT: What was the hardest part of training for Boston?

GM: I tend to be very impatient. If I’m out there running want to get it done as quickly and efficiently as I can, so holding back for the longer miles can be a challenge. I also work full time and travel a lot, so finding time for my family, work, and training can be hard. Even though the Chicago waterfront is wonderful to run along; those dark, rainy, snowy, icy very early mornings can be really tough.

LT: What was the best part of training for Boston?

GM: I enjoyed the cross-training more than I thought I would, so I ended up doing more and even replacing some miles with more cross training. That really helped my general fitness. We have seen my heart rate come down, and my strength improve.

LT: What did your build for Boston look like?

GM: So my last big race was in Dublin in October where I got my most recent PR of 2:58. (check out the file here). Then I took a bit of a break, and trained almost every day, sometimes twice a day, between December and now, building the mileage to above 70 miles per week, with about 3 hours of cross training weekly.

LT: Your husband is also a marathon runner. How do you juggle that volume of training with his schedule and raising a family?

GM: Finding time for the two of us to train for marathons can be tricky. There are always some tradeoffs to make sure we can both get our training time in, and still have one of us home with our two girls. We’ve also run some marathons and half marathons together, and in those cases we just get a sitter. It’s terrific that we both get to enjoy this sport together.

LT: Did you inspire him to start running marathons or vice versa?

GM: Partly. He came to watch me run the Chicago Marathon. He actually held a sign that said “My Husband runs marathons. I run to Nordstrom”, which was very true at the time! But I think he was inspired by seeing all those people running. He started running a few days later and then began to train with Andrew. He has found running with a charity team to be a real meaningful part of marathoning. He’s run Chicago twice, and he’s got three marathons under his belt, with Chicago and New York coming up for this year.

LT: What advice would you offer people trying to balance kids and significant others’ training?

GM: You have to give and take. Each of you might have very different goals or training volumes, but you just have to make way for each other.

LT: Boston is coming up, are you getting stir-crazy?

GM: Yeah, I’ve got the taper crazies. I also feel like I have more appetite than I should for how much my mileage has gone down.

I was in California yesterday for a meeting and I went for a run around the campus nearby, which felt pretty good. But the previous day I didn’t feel like I could run even four miles! It’s the funniest thing; I’m now super fit, and I have terrific endurance, but your body doesn’t always behave in ways that are completely predictable. It’s disconcerting but you also have to trust yourself and the work you’ve done.

LT: I mean, this isn’t your first marathon, so you probably have a good feel for that.

GM: I hope so! The weather’s not supposed to be so good, so we’ll see about that.

LT: You just have to pull a Desi!

GM: Yeah! I’m excited, and so pleased to be running!

LT: What else have you learned en route to Boston?

GM: I think there are a couple of amazing things about becoming a runner. First of all, just the wonder of what your body can do if you ask it to (and being able to measure it and track it through resources like the TrainingPeaks dashboard is compelling). It still just amazes me, even though I’m a physician and I have a deep understanding of how it works.

The second thing that surprised me is how welcoming and accepting the running community is of people who are extremely diverse. I’ve never found myself being judged, whether I was slow or fast, clumsy or with good form. Whether you’re running a 6-hour pace or a 3-hour pace, you’re welcomed into the running group. I find I don’t have to compete with others; I compete with myself, and people are supportive and encouraging of your continued evolution.

The third thing is that running becomes a way of life. It’s a way to see new cities, meet new people, it’s a way of being that is really good for me.

LT: Well, I hope you enjoy being in Boston!

You can follow Graham on Strava and see his race history here.

About Lydia Tanner
Lydia Tanner is the athlete content editor at TrainingPeaks. She was formerly an editor at Bicycling Magazine and contributor to Bike Magazine, Mountain Flyer, and RedBull. She is a two-time collegiate national champion in XC MTB, and raced the World Championships as a U23. She is perpetually curious about physiology and human performance.
#MARATHON#RUNNING