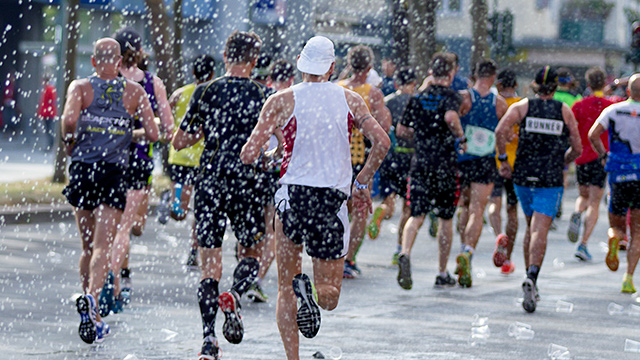 See what a PR-shattering season looks like, by the numbers. Coach Andrew Simmons gives us a season-long view on what it takes to see huge results.

Scott Burns is a 42-year-old amateur marathon runner from the UK, who has been training seriously for the last five years. Until this season he had been using an online algorithm to define and manage his training—but was growing frustrated with seeing minimal improvements in his fitness and race results.

We connected via CoachMatch, and began to work through applying my Zone 2 methodology to his training through TrainingPeaks. Scott ran a 3:33 in October 2017 at the Reykjavik Marathon, and ultimately blew past his goal of breaking 3:30 with a 3:08 just 13 months later in Berlin. Here are some of the major factors in his success.

Zone 2 Training is focused on the idea that your zone 2 days are just as important as your hard Zone 4 and Zone 5 workouts. Running in Zone 2 facilitates active recovery, and allows you to build your base. Metabolically it also teaches your body burn primarily Fatty Acids, helping you maintain a steady effort for a long time (unlike the surge-crash cycle of carbohydrate fuelling). This sort of fat-adaptation is popular and effective among the marathon and ultra-endurance crowd.

In action, Zone 2 training consists of two workouts a week, with the addition of a specific endurance session as part of long runs in the final 6-8 weeks. Endurance work consists of marathon and half-marathon intervals to replicate race day feelings of fatigue. It also allows athletes to test fuel sources and hydration strategies to dial in their race day plan.

By the Numbers: (HR) and Intensity Factor (IF)

Once we got started, Scott was able to steadily increase his chronic training load (CTL) and began having breakthrough after breakthrough. As you’ll see in the 13-month progression below, Scott was able to steadily turn up the intensity at each race while maintaining the same average HR, ultimately dropping over 1min/mile off his pace (and an average of two minutes per month off his marathon time).

Using Half Marathons late fall and early spring allowed us to test fitness without going through the extensive recovery required of a marathon. These shorter races allowed us to continue building a base and working through a series of hills, intervals, and extension workouts. London Marathon was quite hot and the plan for a 3:10 race was out the window by 30km—but Scott adjusted his race plan and managed a 3:14. 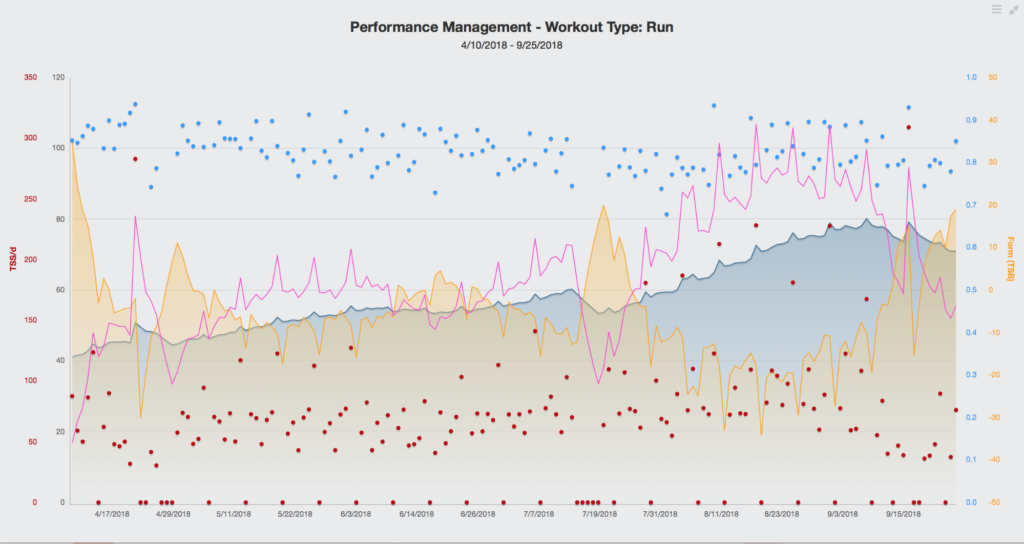 Scott peaked just in time for Berlin, allowing for a perfect 10-day taper. Take note of the steady increase from London (CTL: 72) at far left to the peak at Berlin (CTL: 80). This time frame includes time off for medical procedures, a seasonal break and a full build to a peak and taper.

One of the biggest factors in Scott’s success was his extensive use of tempo efforts of 10-12km, progressing from goal marathon pace to goal half marathon pace. Starting below his fastest pace allowed him to settle in on a sustainable pace very early in the race; his legs were locked in.

Take note of the .42% pa:hr. his heart rate stayed impressively consistent over the course, and remained closely aligned with his pace. As pace is broken down, we can see that consistently hitting his marathon pace in training allowed for flawless execution on race day.

A 151 HR average allowed Scott to stay just outside of Zone 2, progressing slightly into Zone 3. By using disparity training we were able to execute a comfortable and intentional effort in Zone 3. Dive into his splits and we can see how well the Zone 2 methodology pays off on race day! 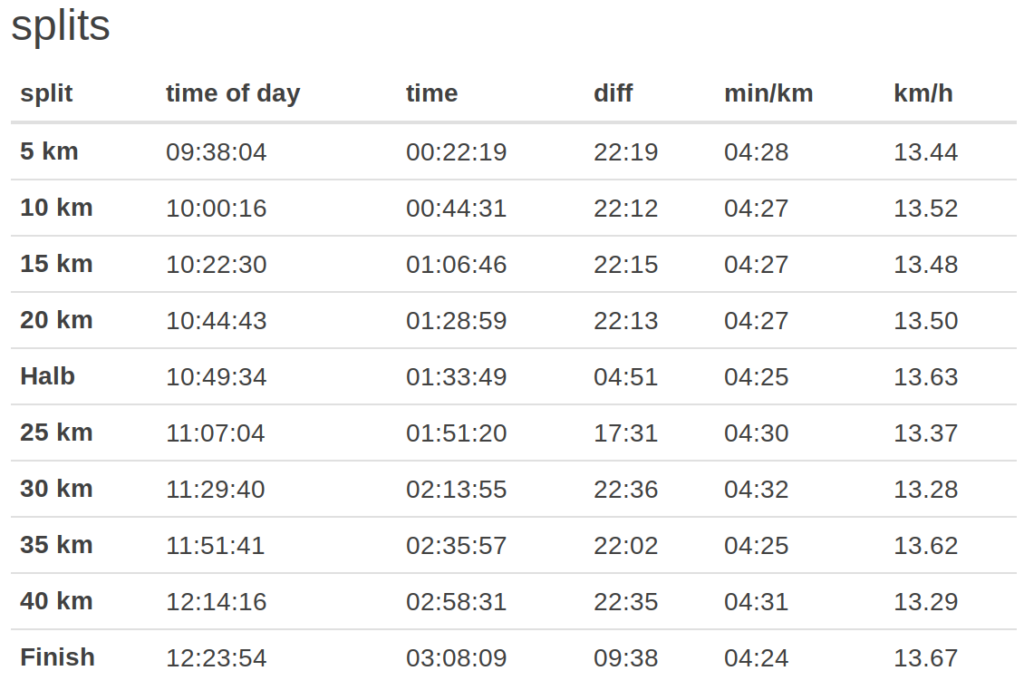 The over/under on his 5k splits was ~:20. This shows that Scott knew exactly how the race should feel at goal pace. That sensation was ingrained early on in his training and repeated weekly or biweekly with specific endurance or extensive tempo workouts.

Scott’s improvement is a direct factor of his hard work and diligence in training; he only missed a total of 7 workouts in 13 months. For his effort, Scott earned a 25 minute PR. Scott now has his sights set on taking his marathon time into the sub-3-hour realm in 2019.

Congratulations to all Berlin Marathon runners on a successful and record-setting day!
Ed. note: athlete’s name has been changed to protect his privacy.

About Andrew Simmons
Andrew Simmons is a USATF Level 2 and TrainingPeaks Level 2 certified coach and the founder/head coach of Lifelong Endurance. Athletes who want to improve their race times in distance running have found major success with his Individual Coaching and Training Plans. Andrew resides in Denver, Colo., where he still trains as a competitive amateur. Follow Coach Andrew on Facebook , Instagram, and Twitter.
#DATA-ANALYSIS#MARATHON#PERFORMANCE#RUNNING