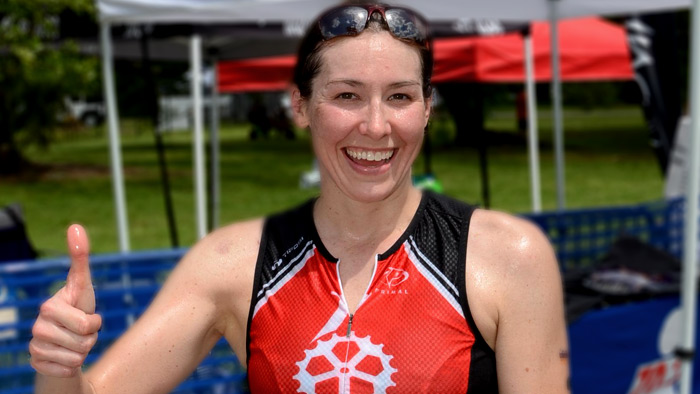 A Two-Year Journey From Beginner to Professional Triathlete

Corrie Kristick started her triathlon journey just looking to stay in shape and have fun. In just two short years the former Division I swimmer shot through the age group ranks and now races against the top pros in the sport.

Corrie Kristick has only been on the triathlon scene for two years, but the 30-year-old Houston, Texas native has already made great strides in the sport. Last year, Kristick was the first place female amateur finisher in four consecutive 70.3 races (Texas, Kansas, Buffalo Springs, and Muncie), earning her IRONMAN®‘s All World Athlete (AWA) Gold award. Her string of results inspired her to make the jump from elite amateur to professional triathlete.

A Division 1 swimmer at Rice University, Kristick used to hit the pool twice a day, six times a week, putting in 10,000-yard workouts. But after graduating, three years went by where she did nothing. “I was out of shape and started running to change my lifestyle. That’s when I found triathlon,” she says.

Like most first-time triathletes, Kristick started out with intentions to just do her best and enjoy the day. Going pro wasn’t on her mind on that day, her only goal was to have fun. “In most all of my races, things don’t go my way,” she says. “I’ve learned to just keep going no matter what, because you might surprise yourself!” In addition to being inspired by the rush of racing, Kristick is also inspired by other women in the sport. “There are so many amazing women who work their butts off. They have families, work full time and still race like gazelles,” she says. “These are the superwomen who inspire me on a daily basis.”

After a year of experience under her belt, Kristick shifted her approach from light-hearted to hardcore. Her goal changed from having fun to getting results and working to join the professional ranks. With the new focus came results, and after four consecutive amateur wins, she reached her goal and made the leap into being a professional triathlete. Kristick made her professional debut this year at IRONMAN® 70.3 Texas, where she placed sixth. Only one week later she raced IRONMAN® 70.3 New Orleans, coming in eighth. “Racing pro means competing against amazing, tough-as-nails women. Some of them have been Olympians. It makes you want to better yourself as an athlete,” she says.

For Kristick, going pro has inspired her not just to train harder and race faster, but to also be a better person. Despite the pressure to get results in an individual sport, she knows that there is more to triathlon than your own training and performance on race day. She wants to be an ambassador for newcomers and, as she says, “to serve as a role model for those who are just getting into triathlon.”

If you had told Kristick last year that she would have won an IRONMAN® AWA Gold distinction, she wouldn’t have believed you. This year, however, she is taking a slightly different approach. “There are no limits to what the human mind and body can accomplish,” she believes. “Winning the AWA award made me hungrier, and even though I have a lot to learn, and far to climb, I know that I can get there.”

As for all that swimming? When your background is swimming at a highly competitive level, it tends to become the last priority. “It hasn’t been much of a focus, honestly,” she says. “Over the past two years, I’ve been putting in time to learn about cycling. At some point, I’d love to put more time back into swimming again.” When that point comes, she’ll be in good hands. Kristick is currently working with Mike Doane, the same swim coach she grew up working with. “He’s coached some of the best swimmers in the world, the USAT National Team and many world champions and professional triathletes.” Now, Corrie Kristick can count herself among them.

About IRONMAN ®
IRONMAN® is more than a family of events, it's a lifestyle. Since the very first race, held on the Big Island of Hawaii in 1978, the series has grown into a movement spanning the globe. Founder John Collins' initial challenge to athletes has become a mantra: "Swim 2.4 miles, bike 112 miles, run 26.2 miles, brag for the rest of your life." For more inspirational stories, training, and race day tips, go to IRONMAN.com.