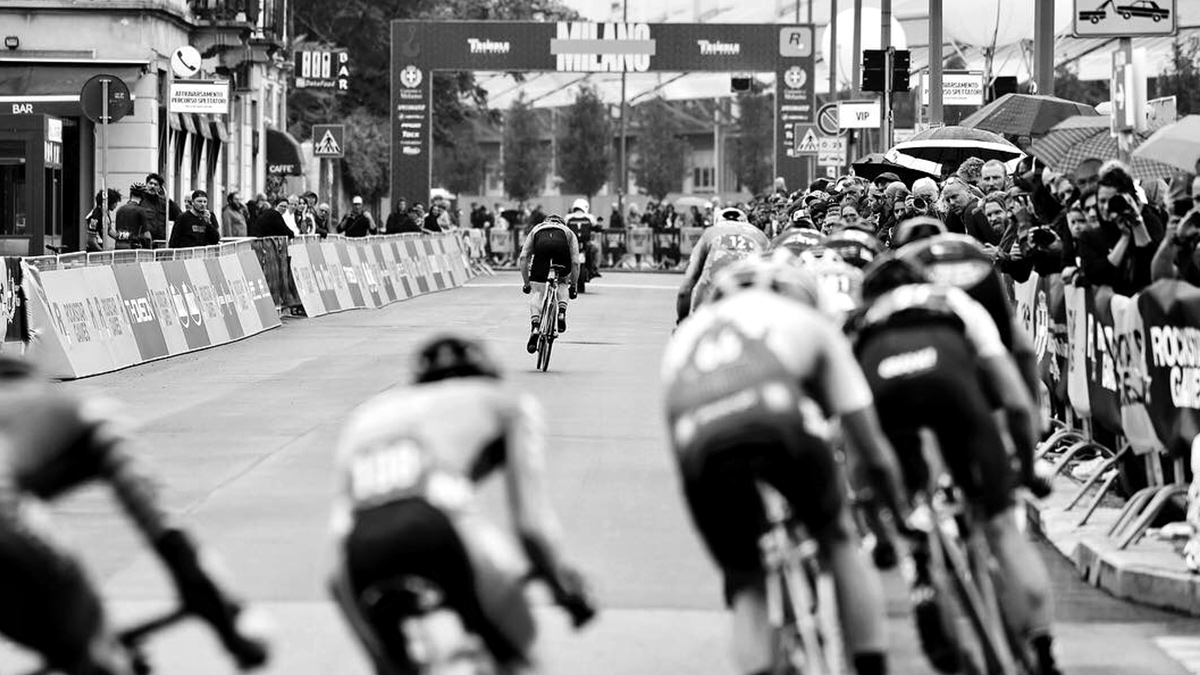 Data Analysis: What Does It Really Take To Race Red Hook?

Ever wonder how much power it takes to race in the world’s most intense fixed-gear criteriums? Wonder no longer. (Hint: It’s a lot.)

If you’ve ever heard of fixed-gear criteriums you’ve probably heard of the Red Hook Criterium Series. The notoriously fast races draw the strongest and most experienced racers to Brooklyn, London, Barcelona and Milano to race through the city streets—sans brakes or gears. Each race is about 45 minutes in length and breathtaking to watch. The relentless pace and high risks create an electric atmosphere that is unique in the world of cycling, earning Red Hook Criteriums a reputation as some of the most spectator-friendly bike-events in the world.

But what does it take to actually qualify for and compete in a Red Hook race? We took a look at the data from Robin Gemperle, a former MTB rider and now fixed-gear racer from Switzerland. With only two seasons of racing fixed-gear criteriums, he has quickly risen through the ranks thanks to his technical skills and quick power. Our analysis will follow him from qualifying through finals at the most recent Red Hook race in Milan.

Hundreds of riders enter the hard-fought qualifying races, also called heat races, which are performed throughout the day before the main event held at night. These qualifying races are a crucial component of the series since they dictate not only whether you qualify, but where you will line up for the start. Because Red Hook criteriums are so short and fast, this start position usually has a big impact on the outcome in the final race.

Let’s explore the race data of Robin’s heat (qualifying) race in Milan. With 10 laps consisting of 9 turns and 1.3 kilometers (0.8 miles), Milan is one of the less technical courses in the series, demanding a consistently high power output. Robin covered the race distance in 18:10 min:sec (Fig. 1) with an average power output of 301 watts (4.42w/kg).

With two laps to go, Robin attempted to break away (Fig. 2) by attacking with a maximal power of 1302 watts (19.14 w/kg). As we can see, his timing was not optimal, and he consistently lost power before being caught shortly before the finish. 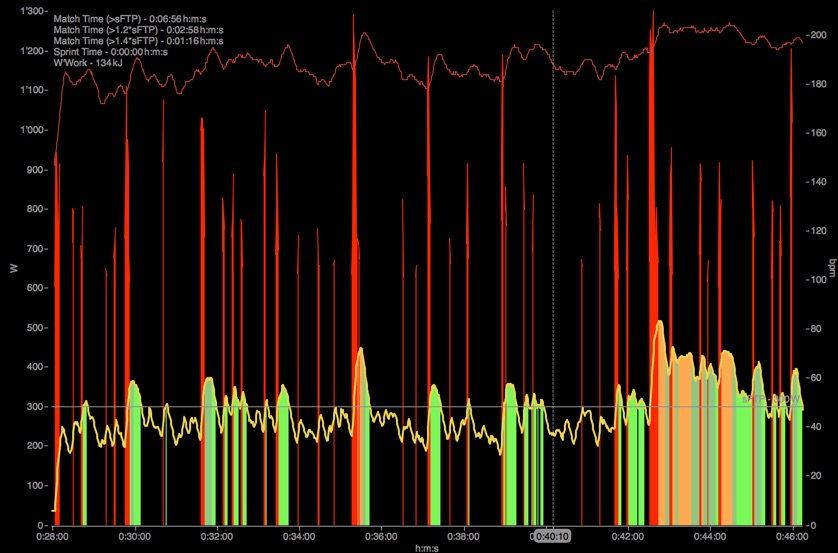 Considering the Matches-Chart (Fig. 2), we can see that Robin spent significant time over his functional threshold power, approx. 2 minutes with an avg. wattage of 450 (150% of FTP). Essentially, Robin went too deep into the red on his attack, expending all of his glycolytic capacities too early and factoring himself out of the sprint. However, he nonetheless finished in 10th place (enough to qualify for the final) and was satisfied with the outcome.

After his heat race, Robin immediately got to work replenishing lost fluids and refilling glycogen storages. He reported feeling like he recovered quickly, which speaks to his solid fitness levels. He was confident that the race in the evening could potentially turn out well.

Grande finale by the numbers:

Qualifying in 10th put Robin in 40th position for the start of the final, which is not optimal for the fast course in Milan. As we can see in figure 3 and 4, Robin had to invest a lot of effort to reach the front; it took him almost half the race to make it into the top 10.

Fig. 4: compare lap 4 and 20 – same lap time, huge difference in avg. power and IF. This also shows that starting position is a key in a fixed gear criterium.

While the data shows that he clocked the same time on lap 4 vs lap 20, the physiological demands of each lap would have been quite different. As we can see in figure 4, in lap 4 Robin’s average wattage was 324 with an intensity factor (IF) of 1.18; on lap 20, he had an average wattage of 276 (4.05 w/kg) and an IF of merely 1.08. In other words, moving through the field cost Robin crucial energy he could have spent later in the race if he’d been better positioned at the start of the criterium. Robin’s case clearly exemplifies the importance of starting in (at least) the first 15 start positions to avoid an unnecessary fight for position before the sprint

With four laps to go, Robin finally reached the top five, establishing a solid foundation for the final laps and the upcoming sprint finish. Unfortunately, there are always factors we can’t control, and with 2 laps to go, a rider next to Robin punctured his front wheel, crashing both riders out of the race. DNF.

Despite his bad luck, Robin’s ability to move through the ranks showed that his fitness was where he needed it to be. So what does his training look like?

How to Train for a Fixed-Gear Crit

A fixed-gear criterium is a short endurance event composed of multiple high-intensity anaerobic efforts, from approximately 6 to 30 seconds. The dominant energy systems used in these durations are mainly the PCr (phosphocreatine) and anaerobic glycolysis, addressed here in Exercise 1:

Warm-Up: 20 mins of endurance spinning with 2-3 cadence-spinups to reach 120 rpm

Set 2: 5×25 secs all-out starting at 30 km/h and finishing at maximum rpm; 8 mins easy spinning in between each sprint

As you probably know, when doing short hard bouts of high-intensity exercise over 6 seconds (as occurring in fixed gear criteriums), we produce lactate in our muscle cells. After such a short, high-intensity effort, you’ll feel the need to slow down as the muscle cell environment becomes too hostile (accumulating too many hydrogen ions, lactate, and a drop of pH-amount) to maintain your pace. That forced slowdown leads to a re-availability of oxygen in the muscle cell, and lactate is converted back to its original product (namely pyruvate) that, in turn, enters the mitochondria for energy production via the citric-acid cycle (Krebs-cycle). To increase the efficiency and capacity of this cycle, see Exercise 2:

Since fixed-gear racers must be able to recover quickly for the next effort (or even just a change of cadence), they need to be able to not only produce an incredibly high-intensity effort in a short time, but also have efficient lactate clearance (recovery) to prepare for their next effort.  This is why endurance training (which increases mitochondrial density in slow-twitch muscle fibers) is also important—despite the short, intense nature of the event.

Another unique quality to fixed-gear racing is that riders essentially never stop pedaling. Instead, they’ll utilize various cadences to modulate their speed, each of which requires different muscle fiber recruitment patterns. Especially this must be trained and approached correctly. See Exercise 3:

Goal: Ride through different cadences on the cadence continuum to have different muscle fiber recruitment patterns.

Warm-Up: 20 mins of endurance on a flat section of road.

Main: 60 minutes of fixed gear riding. This can be done either on a fixed gear bike or road bike. However, when riding on your road bike, choose an appropriated gear ratio and sustain it for the entire main set. Find an undulating section of road where you can ride on. Push it over ascents, turns, etc. and hit higher cadences on the descents. RPE may vary ranging from 3-8

Finally, we suggest that every fixed-gear racer employ a strength training regime all year around. Strength and conditioning develop anaerobic/glycolytic pathways, plus (to a certain extent) increase fast-twitch muscle fibers, which are necessary to produce high force.

Ultimately, an initially very disappointed Robin realized that his performance in Milan was actually not so bad, considering the circumstances, such as his disadvantageous starting position and crashing of other riders. He proved that he was competitive, and merely experiencing some bad luck. Importantly, learning from these undesirable experiences and implementing measures to counteract reoccurrence of mistakes are crucial for every competitive athlete. Robin can be optimistic about his performance in the remainder of the Red Hook series.

This article was written with contributions from Marcel Berger, a USA-Cycling level 1 certified coach from Germany. Currently, he studies Kinesiology with Performance Psychology at New Mexico State University 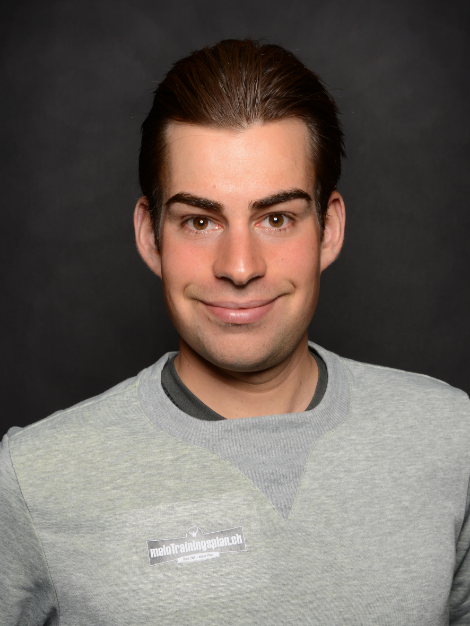