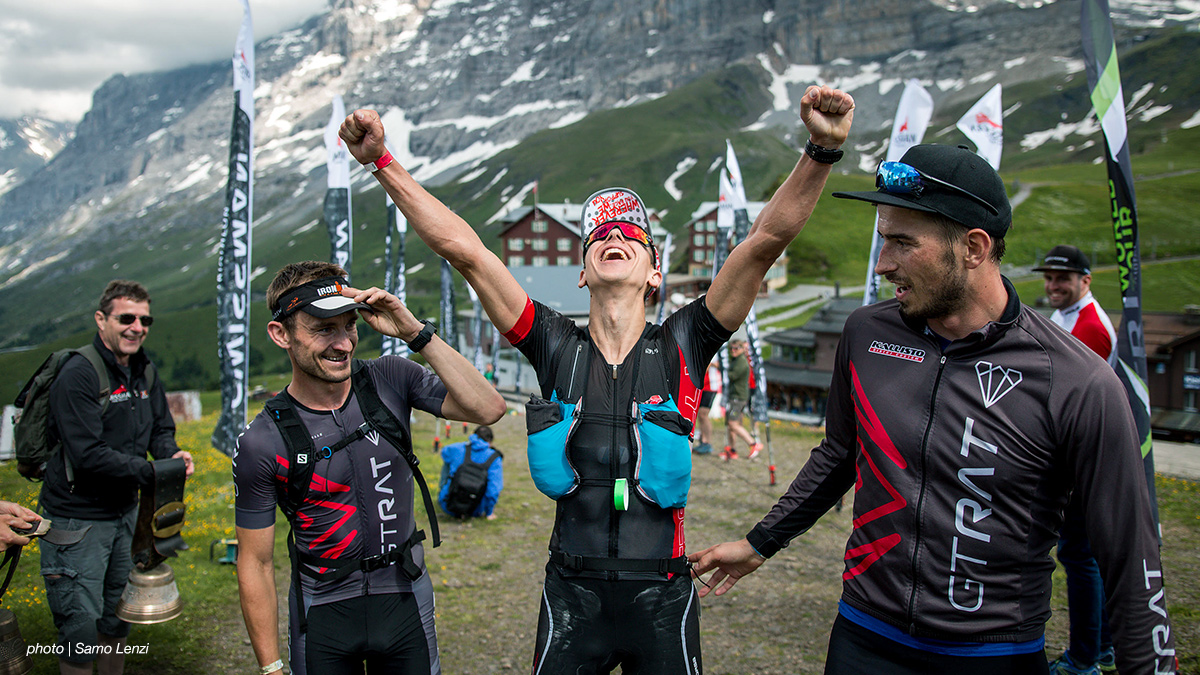 The Swissman Xtreme Triathlon is known for breaking even the most well-trained and seasoned athletes. Here’s how winner Michal Rajca prevailed.

Coming from a running and cycling background, Michal had enough mileage and experience to race well in endurance and multi-sport events. But it was clear to him that he needed to improve his swimming to avoid starting too far behind on the bike. He also needed to maintain consistent training while managing his commitments in a day-to-day job. As a leadup to this race, he attended two camps where he was able to complete between 20-30 hours of training per week. Outside of camp, he was able to train consistently for 12-15 hours weekly, even during the during cold and unpleasant months of the winter.

It is important to be prepared for this kind of event with a reliable support team, as the Swissman course is notorious for breaking even the most well-trained and seasoned athletes. There are many benefits to having a team behind you; they can shoulder some of your day-to-day commitments when you prepare towards the event, and provide you with anything you might need during the race itself. This makes Swissman as challenging for the supporter as it is for the athlete, so Michal made sure to choose people that would vouch for him down the road.

Weather is changeable especially in higher mountain ranges like Furka pass, therefore various strategies have to be considered. First of all, supporting personnel need to be prepared for cold and wet conditions. The athlete might need a warm and waterproof jacket, gloves and shoe covers (which sometimes have to be changed more than once if the weather is extra wet). Worth considering are also leg warmers and cycling cap for colder descents.

It is a point to point race, and it ends more than 200 kilometers from where it starts. That means that all of the clothes, additional food and racing equipment need to be packed in the supporters’ car during the race. It is important to keep in mind supporters needs as well; for example, there are only a few stops where using a toilet is possible.

For such a race, having a selection of differently-flavored snacks is also important. Basic focus is put on simple carbs like bars, gels and isotonic drinks which are sweet in general, but the athlete will also appreciate salty treats like pretzels or nachos.

Michał Rajca’s average pace was 1:31 min per 100 m with an average stroke count between 65-70 strokes per minute. He was in 20th out of the water with more than 7 min lost to the leader. 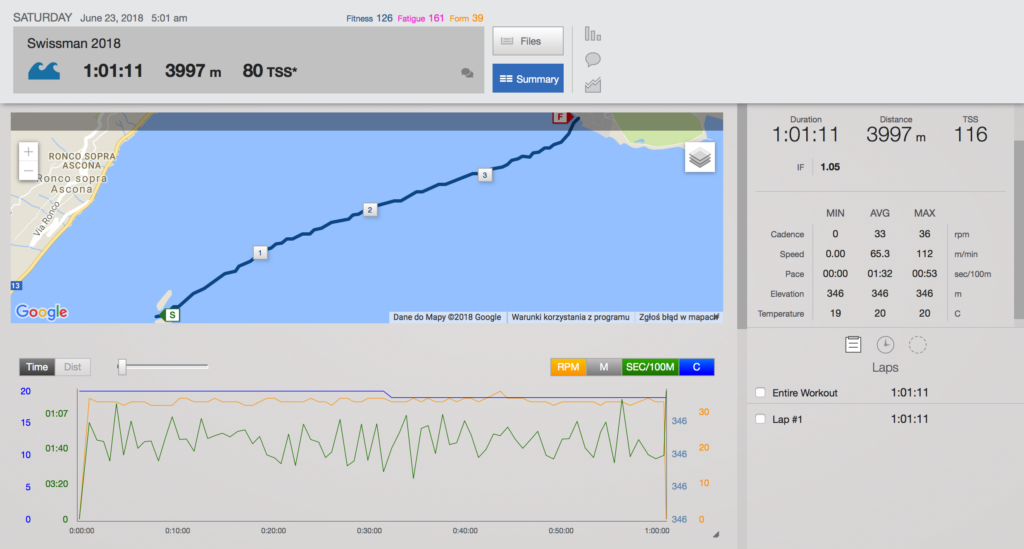 Exiting the water behind the winner of previous Swissman editions gave Michal the idea to push hard on the bike in the initial part of the course, chase down the leader and catch him before the first climb. For this flat part of the bike course, which is around 45 km in length, he averaged 234 W (3.34 W/kg) and reduced his time to the first rider down to 2 minutes. For another 40 km Michal continued to push hard, averaging 241 W (3,44 W/kg).

Michal decided to take the lead before entering Tremola road. It’s an old cobbled climb with grade of 7,3% which can be very selective for race participants. Although a simple trick of riding on the flat concrete slabs on the side of the road is possible, Michal didn’t slow down and increased the gap between him and second rider to a couple of minutes. That was when he began to dominate the race. This year’s weather was perfect, and dry road conditions allowed him to use his descending skills to full potential. The last descent was the longest one on the bike course, and Michal’s maximal recorded speed was 88.1 km/h. Upon the T2 entrance, his average numbers were as follows: 210 W, NP 227 W and 3,00 W/kg, IF 0,69. 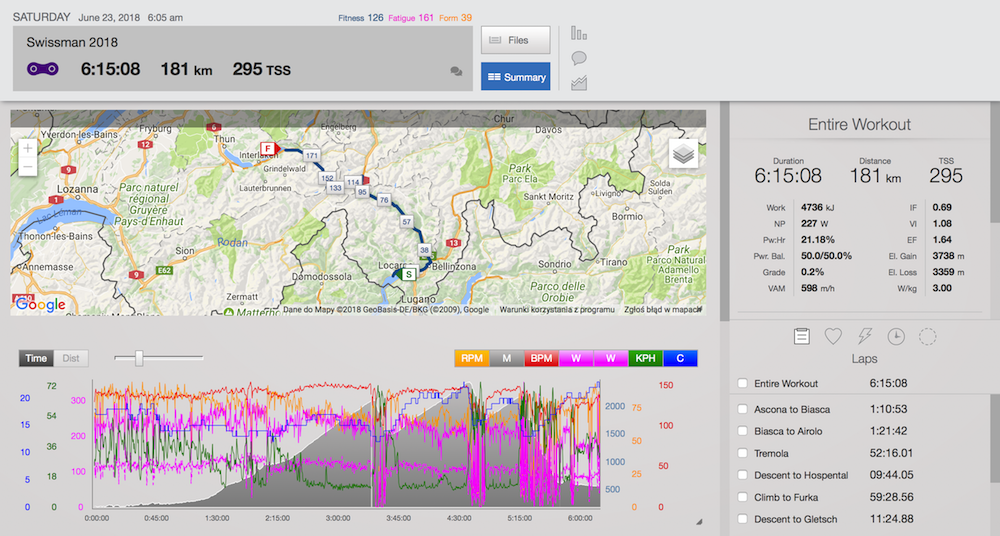 Michal came off the bike around 15 minutes before the rest of the pack and quickly extended his advantage on the run. He led the whole run, averaging 4:51 minutes per kilometer for initial 34 km. He reached the final climb to Kleine Scheidegg where he was able to use his experience from trail running and ultramarathons to take the win. 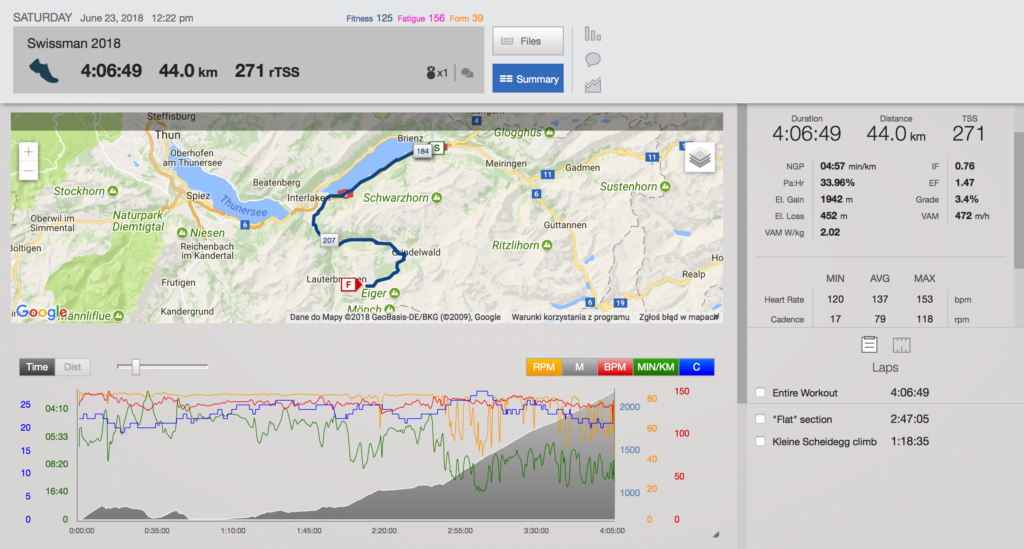 For his effort, Michal posted the fastest bike split and set a new course record of 11 hours and 27 minutes, finishing almost 60 minutes faster than second place.

Congratulations to Michal Rajca for the victory, to all Swissman finishers and to supporters for their help and contribution! 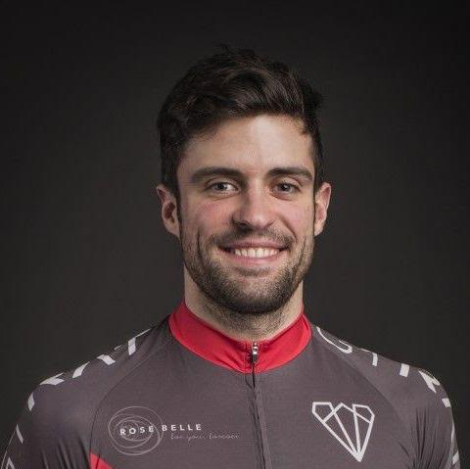 About Jakub Adam
Jakub Adam is certified as British Triathlon Federation Level 3 coach with a Master degree in Physical Education and Sport Science. He has spent his entire life around fitness and multi-sports. He is a passionate all-around athlete, a well-educated triathlon coach and a co-owner of family business Olimpius. Through his individual coaching practice, he helps with understanding proper form and technique, choosing useful training parameters and setting accurate intensity levels, so you can reach your potential and remain injury free.
Visit Jakub Adam's Coach Profile
#DATA-ANALYSIS#PERFORMANCE#TRIATHLON