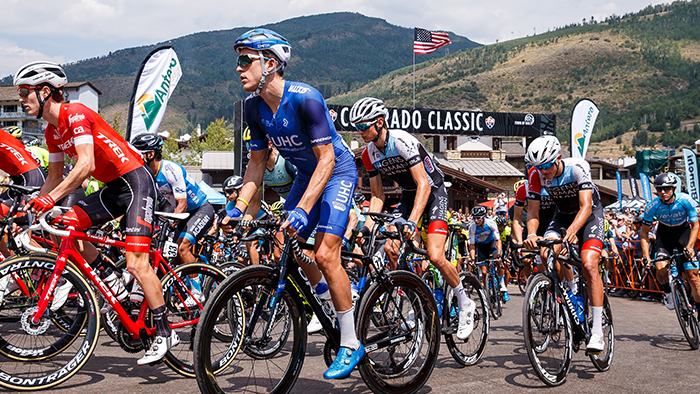 The 20-year-old took fifth in a sprint finish among seasoned riders. See how he positioned himself over the race for the impressive result.

The Colorado Classic was back last weekend with an international field of riders taking on the high altitude peaks of the Rockies over four hard days of racing. Ultimately it was Gavin Mannion (USA) of UnitedHealthcare Pro Cycling who claimed the overall title, with an impressive win in the time trial and consistent racing throughout. In the women’s race, it was Katie Hall (USA) also of UnitedHealthcare Pro Cycling, who took home the GC win, followed by teammate Leah Thomas, who took home the QOM.
Here we’ll look at Christopher Blevins’ file from the hilly stage 1 circuit race.

Stage 1 consisted of a hilly 14.2km circuit, highlighted by a 500m gravel climb, which riders got to experience eight times. The course combined with the altitude would have been challenging for riders unaccustomed to the thin air around Vail, but could have been an advantage for locals.

Christopher Blevins had a fantastic result, sprinting across the line into 5th place. The 20-year-old’s effort was even more impressive given the fact that the entire peloton was trying to catch solo escapee Gage Hecht (USA) of Aevolo. Hecht (also just 20 years old) held off the field for a storybook victory, leaving the peloton (and Blevins) to battle for second.

The stage started right at the foot of the gravel climb, and the first lap was taken at a ‘sedate’ pace of 343w, 5.04w/kg. It took Blevins 2:06 at this power to crest the top. Then came some fast and aggressive riding as riders jockeyed for position. By the time they hit the climb for a second time with a small break just off the front, Christopher hit 545w, 8.1w/g. At this power it took him just 1:22 to reach the top.

EF Education First-Drapac p/b Cannondale then took control of the race until the final 2 laps, where we can see some big spikes in power as riders started attacking for the finish. On the second-to-last time up the 500m hill, Christopher set his peak power for 1min, and his fastest time. He passed over the climb in 1:11min at 618w, 9.08w/kg and hit 1 minute at 627w, 9.22w/kg. On the last lap the pace was similar, at 603w, 8.86w/kg for 1:13.

You can see that the pace was very high over the top of the final climb and riders touched nearly 80kph on the descent. The chase was very hard in the closing 5km as the bunch tried to catch Hecht.

In the final 1.3km you can see two very concerted efforts from Blevins. The first was with just over 1km to go, when he did 15 seconds at 715w, 10.5w/kg to get his position on the slight uphill towards the one-kilometer-to-go banner. With only 50 seconds between this hard effort and his launch into the final sprint, this shows that riders need to be able to make those high repetitive efforts to get a result.

In the final 200 meters, Christopher hit 71kph and a cadence of 117rpm. He also set his peak 10 second power of the day at 872w, 12.8w/kg, and a peak power of 1039w, 14.84w/kg. This ability to position himself well in the last kilometer and still be able to put out a 10 second effort of over 12w/kg is testament to his ability, and hints that his future is bright at the largest races.