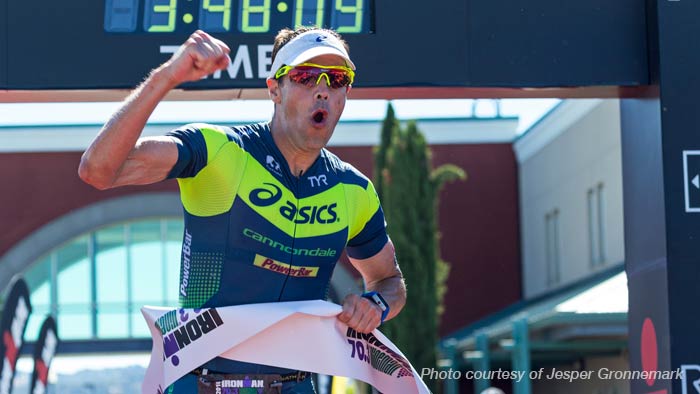 American Andy Potts continues to be one of the most versatile and successful triathletes in the sport. Learn how he and his coach use low mileage run training to prepare for the marathon in Kona and see data from one of his key workouts.

For over 10 years, American Andy Potts has had wins across many distances and formatsand continues to be one of the top triathletes in the sport. Yet, he somehow evades the spotlight and quietly goes about his training and racing. His almost constant smile belies the fact that he is a tough competitor who has succeeded at many different distances.

Not the Traditional Volume

Part of the credit for Potts’ long and successful career can be attributed to his coach, Mike Doane, who began working as his swim coach in 2002 and became is coach for all three disciplines in 2004. Early on, the pair knew that high volume training was not the best way for Potts to go about making his mark. “The reasoning behind it is that he’s a bigger guy and I think smaller, lighter runners can handle volume better than someone who is 6’2” and 170 pounds,” says Doane. “So we decided to less volume but at a faster than race pace effort on tempo runs” Potts agreed saying, “The physical benefits of a traditional long run don’t outweigh the costs. Running has a delayed feedback because the road punches back and the impact takes time to recover from.”

Even when training for his biggest race of the year, the IRONMAN World Championships, Potts does not run what would be considered a traditional long run. Instead, he focuses on race specificity, pace, and mental strength.

For many athletes, a long aerobic run serves as their key run of the week. However, the low miles/high pace approach means that Potts’ key run is his Saturday tempo run.

This run is always done off the bike, as are all of his runs. “I do all of my run workouts off of the bike,” says Potts. “This is a function of utility. It is easier and more time efficient to combine workouts, and because we prepare for the way I race. There’s no reason to run fresh if you’ll never feel that way during a race.” This run evolves through the year, but the specific preparation for Kona begins about eight weeks out. “Last year, we started off at maybe eight miles at what we call pace,” says Doane. “We just kept adding on one to two miles a week. I think our longest run was 14 miles done two weeks out from Kona.” As the run gets longer, the bike portion does shorten up a bit. “It is an aerobic ride that gets me warmed up for the run that also puts some fatigue/strain in my legs,” says Potts. “A lot of times I actually run better when it is a harder ride because my body and legs are good and hot.”

The purpose of this run and how it progresses is two-fold. “The goal is to add volume while going faster each week,” says Doane. “It’s not huge changes, maybe only two or three seconds per mile, but last year we started at 6:05 per mile pace and his last run a year ago he averaged roughly 5:50 per mile pace. So we were able to gradually add mileage and drop his pace.”

Adding volume and intensity is not the norm with endurance training, but Potts and Doane have found that under certain circumstances, it is the best way for Potts to achieve his peak fitness. “Our longer runs are designed to be race specific and get maximal training benefits without sacrificing workouts for the next few days or week,” says Potts.

Though it lacks the distance that many athletes cover for their long run, Potts believes it is great preparation for what he faces on race day. “This run is a great prep for IRONMAN racing as it is at the end of my week, when my legs and body are already fatigued and I have to mentally and physically focus on the goals of the workout,” he comments. “With IRONMAN racing you don’t want to think too far ahead because the task becomes too daunting. It is the same with this run- one mile at a time.” The race specific nature of this run- being off the bike, at race pace, and with a race mentality, is something that helps gives Potts an edge on race day.

After his fourth place in Kona last year, Doane and Potts sat down to figure out what they could do better for 2016. Despite running the sixth fastest marathon in 2:53:45, they both felt that they may have come into shape a little too early. This year, the tempo run is done in the same format, but the pace is different. “This year we are running a little slower, but we’re not adding volume,” explains Doane. “I would say right now he’s close to the same volume as last year. We both have the notion that if I say, ‘Andy, run faster’ he can. But let’s save that for race day.”

Based out of Colorado Springs, (altitude 6,035ft.) Potts went to higher elevations for his final Kona prep. His last tempo run in Colorado Springs was 14 miles, 10 miles at tempo averaging right at a six minute per mile pace, which Doane described as “comfortable”. The file below shows Potts’ heart rate for this key workout, including the bike, run, and his weight session afterwards.

Pace is not the only concern for this run. Monitoring heart rate gives them more insight into how Potts’ body is responding to the training load. “As he gets more tired and the mileage starts piling up and his heart rate starts climbing,” says Doane. During this run, Doane rides beside Potts on a mountain bike offering fuel and encouragement. Being with Potts allows him to constantly monitor the effort. “I will ask him for his heart rate and I tell him ‘Don’t just wave me off, if you can’t tell to me, we are going too hard’. If he can talk to me than we are running at the right pace,” Doane says.

Potts believes that the format of this run gives him the biggest benefit both physically and mentally. “I have found that doing the bulk of my work at about 20 beats below my race effort yields the greatest results,” he says. “This workout allows me to get a bit more specific with race pace work which helps build both physical and mental strength, the latter probably the most important aspect of IRONMAN racing.”

Running longer and faster builds confidence for Potts and encourages him to keep pushing himself. Monitoring each workout and comparing it to the prior workouts allows him to see his improvement over time. “As I start to see faster paces at longer distances, at the same or lower heart rate levels, and equally important, at a lower perceived effort, I get the necessary feedback to keep challenging myself,” he says.

So how does Potts handle the pounding of race day and keep from physically breaking down? Potts has been training consistently for triathlon for over 15 years and that accumulation of volume through smart training. “I think it’s years of training that’s accumulated and he can tap into it when necessary. He is very strong and that’s a big part of his training. He has years of smart training under his belt and we tap into it on race day,” comments Doane.

Potts also has a very consistent weight program that he sticks with through the year. “He has a very strong program that he does three times a week. It varies day to day, but it’s a very sustained, progressive type of program,” says Doane. Even after his tempo run, Potts will hit the weight room for 45 minutes.

Their approach to the long run may be unique, but that is what has allowed Potts to become one of the most versatile and dangerous athletes in the sport. He and his coach have stayed focused on finding what works best for him.

About AJ Johnson
AJ Johnson is the Content Editor and Power Analyst for TrainingPeaks. He is also a USA Triathlon and USA Cycling certified coach. A jack of all trades in endurance sports, he has raced everything from IRONMAN and marathons to road, mountain, and track cycling. A former freelance writer and editor of TRI and ROAD Magazines, when not editing or writing he spends his time with his family or out on long rides to think of more great content for TrainingPeaks readers.
Visit AJ Johnson's Coach Profile
#IRONMAN#TRIATHLON