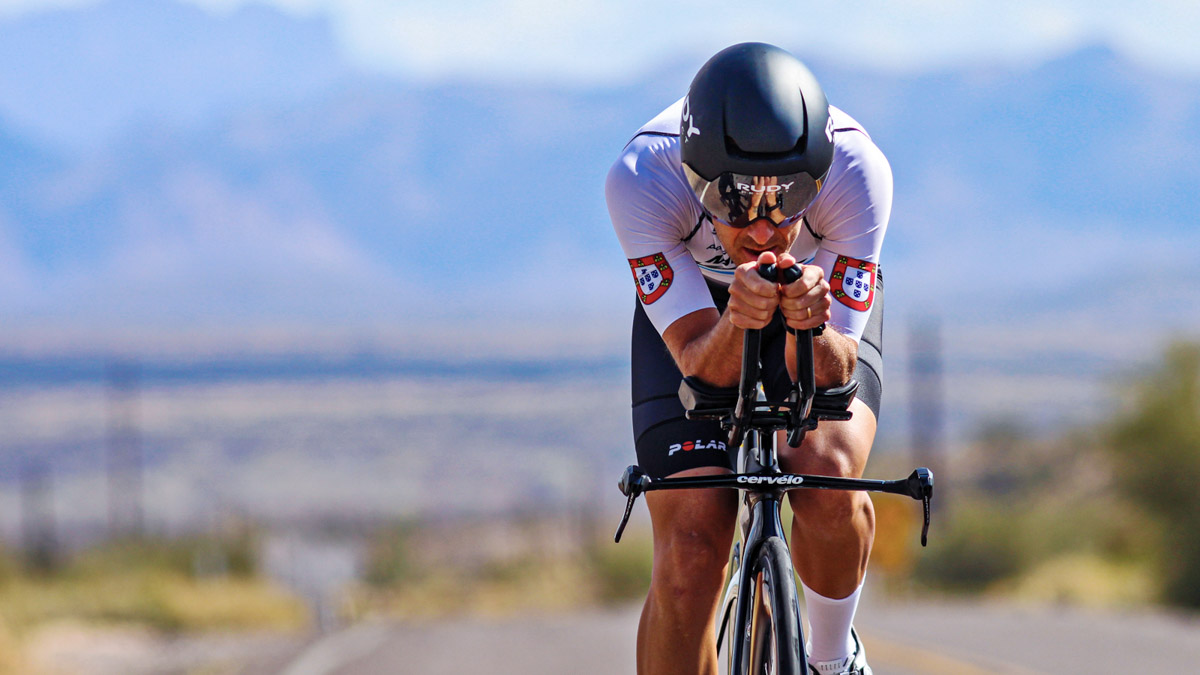 Are You Fit? All About Aerobic Endurance and Decoupling

Decoupling could be a symptom of poor aerobic endurance, and could throw off your training. What is it and how can you test whether it is occuring in your training? Joe Friel walks you through some simple ways to test it.

An important lesson every competitive endurance athlete eventually learns is that the general preparation (“base”) period of the season is the most important time of the year. It’s then that the fundamental abilities of aerobic endurance, force and speed skill are developed. If these abilities are fully formed then the more advanced, race-specific abilities of muscular endurance, anaerobic endurance and power may be built on this solid foundation in the specific-preparation (“build”) period. Excellent general fitness created in the base period is necessary to produce high levels of sport-specific fitness for later in the season. Summer races are won with winter training.

The Importance of Aerobic Endurance

Of the basic abilities, the most critical for endurance athletes is aerobic endurance. Sports such as triathlon, road cycling, mountain biking and distance running are first and foremost dependent on the aerobic system-composed primarily of the heart, lungs, blood and the muscles’ aerobic enzymes.

The way to cause any physiological system to become more fit is to stress it regularly with an appropriate level of intensity for an appropriate duration until it has reached an optimal level of adaptation. Once this is accomplished the system’s new level of function may be maintained for several weeks with stress at the same level of intensity and for a similar duration but with far less frequent training stress. Coaches and athletes once believed that long, slow distance (LSD) was the key to developing the aerobic system. But now the trend is toward employing a moderate intensity at or slightly above one’s aerobic threshold coupled with an appropriate workout duration to produce optimal aerobic endurance. The trick is getting the intensity and the duration of such workouts right.

So how do you find the level of intensity that targets the aerobic threshold (AeT)? This is dependent on your sport. For cycling the AeT is generally to be found in the range of 55% to 75% of Functional Threshold Power (cFTP). Experienced, serious riders typically reap a greater reward by working in the upper half of this power zone when doing AeT training with a power meter. Runner will use pace or speed to do AeT workouts at 75% to 85% of Functional Threshold Pace (rFTP). And just as with cycling, the serious and experienced runner with do AeT workouts in the upper half of this zone-80% to 85% of rFTP.

But how do you know if your aerobic endurance is progressing? And how do you know when you’ve done enough such training to reach an optimal AeT fitness level? The answer to both of these questions may be found by comparing power or speed with heart rate. When training at the AeT intensities described above you may expect to see heart rates approximately in zone 2 according to the heart rate zones as described in my Training Bible books.

What is Decoupling in Training?

While there is little on this in the scientific literature, the limited research available appears to indicate that when aerobic endurance improves there is reduced heart rate drift relative to constant outputs (power and speed). And, of course, the reverse of this is that when heart rate is held steady during extensive endurance training, output may be expected to drift downward. This parallel relationship between input (heart rate) and output (power or speed) is referred to as “coupling.” When they are no longer parallel in a workout as one variable remains steady while the other drifts the relationship is said to have “decoupled.” Excessive decoupling would indicate a lack of aerobic endurance fitness.

How to Test Decoupling

WKO+ software can help you to determine your degree of aerobic endurance conditioning by displaying and measuring your level of decoupling. Once you achieve an excellent level of aerobic fitness the heart rate and power or speed graphs on WKO+ will be parallel or nearly so. Here is how decoupling is determined using WKO+ software.

I have found that aerobically fit endurance athletes experience a decoupling rate of less than 5%. The accompanying figures illustrate different rates of decoupling from less than 2% to more than 11%. As decoupling increases it becomes obvious simply by observing the separation in the charts without even knowing the calculations. 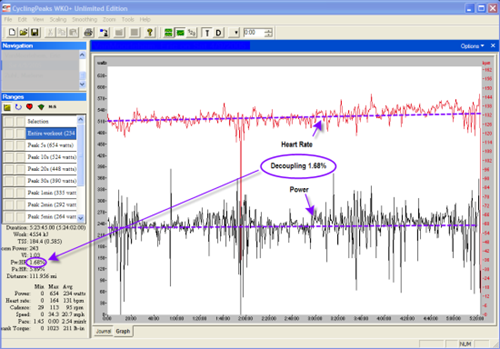 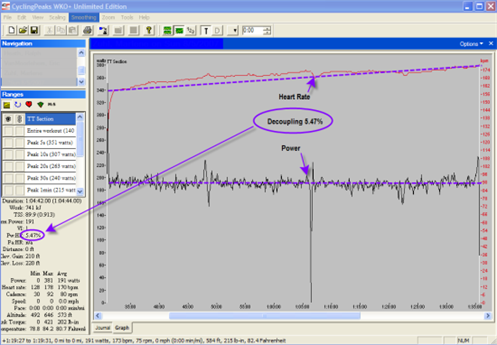 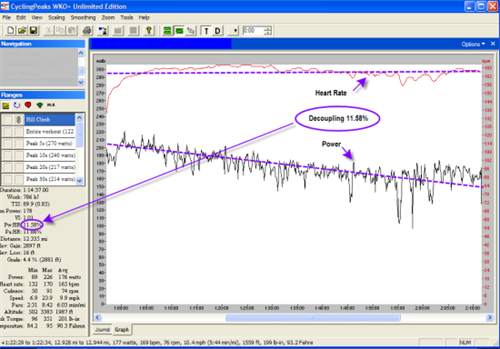 So one of our goals when working on AeT is to keep decoupling to a minimum-less than 5%. When decoupling happens during an AeT workout is just as important as how much decoupling occurs. In other words, it’s possible for coupling to occur for the early portion of an AeT workout followed by an excessive decoupling in the latter portion. That may be acceptable when training for short-course races. Athletes who race in relatively short endurance events such as bicycle criteriums lasting less than an hour, sprint- and Olympic-distance triathlons, and 5k and 10k running races don’t need as much aerobic endurance as longer-course athletes. So how long the AeT workouts are with the decoupling rate staying below the 5% increases as the race duration increases.

How long should optimal decoupling last relative to your race duration? There is no research to back this up, but based on experience, for cycling I use two to four hours of steady AeT exercise as the common range. For running it is one to two hours. The longer the event the longer the coupling necessary for success. If your cycling-related race duration typically falls into the two- to four-hour range simply train for that duration at AeT. For example, if you do the bike portion of a half-iron-distance triathlon or bike road race with a typical time of around 2.5 hours, then do 2.5-hour AeT bike workouts (not including warm-up and cool down). Should your race times be less than two hours (criterium bike racing and sprint- or Olympic-distance triathlon bike portions) then your AeT bike workout is two hours. If your event takes longer than four hours (Ironman-distance bike and long road races) your AeT bike workout will be four hours duration.

AeT workouts of the appropriate duration are done once or twice weekly per sport in the Base period. Start with a shorter duration based on your fitness level and over the course of a few weeks gradually lengthen the AeT portion to the goal duration. When heart rate and pace or speed are coupled (less than 5% decoupling) for the goal duration then aerobic endurance fitness is considered to be optimal and you are ready to move on to the next stage of training-the build period.

How to Do an Aerobic Threshold Coupling Workout

Besides low aerobic endurance, decoupling may also occur due to a failure to take in fluids at a rate which prevents excessive dehydration during a workout. Also associated with decoupling is environmental heat stress which can cause heart rate to rise or power/speed to fall. One would expect the rate of decoupling to decrease as heat adaptation takes place, but I know of no research on this matter. However, I have seen it happen with athletes I coach who live in hot places such as Phoenix, Ariz. Decoupling may also be expected to increase if you go to a high altitude location such as Boulder, Colo. And just as with heat, expect your decoupling rate to improve as you adapt to the higher altitude.

About Joe Friel
Joe Friel is the author of The Triathlete's Training Bible, Your Best Triathlon and other books on training. For more information visit his website at www.joefrielsblog.com. You can also view and purchase Joe's training plans on TrainingPeaks.
Visit Joe Friel's Coach Profile