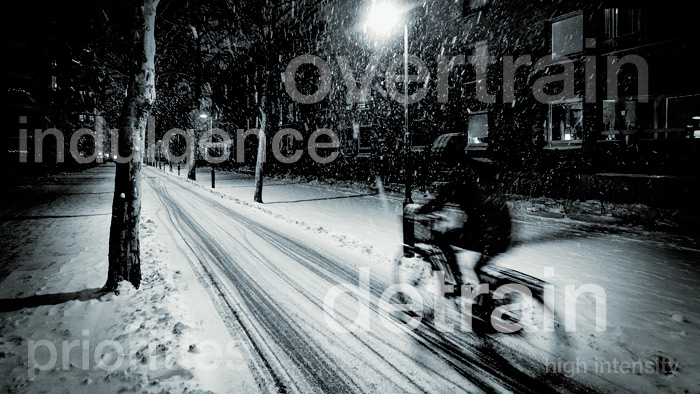 5 Things Triathletes Should Not Do in the Off-Season

The off season is a balance between recharging your mind and body and losing too much fitness. Avoiding these five mistakes will help you strike that balance, have a strong off season, and go into the 2016 season ready to reach your goals.

When I started training for IRONMAN triathlons in the late 90’s in Virginia, I was jealous of all the triathletes who lived in warmer locales like Florida and Southern California. Why? Because those triathletes could train and race year round without the inconvenience of snow and freezing temperatures.

The winter weather forced me to take breaks in my triathlon training and racing. I remember struggling with the feelings of frustration that I was losing fitness and falling behind my warm-weather friends. In hindsight, I’m glad the forced breaks were there.

Rather than write about what you should do this winter (like take a short break), here are five things triathletes should not do during the winter. I’ll caveat all of these by saying that it’s extremely difficult to set hard and fast rules that apply universally to all triathletes because we are all different. So please use the “Not to Do’s” as suggestions or guidelines rather than hard and fast rules.

A few years ago, one of my triathlete friends had signed up for a triathlon club challenge, which ran for three months over the winter, starting in February, with each month having either a swim, bike, or run focus. The winning clubs and individuals were the ones whose members logged the most training miles. My friend finished near the top of the contest nationally and, although he performed admirably well in his early season races in April and May, his training and racing fell apart during the summer. He had trained too much over the winter and peaked too early.

Although it can be tempting to do massive volume and excessive or frequent high intensity sessions over the winter and shine like a star in February, there can be a cost to performance later in the season. Build up your volume and intensity gradually and meaningfully in the new year so that you peak at your key races and not before them.

On the opposite extreme, a triathlete can choose to hibernate like a bear for the winter and do nothing at all for a few months.

Taking an extended period of time off will cause detraining, which can be defined as a partial or complete loss of training adaptations over time due to an insufficient training stimulus. Aerobic endurance adaptations are sensitive to detraining; changes in performance occur within a few weeks.

Still, rest is very important to give your body and, just as importantly, your mind a much needed break from a long competitive season. The key then is to find the happy median between doing too much and too little.

Use some of the time between competitive seasons to take a break from a strict and rigid schedule of swim, bike, and run workouts to do something different but active and fun. Try skate skiing if you have access to snow, mountain biking, or focus on strength training or yoga.

Yes, you will lose some swim, bike, and run specific-fitness, but the time away from a strict triathlon training focus will help you recover both mentally and physically before ramping up your training in the spring.

If you have cable TV, you’ve seen the infomercials for P90X and other programs like it. The “before and after” testimonials are an impressive and powerful sales pitch.

The dangers with doing any type of high intensity strength and power program are both the potential for injury by performing exercises fatigued or with improper form and for overtraining, especially if you are layering on additional swim, bike, and run workouts. A strength program should be appropriate to your endurance sport.

Still, doing these programs may be better than doing nothing at all. Consider modifying or removing workouts in the program, especially more advanced sessions like plyometrics, which require substantial time between sessions (up to 48 to 72 hours) for full muscle recovery and pose greater risk for injury. If you have an injury, appropriate exercises to rehabilitate the injury should be the first priority.

When I spoke to another friend recently, he said he needed to start triathlon training again because he had gained eight pounds in two weeks after finishing his last triathlon of the season.

He’s not a large person so I asked, “Wow! How did you do that?” “Pizza,” he said. “Seriously. I order pizza every night.”

Gaining a little weight over the winter is not necessarily a bad thing. You may experience small weight gain after a few days of no workouts as your body is suddenly able to store more carbohydrates (along with water) as glycogen instead of being depleted from doing multiple workouts each day. This weight gain is normal and what many athletes will experience during taper weeks.

With holiday parties, dinners and vacations, it’s challenging to eat well. Be mindful though that any weight gain now may not come off later in the year. Often, awareness is the first step in identifying that you’re eating too much or the wrong types of foods that are nutritionally poor and calorically dense. Trying keeping a food log for three days to see what you’re actually eating.

Our friends asked my wife and I if we wanted to join them for a marathon in January. Sounds like fun! Or not- it really depends. If I’m healthy now, feel ready to take on the running volume and intensity of training for a marathon over the next few months and am motivated to do so, then sure, why not? However, if the race doesn’t fit my own goals, or I’m working through a recurring calf injury then racing a marathon because someone else is doing it is not a good choice.

As I wrote above, think in terms of guidelines rather than set rules. Finding the right balance for your mind and body is the key to a successful off-season.

David Glover jumped into his first triathlon in 1995 to prove he could beat his cancer. After achieving his dreams of a sub 9 hour IRONMAN® and winning Vineman Full twice, David's passion now is helping other endurance athletes achieve their dreams through online education and training programs. David currently resides in the triathlon mecca of Boulder, Colorado. Learn more at www.enduranceworks.net or contact David at'david@enduranceworks.net