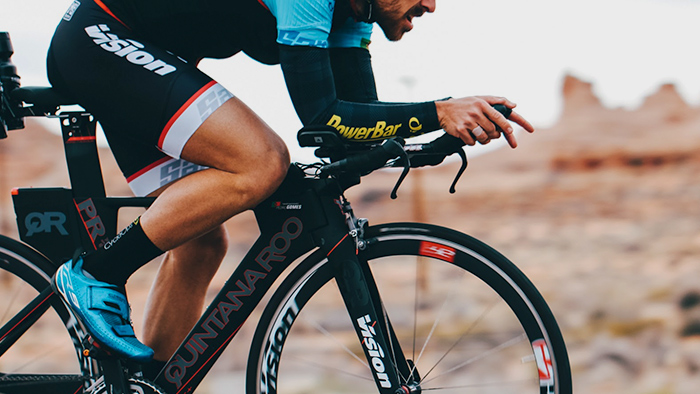 From power bursts to modifying your cadence, here are five simple ways you can adjust your training to improve your bike power.

1. Do some power bursts.

Power bursts are a great way to increase your leg strength and muscular endurance, which is the ability to pedal a relatively large gear at a moderate cadence (i.e., force generation). It’s a versatile workout that you can complete on any terrain. Begin by warming up thoroughly. This should include easy spinning as well as a few pulls in bigger gears to prepare your legs. The warm-up is critical because of the stress placed on the knees due to the use of relatively large gears.

Begin each power burst by spinning at a very low cadence (i.e., coasting) and speed. Shift to your big gear (e.g., 50 x 11) and while seated, pedal as hard as you can until you reach 80 rpm. This should take about 15 seconds. Shift to a small gear and spin easy for three minutes at 90 rpm. Repeat 10 times and build up to 15 power bursts per session.

2. Do some cadence intervals.

Another way to increase power is to elevate your pedal cadence. You can do this with a cadence intervals session, which is a moderate intensity workout that will improve your neuromuscular coordination (i.e., improved coordination and cooperation between the muscles that enhance your ability to pedal at a very high rate).

To do this workout, use a relatively small gear that allows you to train at 85-percent to 98-percent of your lactate threshold heart rate (76 percent to 90 percent of your functional threshold power) while pedaling a cadence of 100 to 110 rpm. Start with three x eight minutes and increase the length of the hard efforts until you can complete three x 15 minutes with five minutes of recovery.

Long rides improve your aerobic and muscular endurance. More than that, they stress your cardiovascular and muscular systems in a way that facilitates the physiological adaptation process. Long rides are the most effective way to increase training volume and stress; however, keep two points in mind. First, long is a relative term. If your longest ride to date is two hours, completing a three-hour ride will have a significant impact. Likewise, if you routinely complete four-hour rides, keep working until you can finish a five to six-hour jaunt. Second, you don’t have to complete a long ride every week. A long day in the saddle every three to four weeks will have a significant impact on your power output and overall fitness.

4. Modify your cadence and gearing patterns.

Physiological adaptation occurs when the body encounters stresses it has not had to deal with previously. If you do the same workouts again and again, your body gets used to them no matter how hard they are, which can lead to a performance plateau. One way to build diversity into your regimen is to alter your cadence and gearing patterns. For example, if you typically perform lactate threshold intervals in a relatively small gear at 95 to 100 rpm, you can better facilitate the adaptation process by doing some of those intervals in a bigger gear at 80 to 85 rpm. Likewise, if the cadence for your long ride is typically 90 to 95 rpm, spend some time pedaling a bigger gear at 80 to 85 rpm.

5. Push through a personal barrier.

In other words, do something you have never done before. For example, if your current long ride is three hours, build up to four hours. If you normally do one long ride during a mesocycle (e.g., every four weeks), try two long rides. If you typically climb your favorite hill three times, climb it four times. If your personal best up that hill is 12 minutes, set a seasonal goal to break 12 minutes. If your longest lactate threshold interval is 15 minutes, increase it to 20 minutes. If you currently ride four days a week, try riding five days a week. If you typically perform two-day high-intensity training blocks, try a three-day block.

If you are a multisport athlete who normally performs one brick workout in a microcycle (e.g., every  week), perform two bricks in your next microcycle. Anything you do that you have never done before will help facilitate the physiological adaptation process. But be careful, this can be a recipe for overtraining if you do not allow for sufficient recovery.

About Tyrone Holmes
Tyrone A. Holmes, Ed.D., CPT, is a certified personal trainer through the American Council on Exercise, a Level 1 cycling coach through USA Cycling and a TrainingPeaks Level 2 Certified Coach. He provides Cycle-Max Coaching for cyclists and multisport athletes who want to improve their performance on the bike and Run-Max Coaching for individuals who want to run longer and faster. Dr. Holmes has published several books including "Training and Coaching the Competitive Cyclist," "Developing Training Plans for Cyclists and Triathletes" and "The Business of Training and Coaching." Visit his website at www.holmesfitness.com and review his training plans at www.holmesfitness.com/training-plans.
Visit Tyrone Holmes's Coach Profile
#CYCLING