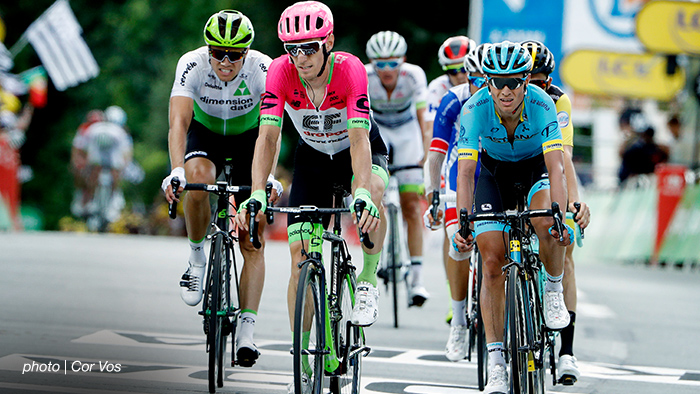 Stage 6 was another day on the hard roads of Western France, culminating in two ascents of the Mur de Bretagne.

Stage 6 was another day on the hard roads of Western France, culminating in two ascents of the Mur de Bretagne. With stage 5 being so difficult, the fatigue and pressure from the past days of hard racing started to show in today’s results.

Ultimately it was Ireland’s Dan Martin who proved the strongest with a scathing attack in the last kilometer. We have the pleasure to look at two specialist climbers in today’s data review: Pierre Rolland (Fra) EF Education First-Drapac p/b Cannondale and Mikel Nieve (Spa) Mitchelton-SCOTT GreenEdge. 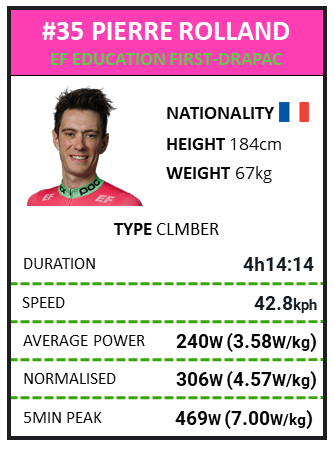 The start of Stage 6 was more sedate than the previous day, a pace which I would assume was welcomed by many of the riders. The break went within the first few hundred meters, and the bunch showed early control, allowing a gap to form as riders prepared for a tough finish. In the first hour of the race Pierre had an average power of 183w, 2.73w/kg, with a normalized power of 234w, 3.59w/kg.

At the first two categorized climbs at the 40km and 68km, the pace began to increase. Both climbs were taken at around 5w/kg, and lasted 4-5min. But Pierre’s real focus was on the final climbs, to both support team leader Rigoberto Uran and maintain his own high overall position.

We often hear that the battle for position prior to a significant climb can often be harder than the climb itself, and the run into the finishing circuit of this stage was no exception, with some very aggressive racing.

This intensive 7 minute effort at over 5w/kg was followed immediately by the 2km Mur. To give you an idea of that effort, the pace set was enough to dislodge may riders from the peloton, with another lap still to come.

Pierre’s peak 2min effort on this climb was 442w, 6.6w/kg. At this point in the race he was sitting well to the fore of the bunch, comfortably waiting for the final big push to the line on the second ascent.

The final ascent to the line was explosive, starting with a big 1 minute effort to kick things off on the lower slopes. We can break the final climb down into 3 clear segments to help see the power distribution over the final 2km of racing. This is a great example of what it takes to be at the front on an explosive TDF climb. This would have felt like a MASSIVE Vo2 Max workout at the end of 4hr of racing

Pierre only lost 31sec to the eventual winner of the day. To be able to maintain a position with the leading group he would have needed to maintain his top effort of 8-9w/kg for another 1min. Still, this was a very impressive effort on what the end of two hard days in Brittany. 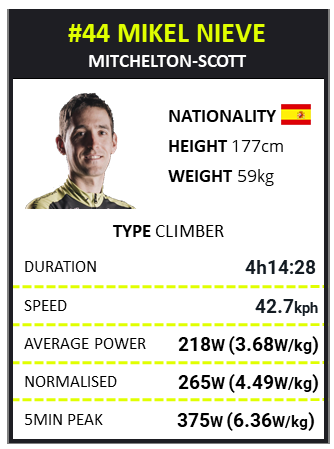 Mikel Nieve will be a critical part of his team’s master plan to keep Adam Yates in contention for overall GC honors. With his many years of experience, I am sure we will see him play a crucial role as we hit the big mountains.

You can see one example of this experience at 100k to go, when Quickstep pushed the pace through a crosswind attempting to break apart the peloton before the climb. With an average speed of 63kph through this section, riders caught out would have needed to make a big effort to regain contact—but Mikel’s average power was just around 285w, 4.83w/kg. I would expect this was at least 1-1.5w/kg lower than anyone who was fighting for wheel.

Later, we can see that Mikel was solid for the full duration of the final 19km, not just on the climb. Here he averaged 290w, 4.92w/kg with a normalized power of 339w, 5.57w/kg for the 27min it took them to complete the last part of the stage.

Mikel spent a large part of the final part of the race on the shoulders of his team leader Adam Yates, making sure all was set for a good finish for the young Englishman.

Ultimately Mikel was able to not only help his team leader, but he also pulled out a good result on a climb that probably does not suit his normal strengths. Here is a breakdown of both his ascents up the climb of the Mur de Bretagne.

Looking at the file, we can see that Mikel’s power started to drop at a quicker rate than that of Pierre. Mikel went down to 5.7w/kg for the final 1km of the climb, whereas Pierre was able to maintain his around 6-7w/kg for the same duration. That difference in power translated to the 15 seconds which separated these two impressive riders at the line.