Stage 5 saw some of the Tour’s first climbing. See how Mathew Hayman and Damien Howson fared as the race rolled through Brittany.

Stage 5 of this year’s Tour de France was the first foray into the hilly terrain of the Brittany countryside. It was never going to be an easy day, with categorized category 3 and 4 climbs, and a massive number of smaller bergs to tackle throughout the route. With many of the climbs lasting around 1.5-3km in length and with a solid uphill finish, this route might remind you of a mini Amstel Gold circuit.

We have the privilege of looking at an in-depth analysis of two Mitchelton-Scott GreenEdge riders, Damien Howson and Mathew Hayman. Both riders played a part of their team’s plan to keep team leader Adam Yates out of trouble. 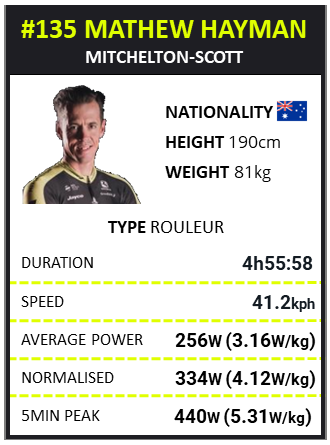 We’ll start with a detailed look at the efforts of Mathew Hayman on the first half of stage 5. He spent the start of the stage chaperoning his team leaders around the peloton and using his experience to maintain position at the head of affairs.

The opening 5km of today’s stage was the hardest to date, as the bunch was not willing to let the early break go too far up the road. In the opening 2 ½km the bunch averaged 53.5kph, and Mathew had to average 512w, 6.18w/kg just to keep on the wheels. This initial surge of power at the very start of the stage would have been a big wake up call to the legs, foreshadowing some intense riding later in the stage.

After this fast start, the peloton backed off to a steadier tempo, settling for controlling the time to the break, and some calm was restored to the bunch.

Around the 100km mark the pace kicked back up as the BMC-led peloton began to reduce the deficit to the break. This also signaled the start of the early climbs, most around 4min in length and taken at a consistent tempo effort of 5w/kg by Matthew. Here is a breakdown on the early climbs that the riders faced on the approach to the final

Keep in mind the efforts between the hills were not easy either, with some fast racing to keep to the fore and avoid any potential crashes. As the efforts start to ramp up, the stress starts to become apparent. Overall it was a hard day for Matthew, with a final TSS sore of 386 for the stage. With a normalized power of 334w, 4.12w/kg for nearly 5hrs, these punchy climbs had a real impact on the body.

Matthew kept close contact to the head of the bunch throughout most of the stage until the climb of Cote De La Chapelle De La Lorette with around 12km to go. At this point his job was done and it was up to others keep Adam Yates out of trouble in the technical run into the finish. 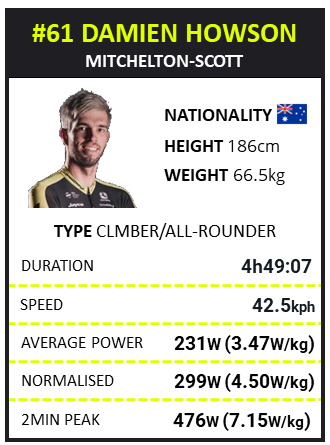 The final part of the stage was extremely fast with the climbs coming in quicker succession. The pace reached full pitch as the last of the break were caught in the final 20km to the finish. Damien was part of the leading group right up until the final kilometer, when his job was done successfully. (At that point Yates was positioned well with the front bunch).

The pace continued through the longer climbs with an effort still around 5.5w/kg average for Damien on the cat 3 bergs. What is noticeable is that his peak 1-2min efforts really increased in the final 40km of the stage.

If we look at these intensive efforts, we can see that the short steep ramps on both the categorized and uncategorized climbs were very hard. On the climb to the bonus sprint with around 12km to go, Damien kicked out an effort lasting 1:38min at 478w, 7.18w/kg. And this was after a similar effort on a short climb before, where he set his peak 1 minute power for the day at 520w, 7.81w/kg.

Between the climbs, we can see around 8-10 spikes of power between 20-50sec, going up to an average of around 350w (5.26w/kg) and a max of around 800w (12w/kg). With these ‘spikes’ littering his final push to hold position on the flat prior the climbs, and then a combined effort of 4min+ sustained powers around 5.5-6w/kg, this would have been a very taxing section.

All of this was done prior to the final uphill kick to the line and after nearly 5hrs of racing. These final punches (up to 10w.kg+) in the run to the line would have really taken a toll on anyone who was already suffering. This is clear from the final results, as we see a scatter of riders finishing anywhere from 2-17min down on the leader. No doubt there will be some serious fatigue as the riders hit more sustained climbs in the upcoming stages.