A year-round strength training program is a key component to becoming a well-rounded, injury-free and successful triathlete. 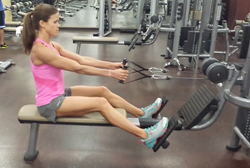 There are many schools of thought on how to organize strength training programs. In the coming series I’ll organize the training into three phases:

For a multitude of reasons I will be omitting a true power/plyometric phase, though I will integrate some elements of it in the next two series.

Today we’ll cover the first phase of strength training, called the Stabilization Phase, or off-season phase. This phase lasts between 3-5 weeks depending on the organization of the athlete’s season and level of conditioning going into this phase. The athlete should start this phase within 10 days of their last race.

One quick caveat: It’s impossible to standardize strength training for any group of individuals because there are simply too many acute variables to take into consideration.  Each of us have our own unique set of circumstances which are as varied as the human landscape. However, there are general movement patterns and strategies we can employ which will move us into a safe and effective, evidence-based strength training program for the off-season.

Goals of the Stabilization Phase

The objectives in this off-season or transitional phase are to:

It’s important to remember that endurance training is repetitive and mechanical by nature.  Throughout the course of an athlete’s season there’s an accumulation of thousands upon thousands of individual repetitions in a limited range of motion occurring in one plane. A great example of this is cycling, where the athlete performs thousands of pedal strokes in a fixed plane (hips in the saddle and feet clipped into the pedals with force directed in a very linear way). Since tissue remodels along lines of stress, the affected joints and tissues become very strong in a limited segment of the continuum, thereby destabilizing the joints which are designed to move through multiple planes and ranges of motion. All of this increases the risk of injury for the athlete as they are unable to effectively reduce, stabilize, and produce forces dynamically in all planes and ranges of motion as the joints are designed to do.

In the Stabilization Phase of strength training, we aim to slow the tempo and focus the action on reducing forces (deceleration of load or movement), and stabilizing with neuromuscular control. Neuromuscular or motor control refers to the effective interplay between the nervous system and the muscular system to produce postural equilibrium under load or in a state of transition.

Typically there is less use of external loads than there will be during the true Strength Phase (phase 2). Many of the patterns rely on body weight (intrinsic load) or light loads with bands (elastomers) and dumbbells, or medicine balls. It takes time to strengthen the tissues and joints in the body. Muscle fiber responds to loads relatively quickly whereas the soft tissues like tendons and ligaments take more time, because they are avascular (have reduced or no blood flow) and elastic. This means they require additional time to hydrate and regain their elastic and tensile properties.

The Rules of the Stabilization Phase

Here are some critical items to keep in mind as you enter the Stabilization Phase of strength-training.

Here’s a sample workout for an off-season, stabilization-oriented strength protocol for endurance athletes. I’ve also included a playlist of instructional videos for each exercise.

Take :30-:45 rest between each exercise (less is fine). Move through the exercises as a circuit of four. In other words, perform exercise #1, #2, #3, #4 and then back to #1 until all sets of the first circuit of four have been completed. Then move onto the second group (#5-8).

An intelligently designed strength training program is one of the best ways to become stronger and avoid predictable patterns of injury.  Achieving optimal performance on race day is the cumulative effect of all the “other” things we do besides the aerobic workouts.  It’s about making time to get to the gym or clear a space at home to do the strength work which will make you a better athlete downstream.

About Shane Niemeyer
Shane Niemeyer (CSCS, PES, CPT) is a coach, motivational speaker, author and elite age group athlete racing Ironman and 70.3 distance. As a strength and conditioning expert and endurance coach, Shane has helped individuals of all abilities to achieve their goals. For inquiries or questions on the above, feel free to contact Shane through his website at'www.trueambitions.com'or on Twitter'@shaneniemeyer.
#STRENGTH#TRIATHLON