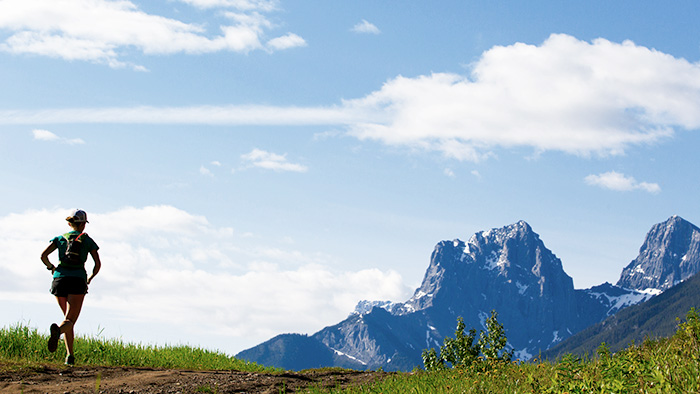 When to Arrive at Elevation When Racing at Altitude

Despite a dearth of research on the subject, 12-time Leadville 100 MTB finisher Gale Bernhardt outlines her own trial-and-error recommendations for optimal acclimation while racing at altitude.

The thought of racing at altitude often produces an avoidance response from endurance athletes. It’s easy to understand; at high altitude oxygen is at a premium and some people become physically ill, suffering from acute mountain sickness (AMS).

Typical AMS symptoms include headaches, nausea, sleep disturbances and an overall lousy feeling. And while not everyone experiences these symptoms, there is no getting around the fact that the density of oxygen in the air decreases in direct proportion to an increase in altitude. In other words, when you take a normal breath of air at altitude, you will have less oxygen in your lungs than you would if you were to take the same breath at sea level.

There are many studies that support the concept of living high and training low to improve athletic performance. Typically, athletes live and sleep at moderate altitudes to acclimatize their bodies. One of the main results from acclimatization is the body’s natural response to build more red blood cells. This increase is the body’s way of compensating for the lower oxygen levels in each breath of air.

The downside to living at altitude is that it is nearly impossible to train at the same intensity (relative to duration) as when training at sea level. Therefore, athletes train low to maintain their power and speed. This is commonly done by living in the mountains and commuting to lower altitudes for key training sessions.

A very low percentage of the total athletic population has the resources to live high and train low, or even to live high for several weeks.

The Majority of Research

When it comes to racing at altitude, many resources recommend that athletes with a limited budget and little time arrive as close to an event’s start time as possible—usually the same day. Other sources recommend arriving between 18 and 47 hours prior to the event, commenting that there is no difference in the hours within that timeframe. In my first book1 and in articles I wrote between 1999 and 2006, the research suggested arriving anywhere between one and three days prior to an event.

After an experience I had on a week-long bike tour in 2007, I decided to dig for research related to endurance racing at altitude. My goal was to improve my Leadville 100 Mountain Bike Race time (you can read an article on how to train for this race specifically here).

I found one study2 that revealed aerobic performance decreased by 11.3 percent within one to three hours of arrival at altitude. After roughly 45 hours of acclimatization, half of that performance, or 5.7 percent, was recovered.

The prospect of gaining 5.7 percent performance in an event that takes me nearly 12 hours to complete looked very appealing. At the time (2007) that gain worked out to be about 40 minutes for me. All I had to do is arrive at altitude a little earlier than normal for the race and I’d gain free speed. Sweet!

However, I limited my excitement. The research paper had a sample size of only five men. Additionally, the aerobic performance they examined was 50 minutes long. This is very short compared to a 12-hour event.

Looking at the impressive results of the research, I decided to do a test of my own in 2007. I arrived in Leadville, Colorado, (3,094 meters/10,200 feet) about 66 hours before race start. The previous two years I arrived around 20 hours prior to race start.

My performance test would be between the city of Leadville and up to 3,840 meters/12,600 feet. At the time, I rationalized that staying in the city of Leadville would be better than going to a lower city like Frisco, Copper Mountain or Vail. I was aiming to make the acclimatization days similar to the study, where performance was tested at altitudes higher than the acclimatization nights.

The chart below is a comparison between my 2006 and 2007 races, with heart rate and other performance data I collected. All of the zone times shown are in minutes. At the time I didn’t measure oxygen saturation.

I had a solid race in 2007, dropping 48 minutes off my 2006 race time. In 2007, notice I spent more time at higher heart-rate zones and was able to drive a higher average heart rate and average speed for the entire race.

Examining all of the variables affecting the outcome of an experiment like this is very complicated. Although my time improvement is very close to the 40 minutes I estimated in my pre-race scheming, I do not believe that spending extra hours at altitude accounted for my entire race success. Training and other factors did have an influence.

Although the research paper I mentioned earlier showed a positive result for short-term acclimatization and aerobic performance, it’s only one research paper with a small sample size. I have kept my eye out for more research on altitude and endurance events, and so far there has been none.

I’ve race the Leadville 100 for 12 consecutive years, beginning in 2005. My fastest race was in 2013. I am only a study of one, but in the years between 2010 and 2017, I have made Frisco, Colo., my base camp. The elevation at Frisco is roughly 9,000 feet. I arrive in Frisco five to seven days before the race. Best I can tell, by collecting oxygen saturation numbers, heart rate and power data, staying at this elevation has not harmed my high altitude performance on race day. Perhaps it has helped, but admittedly many things affect training each year.

I believe the extra time at altitude, Frisco or Leadville, helped me from several perspectives. First, I felt more relaxed going into the race because I had extra time to get organized. Second, I simply felt better on race day than I did after only 20 hours of exposure. Finally, my resting heart rate and heart-rate performances on race day show a positive response.

If you have an important race at altitude, a few extra days at that elevation might give you a performance edge. Ultimately, you will need to see how your body responds. But for those who can afford it, the extra costs associated with time away from work and an extra night or two in a hotel might be worth it. Aim for at least 45 hours prior to race start, and a few days more than that might be better for you.