TrainingPeaks software engineer Giancarlo Bianchi worked hard to refine his gear and position for his A-race: the Colorado State Time Trial. Here’s how he made it to the podium.

Time trialing is an art; it requires a fine balance of knowing when to put down power and when not to in order to achieve the fastest time/speed possible. For example, a steady power output will rarely give you the fastest time for a given course. Time trialing also kinda sucks because when done correctly, it hurts so damn much. Or as one local rider once told me, “It’s a shit thing to be good at”.

I discovered that I might be good at time trialling after posting a decent time at the 2015 Tour of the Gila—which I rode without a Time Trial bike, and managed to beat some of the cat 1/2 guys in full aero gear. So I bought myself a Cannondale Slice RS and went to local bike fit specialist, Ivan O’Gorman. I told him, “Make me aero, I will worry about everything else.” He set me up with an 18 degree back angle and sent me on my way.

The following season my TT results improved drastically. I went from top 20s to consistently top 10s. After a few more position tweaks, a few more bike upgrades and a lot more questions for Ryan Cooper (founder of BestBikeSplit) I started placing no less than 7th in any TT I entered. Then, just a year after the Tour of the Gila time trial got my wheels turning, I returned and finished second in the cat 1/2 ITT.

I will be eligible (aka, viejo enough), to race masters nationals in 2019. I looked at the results over the years and, again, by using BestBikeSplit, I was able to determine that I have a really good shot at getting on the podium. So I made the Colorado State Time Trial my A race this year, and committed to getting every detail right in the 28 weeks leading up to the race. Here are some things you might want to think about if you have similar goals:

First, I worked with Ivan O’Gorman and Leomo Labs (from the video above) to really refine my position. Using their real-time motion analysis sensors, I was able to determine that I experience very little positioning degradation while riding hard, so adopting a more aggressive TT position would not have any negative effects on my performance, and would instead help me go faster.

I then worked with Andrew Buckrell of STAC ZERO. Using their virtual wind tunnel and computational fluid dynamics analysis, he was able to determine that a few more tweaks to my position and a different helmet choice would see an approximately 3% reduction in my drag coefficient. (See how to find your own drag coefficient using BBS here)

With regards to gear/equipment, that meant upgrading to Di2, getting an SRM and Ceramicspeed EVERYTHING. A Vision disc and deep section front wheel are a must, which were paired with Vittoria corsa speed tubulars, currently the fastest tested tire in the world, pumped at the correct psi of course! (yes, there’s a formula for this). 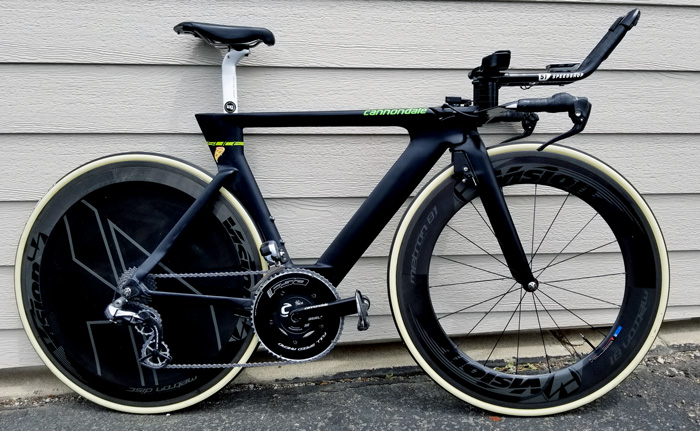 I also changed my TT extensions to something longer and higher, as per the independent suggestions from both Ivan and Andrew. The 51 Speedshop’s ski bend was just the ticket.

For training, I bounced ideas off of Tim Cusick on what I should focus on. I also depended heavily on WKO4 and Trainingpeaks.com to help analyze and plan my training leading up to the event. Trainingpeak’s ATP estimated me to be 97 CTL/18 TSB and I came into the event at 93 CTL/18 TSB. So very close!

I also refined my training off the bike. I would stretch after almost every ride, knowing that good flexibility would be a key to TT-ing success. I worked on my core strength because an aggressive TT position is only as good for as long as you can hold it steady—once you start to rock and roll is when you start to go slower. Finally for diet, both my wife and I made a more conscious effort to eat more vegan, which helped me drop about 2 kgs; a weight I never thought I could maintain without constantly getting sick! 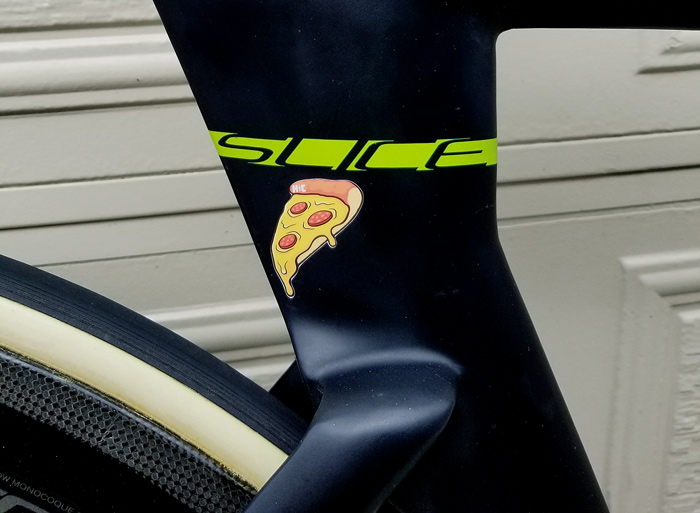 In the days leading up to the event I kept refreshing BestBikeSplit, hoping the weather would change. The forecast called for 15-17 mph winds coming directly from the north. Since the state TT course ran mostly east/west, this meant 20 degree yaw (effective wind angle for a cyclist moving at speed), which certainly was not ideal.

Thankfully, on the day of the event, the wind wasn’t as strong, and it had even shifted a bit east so NNE (5-10 degree yaw). This was just what I needed to feel a bit more confident. This also meant that I would get a bit of a tail wind on the way back, so that meant going harder on the way out than I would need to on the way back.

Putting it All Together

On race day, I passed my 30 second and 1 minute guys about 9 minutes/4 miles into my TT.

My 30 min max power was in the first half of the race, 285 watts at 28.4 mph (aka, the cross-headwind section). My best 20 minute average speed in the second half of the race 31.2 mph (aka the cross tail wind section). It felt like pacing perfection, all thanks to the calculated power plan I had generated via BestBikeSplit.

All that said, I came in second place at State TT. While I am happy with my performance, it still is a bit bittersweet (I am my own worst critic). But it told me I am headed in the right direction for master nationals next year. Of course it takes a village, and I would like to thank all the people that helped me achieve this, especially my lovely wife, who puts up with this silly hobby of mine.

Born and raised in Miami, Software Test Engineer Giancarlo Bianchi has been riding road bikes since he was 10 and racing since he was 15. With over 20 years of cycling experience you’d think he might be faster by now. In 2014 he traded beaches for mountains and currently lives in Boulder, Colorado where he enjoys riding his bike(s) and drinking craft beer (sometimes both at the same time).