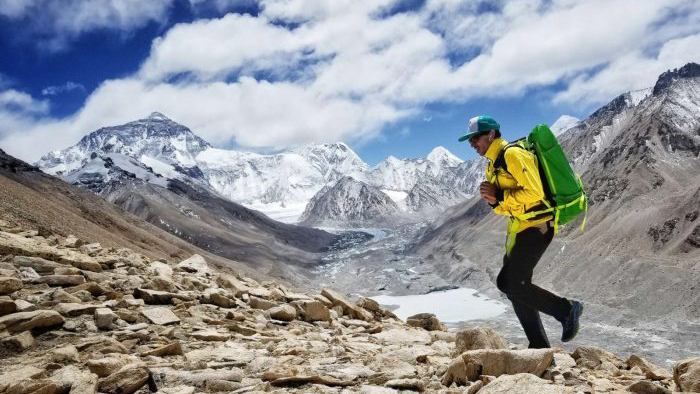 We sat down with Uphill Athlete’s Scott Johnston to learn how they used fat adaptation training to help mountaineer Adrian Ballinger successfully summit Everest without oxygen.

Uphill Athlete founders Scott Johnston and Steve House have decades of legendary climbing experience between them that they now use to help mountaineers conquer the world’s highest peaks and most adventurous ascensions.

Since they began coaching they have developed a number of science-backed methodologies on the best strength and endurance training and nutrition regimens that have helped the world’s best climbers push themselves to limits once thought impossible.

Uphill Athlete’s endurance training plans help endurance athletes do everything from get base strength and fitness for the rock-alpinist season and mountain running to climbing some of the world’s most famous mountains and lengthiest high-altitude treks.

We sat down with them to learn about how they used fat adaptation training with mountaineer Adrian Ballinger to prime his body for his successful summit of Everest without oxygen earlier this year.

When you first started working with Adrian, he had recently returned from a failed Everest attempt where he had trouble with temperature regulation. You assumed (and were later proved right after testing), that his reliance on carbohydrates to fuel his climb had been a major factor in him having to turn around. Can you explain a little bit what glycolytic metabolism is and why it can be stressful on the body of a climber?

Adrian came to Steve and I to request coaching only four months out from his departure for Everest in 2017.  We were reluctant to take him one because of the short time frame and potential difficulty in effecting the significant changes we felt he needed.

These ROS cause problems at the cellular and gene level.  Fat metabolism produces fewer ROS and hence cause less cellular damage and stress reaction.  This is incredibly complex stuff that biochemists have devoted their lives to studying.  Needless to say we, in this forum, will not do it justice.

While this scientific justification is important, I drew my conclusion and made my subsequent recommendation to Adrian based on 35 years of observation of many athletes and climbers under high training/racing and climbing loads.

What I first observed was that the higher intensity activity (hence fueled more by glycolysis) took a greater toll on the athlete in terms of recovery time.  Then I began to notice that athletes who were better fat-adapted bounced back from hard efforts than those who were less well fat adapted.

The third observation that connected the dots with Adrian was that with winter athletes this poor recovery often resulted in cold hands with Reynaud’s-like symptoms.

My layperson assumption was that the stress reaction was causing a shunting of the blood to the core and away from the limbs.  The symptoms Adrian described were exactly what I had observed in many winter athletes and climbers.

What are some (if any) of the resemblances between stress due to glycolytic metabolism in an endurance athlete competing in a 12-hour-long IRONMAN compared to those of a climber? What are the key differences?

The metabolic stress is no doubt the same for both.

The difference is that the IRONMAN competitor does not have to get up the next morning and do another 12-hour race.  The climber has to do this often for several days on end.

For a climber,  poor recovery has major consequences on his or her performance on subsequent days.

Again, from many years of observation I can say that the empirical evidence shows that; those with better fat adaptation recover faster and hence are able to handle a higher workload more often and bounce back sooner from it.

A good example is Kilian Jornet, who climbed Everest twice in one week without oxygen, breaking his own speed record in the process.

Kilian is highly fat adapted (27-hour hard efforts while taking in less that 400 Kcal) and has been training in this way for many years.

You suggested a very large shift in training and dietary choices for Adrian. Can you speak a little bit about what these entailed?

We didn’t suggest a radical ketogenic diet to Adrian, nor do I advocate them for my athletes. We suggested a moderate shift to an equally balanced macronutrient intake of one-third of his calories coming from fat, one-third from carbs and one-third from protein.

He chose to take a more ketogenic dietary approach which probably sped up the fat adaptation process. He also did most of his long low intensity workouts in a fasted state.

Learning to consume very little (or nothing) before a training session can be difficult. What tips did you offer to Adrian to help him adapt to this?

He struggled with even going an hour of exercise without eating at first. We started very gradually with the fasted workouts and slowly increased their length. At first he would carry some food but within a few weeks he no longer needed that crutch.

We work with many fat-adapted athletes who were not fat-adapted when they started with us. Most of them thought the idea of long and even fairly intense fasted workouts was completely unrealistic and an impossibility.

What are some data indications/comments, etc. you received from Adrian via TrainingPeaks during his training that led you to believe he was becoming more fat adaptive?

With mountain sports the TP metrics like CTL and TSS are much less accurate and predictive because as coaches/athletes in this area we don’t have a good way to measure power.

So, I was only able to make very rough judgements such as rates of climb versus heart rate to see that he was becoming more aerobically fit.  His comments were the best indicator that he was seeing some pretty big improvements.

About Susan Legacki
Susan Grant Legacki is the Content Director at TrainingPeaks. The founding editor of LAVA Magazine and a former editor at Triathlete Magazine and Inside Triathlon, Susan is an IRONMAN finisher, Boston Marathon qualifier, USAT Level 1 Triathlon Coach and certified Pilates instructor. When she's not editing or writing copy about endurance sports, you can usually find her training for them around Boulder, Colo.
#INSPIRATION#PERFORMANCE