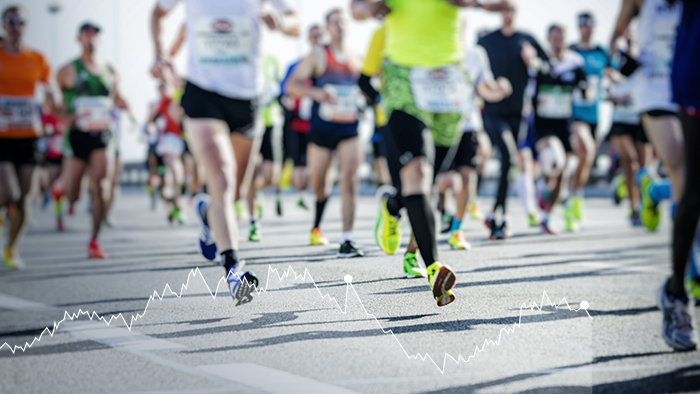 The Double: How to Peak Twice in a Racing Season

Did your “A” race not pan out or you’re still feeling that competitive fire? If you’ve decided you need to squeeze one more race into this season, here’s how to peak twice so you can find that race-ready form just in time.

With many of us finishing up our racing seasons, it’s an unfortunate truth that some of you may end up with a disappointing final race, an unexpected illness that left you off the starting line, or even a performance that has left you aching for one more chance to use your fitness.

If you have decided to try and salvage your season with a late season (or very early season) race, you’ll need to find good form fairly soon after you peaked for your previous “A” race.

Reaching very good form again is very possible,  and you can achieve even higher returns on your form in form of a Personal Best and a lot of fun doing something different. So how do you train to peak twice?

The above chart shows a pretty much perfect picture of one of my athletes who was training for her first IRONMAN 70.3 in July (her “A”  race) and then for a marathon in October (her “B” race). You can see a progressive build up of the form until the highlight in July, then a recovery and summer holidays drop and then again an increase in form in time for her marathon.

This is how it should be: in your macro training cycle, you go from general to specific training during the winter and spring months. In late spring and summer, you build intensity and volume progressively and very intentionally, reaching highest training scores (TSS) roughly three weeks before your main race.

The longer the race, the more focus should be on volume close to the race, while keeping a decreasing amount of intensity. Some call this training approach “reverse periodization,” since it focuses on intensity first, in the 16 to 10 weeks before the “A” race, and develops volume later, in weeks 10 through two weeks out from race day. Whatever model you use, the maximum training stress should be reached three weeks before the race, or, for very experienced and fit athletes who can recover fast, two weeks or even 10 days before the main race.

Such a week could be well over 1,000 TSS and thus one of the toughest of the year. The following gradual reduction in volume and intensity and tapering will bring you to the perfect form on the race day: You will be fit, ready and rested!

Then, plan on one, or more optimally two weeks of full recovery after your main race, and you can start the cycle for the second peak. In this cycle of eight weeks, you are basically going through the same training periodization as you did six months before your main race, but in a compressed form.

You start with two weeks of a mini-transition period (compared to six to 10 weeks in the main season). Then you have three weeks of increasing intensity, where in the third week the volume is getting serious and followed by two weeks of volume focus.

Then one week of tapering and you are ready! With this compressed and very focused preparation cycle, you can truly be flying in your second peak race. The main condition, however, is that you are fully recovered from your main “A” race – physically, emotionally and mentally.

With the second peak in the pocket, you can then ease into the off-season. This second peak, with the pressure of your “A” race gone and the anticipation of the rest and “doing nothing” in the off-season, can be a very sweet experience, and perhaps, as was the case for all of my athletes this fall, also a chance to set a new personal best!

About Tatjana Ivanova
Tatjana Ivanova has coached endurance athletes for more than 10 years. All her athletes, from first time marathoners to IRONMAN 70.3 World Championship qualifiers, have achieved their personal goals without a single DNF among them. Tatjana has two mantras for training and racing: "Joy in the effort" and "Pain is temporary, glory is forever.”
#CYCLING#IRONMAN#IRONMAN-70-3#TRIATHLON