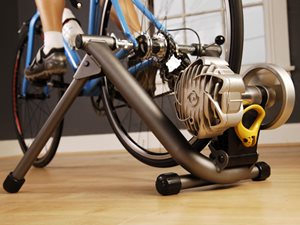 No matter who you are, I’ve designed 10 ways to make your sprint triathlon training productive, efficient and enjoyable.

That’s right. Don’t wait until 4 weeks out from the race. By signing up right now, you’ll trigger some very powerful components of your psyche – specifically the parts that inspire you to get off the couch or out of bed and begin your sprint triathlon training. The pressure of knowing that you are signed up for an event provides intrinsic motivation (“must be ready!”) combined with extrinsic motivation (“can’t embarrass myself!”. The latter motivation will be even more powerful if you tell the whole world that you signed up for a sprint triathlon.

There is nothing else that even comes close to motivating you than a test. One of the biggest mistakes that triathletes make during sprint triathlon training is not taking a baseline measurement, then repeating that measurement several times leading up to the race. Try to test every 4 weeks: a 500m swim test, a 1 mile run test, and a 3 mile bike test are perfect measurements for a sprint triathlon.

If you just got back from an explosive 2 mile run, then log-in to your social network to find that your friend just slogged out 12 miles, you may be discouraged. It is very important, however, for you to realize that the individual who is training for Ironman is actually making themselves slower when it comes to sprint triathlon training. So don’t be discouraged that you’re not “fit enough”. For sprint triathlon training, you should pursue speed, and not slow endurance.

There are many nutrition supplements that can assist you with explosiveness, power, speed and recovery. A few of the tried and true aids that are easily accessible to enhance your sprint triathlon training include: creatine, nitric oxide, CoQ10, branched chain amino acids and glutamine. Don’t be afraid of supplements! All those listed here have been researched many times and found to be both safe and effective.

Despite popular belief, overspeed training does not mean that you go out and swim, bike or run faster than you normally would during your sprint triathlon training. Instead, this term refers to neuromuscular training – teaching your muscles how to contract quickly and repetitively. For swimming, this could include practicing with a metronome. For running, you can include treadmill efforts at a pace that makes your legs turn over faster than they would while running outside. And for cycling, you can simply choose an easy gear and perform fast spins at 100+ revolutions per minute.

Jumping, hopping, bounding and leaping exercises, also known as “plyometrics” can significantly enhance your sprint triathlon training performance by teaching your muscles to recover quickly between contractions and also produce faster and more forceful efforts. An example of plyometrics would include perform a series of 3×10 jumps up onto a bench or box before you go out for run, or chest passing a medicine ball against a wall for 8 explosive reps. Doing a single plyometric session at least once per week for eight weeks leading up to your sprint triathlon will make you a quicker athlete.

Tapering for 2-3 weeks is a “trickle-down” technique from Ironman triathletes that unfortunately will leave a sprint triathlete unfit and stale for their relatively shorter competition. Five to seven days will adequately prepare most athletes for a sprint triathlon, and seven to ten days are all that is necessary for an athlete who is performing rigorous sprint triathlon training.

At many gyms, you’ll see triathletes rushing to the weights on race week to get that last little bit of strength training into their sprint triathlon training preparation. Unfortunately, it can take up to seven days for your body to fully recover from the muscle tearing and damage that occurs while resistance training. In the last week prior to your sprint triathlon, stay out of the weight room and skip your plyometric exercises. Instead, focus on a few quality swim, bike and run sessions at race pace intensity.

Although your body has more than enough carbohydrate storage to last the entire length of a sprint distance triathlon, that doesn’t mean that you should completely avoid any sugar during the race. Research studies have shown cyclists to be significantly faster and have a higher tolerance to the pain of exercise when they simply tasted sugar by doing a quick mouth rinse with a carbohydrate-based sport drink solution. During the last few weeks of your sprint triathlon training, try swirling and spitting a sweet solution. You’ll find that it gives you just a little extra energy, even if you don’t actually take a drink.

These ten rules of sprint triathlon training, brought to you by Ben Greenfield and the Rock Star Triathlete Academy, will ensure that the build-up to your race is smart and highly effective. For more practical and useful tips just like this, go to http://www.rockstartriathlete.com! If you’re interested in having Ben as your coach or using a training plan written by Ben, check out his plans on TrainingPeaks.

About Ben Greenfield
TrainingPeaks contributor Ben Greenfield, M.S. PE, NSCA-CPT, CSCS, is recognized as one of the top fitness, triathlon, nutrition and metabolism experts in the nation. For more information on coaching and training with Ben,'check out his blog/podcasts,'follow him on Twitter, or'visit his Facebook page.
#SPRINT-DISTANCE#TRIATHLON