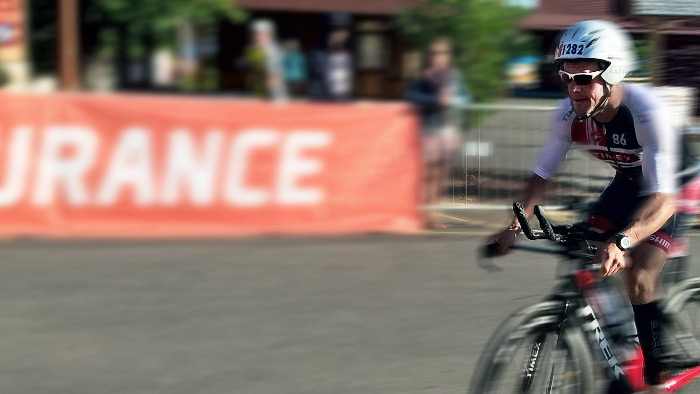 Elite Age Group athlete and Team Timex member Chris Thomas has raced 40 Half Ironman events. In that time, he has experimented with different ways to execute his bike pacing. In this article, Thomas analyzes the good and bad of the bike leg from the 2014 70.3 World Championships.

The 2014 70.3 World Championship was my thirty-ninth Half Ironman distance race. So, I’ve had some opportunities to figure out what works well for me and what does not over the years. I am a bit of a data dork and love to analyze my race data.

My effort on race day is dictated by triangulating my perceived effort, heart rate, and power in that order. I have found that I need to ride to my own feel. If I get too hung up on a certain power number or heart rate, then I do not race as well. However, I do know my zones very well from my training. When I line up for a race, I know exactly what I am capable of. I may have a good day or a bad day, but I am not just guessing what I can do. So I keep a close eye on my numbers like Normalized Power® (NP®), heart rate, cadence, and speed throughout the race to see how I am riding. I have found that this helps me to stay patient at the beginning of the bike leg, when my legs are fresh and to stay focused in the middle to later sections. I have had a tendency to flake out a bit in the past and my effort has dipped due to the lack of focus.

According to Hunter Allen and Andrew Coggan in their book, Training and Racing with a Power Meter, the optimal Intensity Factor® (IF®) range to race a Half Ironman is .83-.87. IF shows how intense your effort was as a percentage of your Functional Threshold Power (FTP).I have, personally, seen mine range from .76-.87 over the years.

Another one of the other parameters I look at after a race is the Variability Index (VI). VI indicates how smooth your power output was over the ride. The lower your VI, 1.0 being perfect, the more evenly your power production. Joe Friel has stated that an optimal VI for triathlons is 1.05 or below in order to run well off the bike. I have ranged between 1.00-1.08 during my Half Ironman events.

Here is a look at my data from the 2014 Ironman 70.3 World Championship in Mont Tremblant, Canada 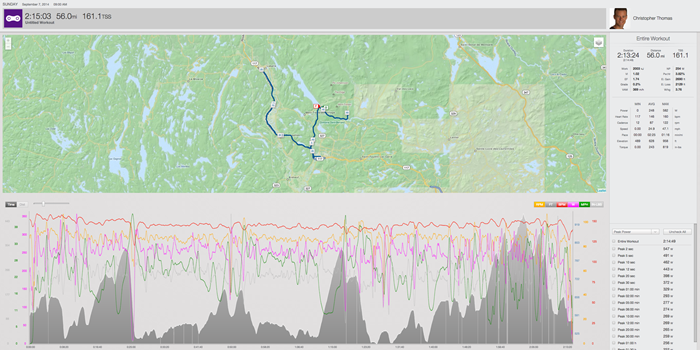 My Intensity factor came in at .82 for this race. While slightly below what I normally see, I felt that I performed well on the day. I had gotten dunked during the start of the swim segment, which cost me a little bit of time. So, I knew I needed to ride well in order to be in a competitive position starting the run.

Each race is unique and the dynamics of the Mnt. Tremblant bike course were frustrating at times as packs formed and the tightness of the course design caused a few bottlenecks. In spite of these unfortunate situations, I was able to ride consistent and pretty much stuck to my game plan. I ended up with a variability index of 1.02 for the entire ride. However, even with the proper VI, my quads were very fatigued coming off of the bike as I pushed the last 7.5 kilometers as hard as I could. My goal was to create as much separation as possible during this hilly section.

The bike effort brought me into T2 first in my age group. I had an uncharacteristically slow transition and dropped two places coming out onto the run. I could see my competition right in front of me, but I could not match the leg speed of my competition. I ended up getting run down by another athlete and just barely held on for fourth place in the M40-44 bracket by four seconds on fifth place. There were some speedy runners for sure. I was happy with my effort on the day and really felt that I gave everything I had.

While my bike numbers indicated I should have been able to run well, I had used a couple of extra bullets that clearly affected me in hindsight. This illustrates that using numbers can help you make good decisions on race day, even if you gamble a bit. Racing is all about fitness, execution, and good decision making. Using data allows you to build on each of these elements. While my numbers were good, I gambled a bit and it was a good learning experience.

Take the guesswork out of your race day planning. Get a race day power plan from Best Bike Split.