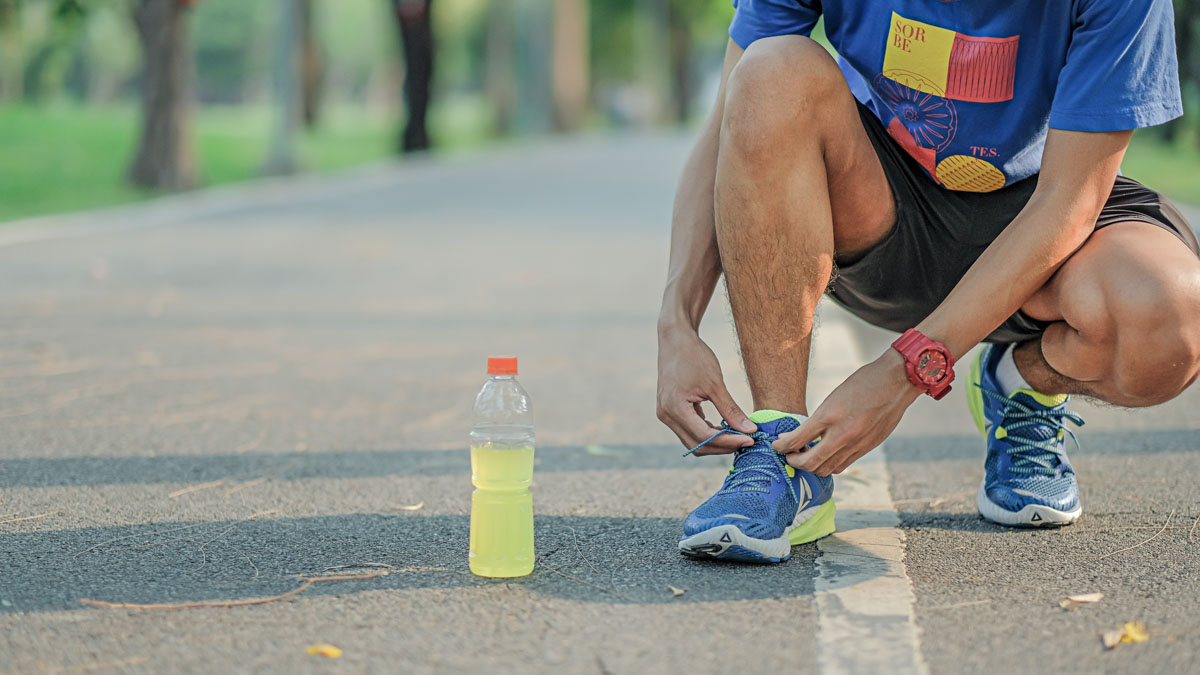 Sodium intake has been linked with hypertension and other diseases, leading to health guidelines championing low-salt diets. Should athletes comply?

Salt has a serious PR problem. Consumption of Sodium Chloride (NaCl) has been linked (in both scientific papers and in the general press) with a rise in cases of hypertension, or high blood pressure, in the population at large. Because hypertension is a huge risk factor in all manner of nasty cardiovascular diseases, salt has, by association, taken a great deal of flak for its alleged contribution to this growing issue.

In direct response, government guidelines in most countries, including the UK and USA, currently recommend very low daily salt intake levels (typically between 2000mg and 2500mg of sodium; salt is ~40% sodium so this equates to roughly 6g per day). The American Heart Association even goes so far as to suggest a target intake of under 1500mg of sodium a day for optimal health (3.75g salt per day).

When taken at face value, there’s an appealingly simple reason why this association between salt intake and hypertension has been drawn. It boils down to the fact that as you consume more and more salt, your body tends to retain more and more fluid in the blood to maintain acceptable blood sodium concentrations. This has the effect of expanding total blood volume and therefore acutely increasing blood pressure, i.e. elevating BP in the short term.

As an aside, this is precisely why we recommend using a saltier drink in the immediate build-up to hot or long races—so that you start with increased blood volume before a period of heavy sweating.

While there’s no debating that this acute effect of salt consumption on blood pressure is real, the link between sodium intake and chronic (long-term) hypertension is potentially a lot more complex, and has been the subject of growing debate in recent years: many people with high blood pressure don’t respond well to a low-sodium diet; and many people who eat a high-salt diet don’t end up with hypertension. So what’s the best course of action?

How Much Salt is Enough?

At the more extreme end of this emerging debate there are researchers such as Dr. James DiNicolantonio, author of ‘The Salt Fix’, whose opinions are summarized nicely in this academic paper.

DiNicolantonio and a number of his peers are starting to promote the idea that other factors (such as high sugar consumption) are potentially more influential in the development of long-term high blood pressure than sodium intake alone.

In his writing, Dr. DiNicolantonio goes so far as to argue that, for the vast majority of the population who are not ‘salt-sensitive,’ increased salt consumption (or at least unrestricted consumption on the basis of personal taste and preference) are unlikely to adversely affect blood pressure in most healthy people. He believes that it may even be worse to under-salt than it is to over-salt—a claim that provoked a strong backlash in the media when his book initially came out, as it definitely flies in the face of conventional thinking.

While it has to be said that a few of his theories are a little ‘out there’ for my liking, DiNicolantonio on the whole paints a very convincing, largely evidence-based picture of low sodium guidelines being potentially misguided and in need of a significant overhaul. One standout idea that he promotes heavily is that, rather than simply being linear, the relationship between sodium intake and health is far more likely to be ‘J’ Shaped.

What a ‘J’ shape curve demonstrates is that, as is the case for just about all essential nutrients in the body, there are both lower and upper limits for what is optimally healthy. In other words, consuming too little sodium is as likely to result in health issues as consuming too much, and this includes the specific effects it has on blood pressure.

Data published in 2017 from a 16-year study of blood pressure in a group of 2600 Americans seems to agree with DiNicolantonio, as they showed an INCREASE in blood pressure in those who routinely consumed less than 2500mg of sodium per day when compared with their peers who ate more. While the exact mechanisms causing these findings are likely to be pretty complex and require further investigation, the overall message seems both clear and plausible: too little sodium in the diet is likely to be as damaging as too much.

As a result, the conversation on sodium and blood pressure needs to start to shift to looking at what is optimal, rather than simply striving to promote arbitrary, universal upper limits for consumption, which has been the trend to this point in time.

If we can accept that consuming too little sodium is as problematic as consuming too much for health and blood pressure, the conversation around necessary salt intake for athletes starts to get quite interesting.

The ‘average’ (read ‘non-exercising’) person may only require ~2000mg or less of sodium per day to meet their basic physiological needs. The average Western diet allegedly contains about 3,400mg/day, so it’s easy to see why most folks are able to meet and exceed this without even thinking about it. It’s also easy to see why general guidelines to reduce sodium intake might not be completely misguided, as many people are probably routinely consuming quite a bit more than they need.

But what about the athletes? The average liter of human sweat contains ~1000mg sodium (range ~200mg/l – 2000mg/l) and sweat rates easily reach 1.5-2 litres per hour in trained athletes, so it’s very easy for some of us doing multiple hours of exercise a day, on multiple days of the week, to rack up some significant sodium (and fluid) losses compared with the rest of the population. These losses can far exceed the 2500mg or even 3400mg/day that are recommended or consumed in a ‘normal’ diet.

This is especially true for anyone with exceptionally high rates of fluid and sodium loss or anyone doing sports that demand hours and hours of practice or training on back-to-back days. As someone with both salty sweat (I lose around 1800mg/l) and a high sweat rate (2l per hour in hot conditions), I can lose 6-8g of sodium in a hard 2-hour run.  In the past, I learned the hard way that taking insufficient sodium in and around exercise left me performing poorly and feeling terrible. For an athlete like me, trying to get by on the recommended 2000mg/day would be far from optimal for health or performance.

An excellent paper looking at the role of sodium in the diet of athletes summarizes the topic neatly. It points out that there’s been a widespread acceptance of the fact that athletes who sweat a lot need more fluid than the average person, but there’s been much less emphasis placed on them potentially needing a lot more sodium too—probably because it contradicts the perceived wisdom that sodium is ‘bad’ for you.

Another fascinating case study focused on an athlete in Germany who suffered over-training type symptoms (and increased blood pressure) when undertaking regular endurance training. At the time, she was following a low sodium diet that she perceived to be ‘healthy,’ and was able to reverse her condition simply by increasing dietary sodium intake—avoiding the usual decrease in training load that is normally required to correct symptoms of over-training syndrome.

This is consistent with a host of anecdotal reports we’ve had from athletes over the years who’ve attempted to follow ‘best practice’ by eating low sodium while simultaneously training hard and losing a lot of sodium in their sweat.

It’s also interesting to note that despite advocating for a blanket target of 1500mg of sodium per day for all, the American Heart Association added this caveat to their own website:

“Insufficient sodium intake isn’t a public health problem in the United States. The guideline to reduce to 1,500mg doesn’t apply to people who lose big amounts of sodium in sweat, like competitive athletes, and workers exposed to major heat stress, such as foundry workers and firefighters, or to those directed otherwise by their healthcare provider. If you have medical conditions or other special dietary needs or restrictions, you should follow the advice of a qualified healthcare professional.”

The bottom line on sodium intake for athletes (or anyone who sweats a lot during the course of their day) is that you should strive to be roughly in-line with your individual sodium losses as a minimum. To use an analogy from the field of Game Theory, sodium consumption should ideally be a zero-sum gain. Intake should essentially cancel out output and therefore, in theory, the effect on overall sodium balance (and as a result, blood pressure and other homeostatic measurements) should be net-zero.

And if Dr. DiNicolantonio is to be believed, then even taking in a little bit more sodium than you need ought to be fine, because the body can deal with a degree of excess relatively easily (assuming the kidneys are functioning well) and avoid any risk of incurring a deficit over time.

In summary, it’s very important to point out that I am neither a medical doctor nor should anything written in this article be interpreted as prescriptive advice on what to do if you’re an athlete concerned about the effect of sodium consumption on blood pressure. There’s evidence that some people are more ‘salt-sensitive’ than others, and any significant changes to dietary intake should always be discussed with your doctor if you’ve been diagnosed with hypertension or a related medical condition.

There are also complex interactions between sodium and fluid balance affected by blood pressure medications to take into account which have not been covered here.

All that said, the main hope is that the information in this post might be useful in stimulating some thought by providing background information on what is a complex and controversial topic in health and performance.