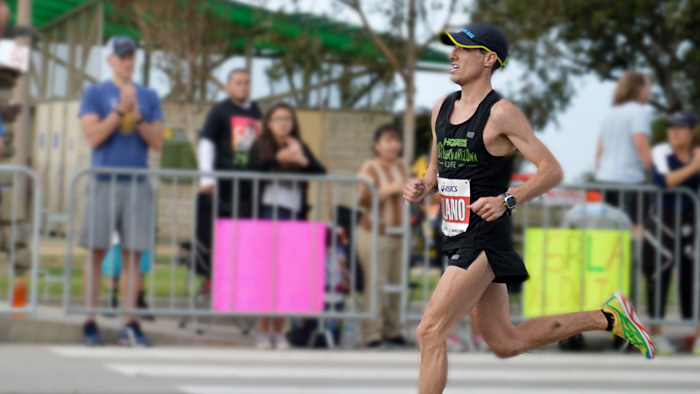 For coaches and athletes alike, I recommend giving it a couple of days before really digging into your data from any big race, but especially a marathon. You’ve invested so much mental and physical energy into the race that you don’t want to analyze the results until you have a clear head. Once you are ready though, it’s a blast to get in there and see what happened out there and begin to see what you can do better the next time. As an example, I am going to use Matt Llano’s race at the USATF Marathon Championships in LA on March 15.

At first glance, Matt did a great job of running even splits. His first half was 1:08:07 and his second half was 1:08:06. Pretty crazy. But, as is often the case when analyzing data, that is not the whole story. The LA course has a lot of undulation, much of which I would classify as severe.

A Race of Three Sections

What I wanted to figure out was did he actually run an even effort throughout the race? Digging into his splits I think it would actually be incorrect to say that he ran a truly even race. It was more like a race that had three sections. If you notice he did not split his watch the first seven miles. This was somewhat by design. The race plan was to be very conservative early for two big reasons. First, we knew the course had many of its most severe ups and downs in the first 10k or so. I didn’t want him to go bombing down those early downs and have him attacking those early ups only to have it beat up his legs for later on. Second, it was warm for a marathon. The temperature was in the high 60s and the start and 80s at the finish. We knew that even though Matt typically handles the heat pretty well conditions like that are going to catch up to you eventually, especially if you go out too fast. So when you see he averaged 5:14 (2:17 marathon pace) for those first seven miles I think we can look at that and say he nailed the first section of the race. I’ll get to the full race analysis below, but before that, I think it is important to remember that there is more than just numbers and charts when we talk about analyzing a marathon.

Though it’s not necessarily measurable in any sort of tangible way, we need to also consider what was going in an athlete’s mind during a race. Ultimately, the mind has quite a bit to do with the body’s performance during a race so getting an athlete to give you a detailed recap of what was going on inside their head during a race is vital information. Here is an excerpt from Matt’s recap of the race as he wrote it on his TrainingPeaks file:

My plan coming into this race was to stay conservative early and try to build throughout, but that would really be dependent on what the other athletes in the field were doing. Immediately when the gun went off, Ryan Hall and the international field were out FAST. The majority of the rest of the American field hung back and didn’t attack the early hills as hard. Scott [Smith] and I stayed together until around 7 or 8 miles, when I noticed Daniel Tapia and Jared Ward seemed to be getting antsy. Coincidentally, at about the same point, I noticed a huge billboard with Robbie Rogers (the first openly gay man to play in a top North American professional sports league) on it for the LA Galaxy along with the word “STRENGTH.” I really drew on that since his story and mine are so similar and decided to cover the slight move Jared and Daniel were starting to make. It prompted Jared to turn to me and say, “I’m glad you came to play, too!” Over the next couple of miles, our trio continued to press the pace a bit, throwing down a few low 4:50s, but nothing I felt I couldn’t handle. We took water as often as possible (nearly every mile or two), even looking after one another when one of us missed our special fluids bottle. It turned out to be the right decision to cover that move, and for the next 12 miles, Jared and I would run nearly stride for stride until he started to pull away from me around mile 19 or 20. Though I had flashbacks to what happened to me around that same point in the Chicago Marathon this past Fall, I felt fairly confident that I wasn’t slowing down too much so I tried to stay positive and keep the momentum going. I knew that the final couple of miles were downhill, so I just shifted my attention to getting to that point. I felt that once I got there, I wouldn’t get passed on the downhills, and that turned out to be exactly the way the rest of the race panned out. I could see one of the international athletes a few hundred meters ahead of me, and I knew he was in 5th overall, which is something I really wanted. I was gaining on him quickly for the next mile or two, but as we entered the 26th mile, he found another gear that I wasn’t able to tap into this time and he stayed well ahead of me. Happy with the effort today, but still can’t wait to get back to work. A lot to do if I want to make the Olympic Team next February!

Reading his recap was a huge reason I decided to break this race into thirds in my analysis. You can tell that for Matt those first seven miles were a breeze. He was holding back, per the plan, and felt good the whole time. The second section of Matt’s race ended up being from mile eight to mile 19. As he passed the seven mile mark and decided to cover the move that Ward and Tapia were making his effort (mentally and physically) shifted from holding back to racing. The next seven miles were covered at 5:05 per mile (2:13 marathon pace) and then miles 15-16 were covered in 4:52 per mile (2:07 marathon pace). This was no doubt when things started getting difficult. In speaking with Matt after the race he mentioned that even though miles 15 and 16 were downhill he could definitely feel an increase in not only his pace but his effort as well. So to me, the last section of his race really began at 16 miles.

Those last 10 miles were made particularly difficult mentally by the fact that this was when Jared Ward began to pull away from him. By 30k (18.6 miles), Ward was 15 seconds ahead. That was after Matt had slowed a bit with splits of 5:08 (mile 17) and 5:15 (mile 18). Here’s where he had to get tough. And as he mentioned in his recap above he also had to deal with the fact that this was almost the exact spot where the wheels had begun to come off for him at the Bank of America Chicago Marathon last fall. He rallied with miles of 5:04 and 5:09 for 19 and 20, before a tough stretch from 21-23 where he averaged 5:27 pace, granted with a tough uphill in there. The saving grace physically and mentally (as he alluded to) was that the last three miles of the race were downhill. He picked it up just a touch over that last 5k to finish in 2:16:13. That was hugely different than Chicago where he hit the proverbial “wall” and lost several minutes over the last 10k. Still, because his last 10 miles were significantly slower than his stretch from 8-16, I wouldn’t say he really ran a great second half. It was more like he ran a conservative first seven miles, a great next nine miles and an okay last 10 miles. Overall, that came out to a pretty good day, but we have plenty to work on. Namely we need to continue to put in lots of miles in order to be strong enough to go from okay to great over those last 10 miles.

So I hope that gave you some ideas as to how to analyze you or your athletes’ races. It’s not always black and white. I challenge you to go beyond the mile splits. Look closely at the elevation charts. Analyze the mental data and compare it to the physical stats. If you use heart rate data (which we didn’t for this one) then learn as much as you can about how the body handled pace change, elevation change, etc. And don’t forget about the weather. Look at temps at the beginning of the race and at the end. All of these things and more go into dissecting a race from all angles. Remember, we do this not to nitpick and not to be overly positive or overly negative about a result. We do it for one simple reason– to get better next time!

About Ben Rosario
Ben Rosario is the head coach of Northern Arizona Elite, a professional distance running team in Flagstaff, Arizona. The team has won multiple National Championships and produced world class times including a 1:01 half marathon (Matt Llano), a 2:12 marathon (Jordan Chipangama) and a 15:21 5k (Kellyn Johnson). Ben's accomplishments in the running industry include co-founding Big River Running Company in Saint Louis, Mo., directing the USA Cross Country Championships in 2012 and 2013 and directing the Nike Festival of Miles charity track meet. He has also created NAZ Elite training plans to help runners of all abilities. 'Follow NAZ Elite on Twitter: @NAZ_Elite and Coach Ben at: @BenRosario1
#MARATHON#RUNNING