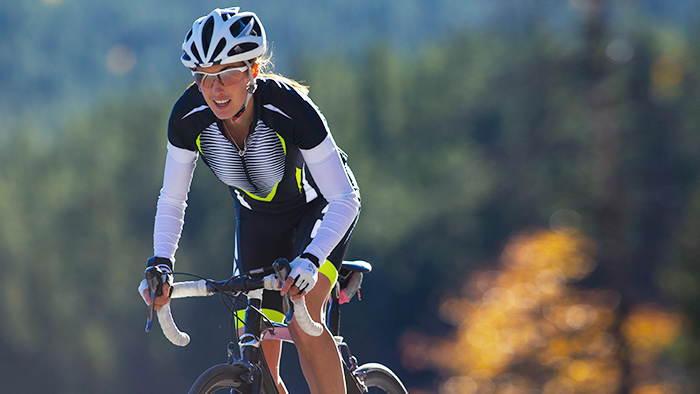 Riding Quiet: How to Perfect Your Technique For Better Output On the Bike

By putting an emphasis on technique with the following drills, you’ll enter next season a more efficient, powerful rider.

When I’m out riding I’ve noticed that roughly 70 percent of the cyclists I come across appear very unstable on their bikes. I am willing to counter that with the notion that you do not need to look good to go fast. However, I often feel more comfortable when I ride with a group of local juniors rather than the local pros. Why? For me the answer lies in the value of technique.

Now that I have likely insulted a good portion of the readership, let’s get into the meat of the matter. I believe that many cyclists have lost interest in having good technique on the bike. This is not meant to be a shot at the weekend warrior or newbies—there are 10-year professionals who can’t seem to make the bike go straight, or find a comfortable gear, for the life of them. Ultimately I would like to present some notions on how to combat this, but first I’d like to look at the culprit. Why do people not care about technique?

Where did the technique go?

In the past decade, advances in sports science have been substantial, and in turn the advances in resources available to the masses have gone through the roof. Riding without a power meter is nearly akin to riding without a saddle these days—it’s just not done. We have amazing analytics at our fingertips, thanks to companies like TrainingPeaks. I am a big believer in all these tools, and they help athletes go faster and achieve their goals more quickly. However, I think they’ve also shifted the emphasis to what computer numbers we’re seeing while we’re riding, which in turn has overshadowed the value of simple cycling fundamentals that translate to going faster (and smoother) on the bike—as I’ve previously written about.

I figure one more of these technique articles and I’ll cement a reputation as the guy that hates power meters, which couldn’t be more untrue. I spend most of my day crunching power meter metrics seeking out those coveted 1 percents.

With all that ranting and raving though, it’s time to introduce the concept of, “riding quiet.” Power meters can help us get those 1 percents, but ultimately a lot of riders are leaving as much as 10 percent of wasted energy out out on the road, an amount that can easily be ascertained by learning to ride quietly. What I’m getting at with “riding quiet” is being smooth on the bike so as to not waste energy, having a complete tool box to be comfortable on all terrains, and ultimately going fast for the least amount of energy output possible.

How to Ride Quiet

As athletes get into March, April and May, power meters take precedent—and watts rule. However, from November through February, when athletes are simply putting in miles during their build phase, there is a lot of quality work that can be done from a technique standpoint. Here are three important areas that can be easily worked into winter training, and will pay big dividends when the time to go fast comes:

Everybody has a self-selected cadence that they find most comfortable, whether it’s 60 rpm or 95 rpm is irrelevant. Different contexts are optimized at different cadences, and if you can’t comfortably do it all, then you’re leaving time (and energy) on the road. Here are two key exercises to work on:

Each week do a long endurance ride (about double your average week ride time, anywhere between two and four hours), and in the last 45 minutes do a set of 6×1 minute efforts, at High Z3/Tempo power (88 to 90 percent FTP) and 110+ rpm. Recover for 1 minute between each, so they come pretty fast. These are challenging at the end of the ride, when athletes are tired and the natural tendency is to slog a big gear, but without adding too much total intensity to the load.

SFR, big gear, muscle tension— it’s got a million names. The name doesn’t matter, but the effect does. Low cadence, high torque efforts, done in mid Z3/Tempo (85 to 88 percent FTP), build force, strength, stability on the bike, and the low cadence improves type 1 fiber recruitment, which translates to using more of what you’ve got when it comes to sustained, aerobic efforts. A good go-to workout is:

These are best done on a moderate-grade climb, with an aim not to just produce the power, but to keep a smooth, even pedal stroke and relaxed shoulders.

Ride out of the saddle! Too many times people can’t comfortably get out of the saddle, and that’s a problem. Whether you are a mountain biker, a road biker or a cross rider, standing is huge. If you can do it but it doesn’t look pretty, then you have all winter to work on it. Pick days to ride all the rolling hills out of the saddle, or do some steady climbs alternating 1 minute seated with 30 seconds of standing. It doesn’t need to be fancy— it just needs to be done.

And be cognizant while doing it. The most important thing, where I think many riders fall short while standing in the saddle, is keeping the bike going straight. That may sound very patronizing, yet I see it every time I ride. A gentle rock of the handlebars between each arm is good, and natural, but when the front wheel is swerving back and forth, you’re going farther than you need to—and that’s no good. We want to get to the finish as soon as possible, so don’t waste time covering more distance to get there.

This is less structured work, and more just something that you can build into any time when you’re just doing Z2 Endurance or Z3 Tempo work. This may come across as snobbish, and overly focused on aesthetics, but the truth is it is all about bioenergetics. There are many ways to create 300 watts of power on the road. They all create 300 watts, but some of those ways cost more in metabolic energy than others. The goal is always to have the minimal metabolic cost, for the maximal mechanical output. Energy conservation is really the essence of riding quiet:

I truly believe that incorporating these elements in training through the winter, and placing value on them, translates to free speed down the road. I fully accept, and advocate, that when it comes time to race, there is a moment to “get ugly,” throw it in the big gear, and just get over the climb. However, the rider that is doing that in hour one of a three-hour race, is not going to be doing that in the final miles of the race—they’ll simply be too tired. Strive to keep it smooth for as long as possible, so when it’s time to get ugly and go fast, it’s still an option.

Nate Wilson is the owner and head coach of Catalyst Coaching. While balancing professional racing, with pursuing a Physiology degree at the University of Colorado, Nate realized that coaching was the perfect crossover between the two. Nate has been fortunate to work as the head coach and director for the USA Cycling U23 Road National Team. Nate enjoys the chance to apply his knowledge and experience to help athletes progress to their maximum potential.