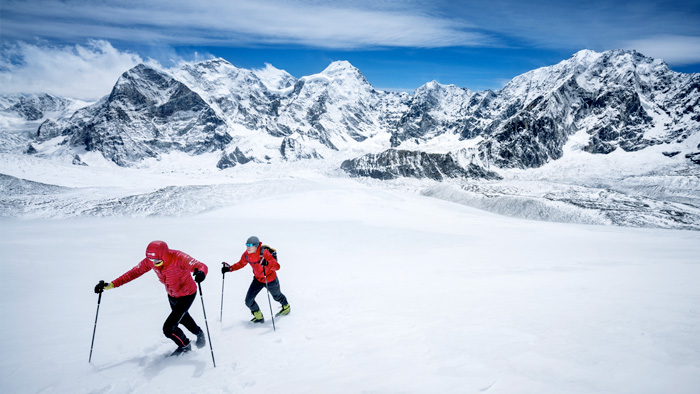 Reaching His Peak: Alpinist David Goettler Uses the Help of a Coach to Push His Limits

Top performance can be a matter of life and death for alpinist David Goettler. After years of being self-coached, Goettler realized he needed an expert to help him attain a higher level of fitness. Goettler describes how hiring a coach has helped him achieve his goals and inspired him to reach for more.

I’ve been doing sport for as long as I can remember, mainly mountain sports like rock, ice, and alpine climbing. For the past 20 years, I’ve been going mountaineering all over the world; from the Alps where I grew up to the 8000m peaks of Himalaya where my focus as a professional athlete is right now. I’m also a Union Internationale de Associations d’Alpinisme (UIAA) mountain guide and when I am not on an expedition, I regularly work with clients climbing in the Alps and beyond.

I have always been motivated to train for these different activities in the hope that I could continue to improve and achieve greater goals. I used to design my own training program, consisting of running, cycling, swimming and indoor climbing. All of this was done at slightly random intervals, inconsistent work loads, and with poorly defined goals. Eventually, I realized that I wasn’t making the progress I expected or reaching the levels I wanted to reach. I was especially frustrated by my lack of ability to gain more endurance and speed; to have the power to keep going endlessly uphill.

That’s when it became clear that I needed to change something about how I was approaching my training and I decided to begin working with Scott Johnston from The Uphill Athlete. Scott and I have been working together for the past 10 months, and as we are still on that journey together, I have no idea where it may end up, but so far I am more than happy with everything that has come of it!

When I started working with Scott, one of my main goals was to try and make a significant step forward in my performance in preparation for an upcoming expedition with one of the best alpinists of our time, Ueli Steck from Switzerland. I knew that to climb with Ueli meant I would have to climb fast and perform really well at altitude for long days and being able to keep going for hours would be imperative. Even though I’ve been climbing in the Himalaya for years, I definitely felt the pressure of trying to take my climbing, or more specifically my endurance, to somewhere close to Steck’s level.

Our objective was to climb a new route, alpine style, on the south face of Shishapangma (8026m) in Tibet. Ultimately bad, unstable weather prevented us from being able to attempt our new line, but whilst waiting hopefully for the weather to improve we climbed two other routes on the same face. Both times we climbed in a ‘single push’ from 5,700m up to 7800m and 7600m respectively. Both days were spent climbing for the whole day, up to 21 hours on the go, climbing up and then down-climbing on steep, alpine terrain.

On both days, I felt totally great! For me it was a welcome surprise and a bit of a revelation to see how well I could keep up with Ueli, how much stronger I felt, and how well I could perform compared to my previous expeditions.

I’m certain that attaining this “next level” has been made possible because of my work with Scott. Having a professional coach to make a structured, customized training agenda, and using TrainingPeaks as a platform to share data from each training session means that even though Scott is in the USA and I live in Europe, anything is possible. He can see exactly what I’ve done, how my body has reacted to it, and decide what is the best thing to do next.

I have no doubt that my work with Scott has resulted in huge advancement of my physical performance. His professional experience and my personal motivation for guided and measured hard work have unlocked a potential that I didn’t know was even there. I’m excited to see where this will take us!

Thank your coach and let them know how much you appreciate their help.

About David Goettler
David Goettler is a German alpinist and UIAA Certified Alptine and Ski Guide who specializes in climbing remote mountains around the world.
#PERFORMANCE