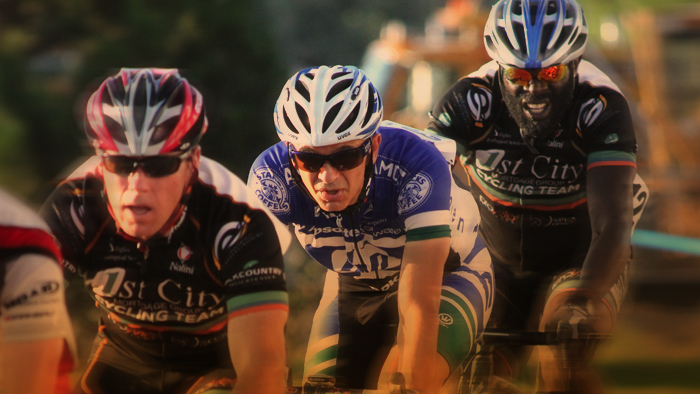 Racing in the Heat: Are You Ready?

Here’s how to stop heat and humidity from sapping your best performance on race day.

The season of sizzle is upon us! Training and racing are hard enough, and when you add the component of heat and/or humidity, it can wreak havoc. How can you handle the heat and still race well? What works…and what doesn’t?

Remember that body water is your most effective means of dissipating heat. Here’s how it works: blood circulates to the muscles to bring fuel and at the same time picks up metabolic byproducts, one of which is heat produced through muscular contraction. Blood then circulates to the skin to offload the heat through several mechanisms, the most effective being evaporative cooling – a.k.a., sweating!

As you sweat, you essentially “evaporate” water from your blood through your skin and as your plasma volume drops, the body pulls water from other spaces to try to keep blood volume up. If you’re slack on your hydration, you compromise your blood volume and thus blood circulation to the muscles and skin. You also compromise the amount of water in your body for sweating and thus your body’s cooling mechanisms.

What Your Body Needs to Stay Hydrated

So now that we’ve established that hydration is the key to performing in the heat, let’s have a look at what else your body needs – besides water of course – to stay hydrated. Your small intestines are where 95% of nutrient and water absorption takes place. Physiologically, there are specific things the body needs to create a net water gradient in the small intestines so that it can absorb water.

These key things are:

Why Does the Body Need the Above?

Sodium is absorbed into the cell by several mechanisms, but chief among them is by co-transport with glucose, sucrose and amino acids. This means that efficient sodium absorption is dependent on absorption of these organic solutes.

Without glucose, the constant “flow” of sodium and water into the body becomes rate-limited (i.e. slows down as the body tries to find glucose to work with the sodium for the co-transport effect described above). This is why sports drinks that actually hydrate (e.g. don’t just sit in the stomach and cause sloshing/bloating/discomfort) contain a small amount of sugar (glucose and sucrose) as well as sodium for optimal absorption and hydration.

There is the notion of “overhydration” a.k.a. exercise associated hyponatremia. This notion is gaining traction due to blanket recommendations to drink before you become thirsty. Two key factors to consider here:

Do You Need More Salt?

So does this mean you need salt tablets to replace sodium lost through sweat, as many athletes may be led to believe? No, you do not need salt tablets! Even as a “salty sweater”, your body has ample sodium stores, and you will consume plenty of sodium from the foods you are eating and (if you chose your hydration source wisely) drinking.

Salt tablets contribute more stress to the GI than most people realize. The chloride ion of sodium chloride (common salt), while both necessary for cellular function and also lost through sweat, is not lost at rates high enough to warrant high load replacement during exercise. The chloride ion interferes with what we call the membrane potential of the intestinal cells, allowing the spaces between the cells to “open up”, releasing endotoxins, causing an abnormal water flux and severe diarrhea. Moreover, when you ingest a high dose of sodium, you end up with a bit of reverse water flux; water goes to sodium so if you have a high concentration of sodium in the digestive tract, water will leach into the GI tract rather than be absorbed into the blood. This contributes to additional issues with gut sloshing and dehydration.

In a nutshell, you do not need salt tablets. What you do need is a “physiological” sports drink that supplies ~600mg sodium per 16-20oz, and to get your calories from real food (which, in this day and age, has plenty of added sodium).

Be aware, plain water does not hydrate! You need a bit of sodium and glucose to actually pull the water into the system. Plain water can cause a “volume” response – signaling your body to pee out more than you’ve taken in. Again, work with physiology and remember that there is no pure water in the body; body fluid is comprised of electrolytes, glucose, and water.

Besides enabling your body’s own cooling mechanism via hydration, you can also cool your body externally on a hot day. What is so critical about keeping cool? The main factor is lengthening the time it takes your body to reach its critical core temperature. One intrinsic mechanism to keep you from overheating is slowing down – we often recognize this as fatigue. There are several aspects to fatigue; central nervous system, peripheral, metabolic. All of these contribute to slowing down as a self-protecting measure. The one commonality is temperature. By reducing your rate of core temperature rise, you can reduce the signaling to the CNS the need to slow down; moreover, peripherally, you can reduce the denaturing of contractile proteins in the muscle (thus you can still generate power and speed). There are a few ways to manipulate the rate of core temperature rise. One, of course, is staying hydrated (and if you can ingest cold drinks, then do so)! The second aspect is doing a few things to “pre-cool”, effectively reducing your core temperature at the start of the race so you have a longer time to reach a critical core temperature (i.e., fatigue).

Three Ways To Cool Your Core

During the race, in an ideal situation you’d be slurping down ice cold 3-4% glucose+sucrose+sodium hydration drinks and sucking on cold popsicles throughout the race. But many times the ideal isn’t practical. Anything you can ingest that is cold will help reduce the rate of core temperature rise. Grab some ice water from an aid station and drink it down; even suck on the ice. But do not pour ice water on your head! The ice water is too cold and the head has a lot of blood vessels. The cold of the ice will constrict those vessels, sending hot blood back to the core as described above. Cool water is fine. It’s an issue of temperature gradients; cool water will help pull heat away as if you were sweating buckets, ice water will force heat back into your body.

Cool water on the forearms is also a great heat off-loader, and using UV-protectant armskins to prevent sunburn and to hold cool water against the forearm will help keep core temperature rise at a lower rate. Above all else, keep drinking! Start early and drink often. Think “sip sip, nibble nibble”. Eat food and drink fluid that is as cold as you can get on course, but don’t hold it against the skin.

If you follow these guidelines, you’ll find that your summer races will be hot but doable. Race well, race hard, and have fun!

About Stacy Sims
Dr. Stacy Sims has contributed to the environmental exercise physiology and sports nutrition field for more than 15 years as both an athlete and a scientist. Prior to founding'Osmo Nutrition, Stacy served as an exercise physiologist and nutrition scientist at Stanford University 2007-2012 specializing in environmental and nutritional considerations for recovery and performance. Preceeding her work at Stanford, she was a Senior Research Scientist in Clothing and Textile sciences at Otago University investigating the interactions of human performance, fabrics, and extreme environmental conditions. Not only an elite athlete herself, Stacy has extensive experience working with athletes at the highest levels of sport worldwide, from the Olympics to the Tour de France.
#CYCLING