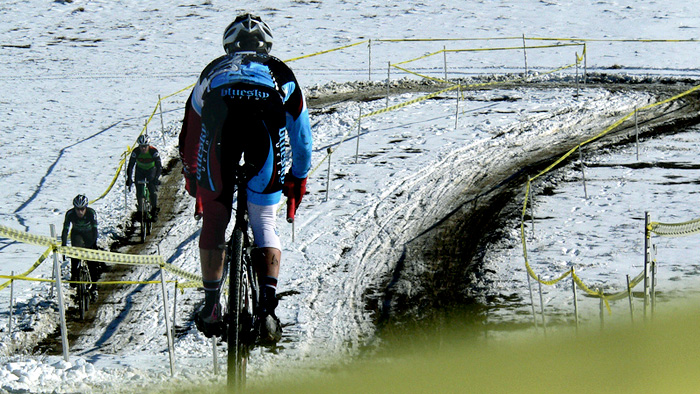 Racing Cyclocross in the Cold: The Basics of Thermoregulation

Staying warm but not overheating is a key component to racing well in the cold. Learn more about how you can help your body regulate temperature and be fully prepared to race when the temperature is low.

It’s November, soon to be December, and there are still bike races going on. For the hardy (crazy?) few that are still competing into the depths of winter it’s only going to get colder. Racers will have to consider what effect cold will have on their performance. But whether you are a first time visitor to the frozen pain cave or a seasoned veteran, having an understanding of how the body regulates temperature during exercise in the cold has the potential to make you more comfortable and maybe even increase your performance.

In fact, as far as factors one can control on race day, it could be argued that being aware of factors affecting an athlete’s thermoregulation is as important as pacing and being properly fed before a race. This topic of racing in the cold will be addressed in a series of related blogs. Most of the examples will focus on cross racing, but much of what is presented here can also translate to other forms of cold weather endurance competition. This this blog will cover the basics of thermoregulation. This deals primarily with how the body maintains a thermal balance and the environmental factors that affect that balance.

In order for us to understand performing in the cold we must first grasp the concept of heat. For humans to function they must maintain and regulate a normal body temperature. This temperature is ~98.6 °F and varies per individual. If body temperature falls out of the range of 95-105.8 °F athletes will see severe decreases in their performance (but really, if you fall out of that range a decrease in performance will be the least of your worries). When the body breaks down food for energy to do work only about 20 percent of that energy is actually used to do work; like pushing pedals. The remaining 80 percent is lost as heat energy. During exercise, when the intensity increases the amount of heat generated increases as well. In order to maintain a healthy temperature the body must dissipate the extra heat that is being generated. The body does this by pumping blood heated from metabolic processes to the skin. It works a lot like a radiator in a car.

Once the heat is brought to the skin it is transferred to the environment in four different manners: convection, conduction, radiation and evaporation. Convection occurs when heat is lost to a fluid that surrounds the body, such as air or water. When you ride a bike convection increases when you ride faster or when the wind blows at you harder. The rate of heat loss on a cross bike will tend to be less than on a road bike, because the speeds are lower. Conduction is heat loss that happens between two solids that are in contact with each other. In cycling this heat loss happens with anything that touches the skin (e.g. handlebars). Radiative heat loss occurs when surrounding objects have lower surface temperatures than the body. This type of heat loss is independent of the movement or the temperature of the surrounding air. In cycling we mostly think of heat transfers through radiation in terms of heat gained. Think about two rides at the same air temperature but one ride is at night and the other ride is during the daytime. The ride during the day will feel warmer because of the radiative heat gain from the sun. The last method of heat loss, evaporation, is what most of us think of when we think of heat loss from the body. It is the most important manner of heat loss when air temperature exceeds that of the body.

It is important to note that even though it is critical for the body to dispose of excess heat during exercise so it can perform well, the actual act of removing waste heat, is itself, potentially detrimental to performance. When heated blood is pumped to the skin to allow for cooling there is a drop in blood pressure. This drop in blood pressure causes the heart rate to increase even if the amount of work being performed by the athlete has not increased. This effect is called cardiac drift and can have a negative impact on VO2 max (the highest level of oxygen that can be consumed) and levels of work output relative to heart rate. Decreases in performance during heat dissipation can also occur when we increase our rate of evaporative heat loss by sweating more. Sweating causes us to lose body fluid, which in turn decreases plasma volume and blood pressure and, again, causes an increase in heart rate when the amount of work has not increased.

The fastest performances occur at ~50 °F, but obviously varies depending on the individual and sport. As temperature increases beyond this optimum, performance slows exponentially. This decrease is likely caused by the negative effects heat has on many of the body’s systems- the detrimental effect that heat has on the cardiovascular system described above being one of them. It can be reasoned that much of the negative effects of the body’s response to heat production can be negated when an athlete exercises in colder temperatures. This is due to the fact that heat transfer to the environment becomes easier when there is a greater thermal gradient.

Other factors that one can assume are equally important in determining an individual’s ability to thermoregulate, but not as readily considered, are a person’s surface to volume ratio and the exercise intensity they can maintain at length. The concept of surface to volume is a predominant theme in nature and physiology. It deals with how much heat generating metabolic tissue (volume) one has vs. how much area one has to lose that heat (surface). The best way to conceptualize this is to think in terms of two cubes. A 1 x 1 x 1 cm cube has a total surface area of 6 cm2 and a volume of 1 cm3, which is a 6:1 surface to volume ratio. On the other hand, a 2 x 2 x 2 cm cube has a total surface area of 24 cm2 and volume of 8 cm3, which is a ratio of 3:1. The 1 x 1 x 1 cm cube has twice the surface area per unit of volume! If both cubes were producing the same amount of heat per volume unit, the smaller cube would be able to cool itself quicker because of its superior surface to volume ratio. In terms of athletes, if we have two individuals, both weighing the same and having the same percent body fat and one is short and stocky while the other is long and lean, the long and lean athlete, in theory, should have a better ability to dissipate heat. Surface to volume ratios are also something to be considered with parts of the body as well. Fingers, toes, ears, arms, and your head all lose heat faster than your core and much of this is because of their surface to volume ratio.

Besides how much metabolic tissue an athlete has to do work and generate heat, the intensity an athlete can exercise at also factors into their overall thermoregulation scheme. If we again look at two athletes, this time the same in every way except for the amount of power they can maintain over an hour, say one can hold 200 watts, while the other can hold 300 watts; the fitter athlete that can maintain 300 watts will produce more heat. This is because the person riding at 300 watts for an hour is doing more work and burning more calories (remembering that 20% of a calorie burned actually does work, while the remaining 80% is lost as heat energy). In turn, the athlete exercising at an intensity of 300 watts would have to wear less clothing than the athlete exercising at an intensity of 200 watts if they are riding at the same temperature.

As with exposure to extreme heat, exposure to cold temperatures can lead to acclimatization by individuals. Fortunately, for athletes traveling to cold climates from warm climates, this acclimatization seems to have a far less impact on performance than the inverse situation and heat acclimatization. Basically, athletes who have acclimated to the cold are going to be more comfortable (shiver less, etc.) when they are not exercising and standing around before and after their race, but I have yet to see anything that says that once exercise begins and athletes are warmed up, an athlete acclimated to cold conditions will perform better than one not acclimated for cold.

About Jason Boynton
Jason Boynton M.S. is an exercise physiologist, medical researcher, USA Cycling level 1 certified coach, and elite level cyclist. His educational background includes a Masters in Exercise Physiology from Eastern Michigan University and an honors degree in Cell Biology & Physiology from UW- Whitewater. During his masters degree he studied under Associate Professor and USA Cycling Faculty member Stephen McGregor. Applied science, critical thinking, and skepticism are the bases of his coaching methodology. As a researcher, he started working with trained endurance athletes in a lab setting in 2005. This has given him extensive experience and insight working with athletes above and beyond coaching. Jason recently accepted an international scholarship to an Exercise Physiology/Sports Science PhD program at Edith Cowan University in Perth, Australia. Find out more at www.boyntoncoaching.com.
#CYCLING#CYCLOCROSS#ROAD