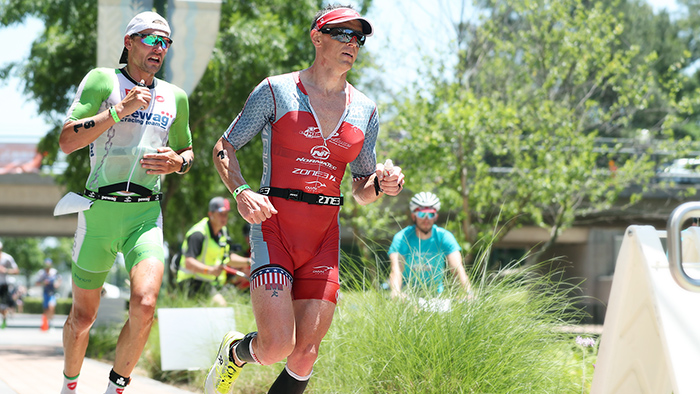 We sat down with 2018 IRONMAN Texas champion Matt Hanson to ask about his new world record, his thoughts on the controversial race and to get a look at that impressive 2:34 marathon run file.

The 2018 edition of IRONMAN Texas was as eventful as they come, with the bike course being cut short two miles before the race began and officials being pulled from the bike course thus creating major drafting in the age group race.

IRONMAN was blasted by participants and spectators for both the shortened course and the large amounts of drafting in the age group race, causing officials to originally discredit all course records before swiftly reversing their decision in the days following the race.

Hauschildt would eventually topple Chrissie Wellington’s 2011 IRONMAN female record, winning the race in 8:31:05, while Hanson would knock out a new IRONMAN men’s record (smashing Tim Don’s 2017 IRONMAN Brazil time of 7:40:23) in a time of 7:39:25—thanks largely to a blazing fast 2:34:39 marathon, much of which he ran neck-and-neck with eventual runner-up finisher, Ivan Tutukin.

We sat down with Iowa-native Hanson to talk about his thoughts on his win, his training for this particular event, and how he kept his cool while holding a sub-6-minute pace for 26.2 miles.

Check out Hanson’s IRONMAN Texas marathon file by clicking here or on the image below:

Susan Legacki: When that starting gun went off the morning of IRONMAN Texas, was a new world record time your goal, or was it a surprise?

Matt Hanson: I don’t race with a time goal in mind typically. When the gun goes off, all I am focusing on is executing the game plan and putting myself in a position to have a chance to go for the win the last 10K of the day.

Of course, I knew the course was a fast course, I put up a pretty decent time here in 2017. I didn’t look at the total time of the day at all before I got to the finish shoot. I had heard a few people on the course mention that it could be possible, but I really wasn’t focusing on that at all. I was focusing on the battle with Ivan (Tutukin) and making sure I didn’t screw anything up. I guess you could say the overall time was a happy surprise at the end of the day.

SL: You have done IRONMAN Texas several other times, so you were already very familiar with the course. Can you tell me a little bit about your race specificity training for this year’s race?

MH: This was my sixth time at IRONMAN Texas. For an early season race, it suits me quite well being it is so flat. I am training out of Iowa, so over the winter I am on the trainer on the bike and do a lot of treadmill running. So it is easy to mimic this course on both of them.

I went down to Texas on April third to race Galveston and stayed through IRONMAN Texas hoping to get some hot days to train in. Unfortunately, we got a lot of PERFECT training days! So I had to continue doing some sauna sessions and over dressing for a few workouts in order to be prepared for the heat if it happened to show up on race day.

SL: Do you have any benchmark workouts to monitor your IRONMAN race-readiness?

MH: I’m really not a huge believer in benchmark workouts to show you if you are ready for the race or not. To me, the entire build is a benchmark. One workout doesn’t tell you if you are ready or not, you should gain confidence in executing your workouts day in and day out during the build. I really don’t have any workout that I repeat over and over again to monitor progress.

SL: Can you tell me a little bit about how you felt on the bike? I know the age groupers and some of the female pros experienced a fair amount of packs, but the men’s pro race did not seem to be affected. Were you aware of it while the race was going on?

MH: I was pretty focused on my race while riding, but on the second loop I was definitely passing some pretty big groups. I remember thinking a few times that there is no way these guys are riding legal, but it wasn’t something I was really focused on.

In multiple loop races, there is a huge speed differential between us and the people on the second loop. The lines people take are not always predictable and the aid stations can be a nightmare. For the most part I was focusing first on staying safe and on keeping the power down hard on the pedals.

SL: You and Ivan Tutukin ran neck and neck for basically 26 miles straight. You have written in your own post-race report that you don’t think you could’ve run a 2:34 without battling alongside of him. Can you tell me a little bit about what that was like and what types of particular mental training you had to tap into?

MH: I do a lot of visualization while I am running, especially on the treadmill over the winter months. I know the IRONMAN Texas course very well; I’ve done quite a bit of running on the course and raced there a number of times. So I can picture exactly how the course looks and essentially “put myself on the course” while training.

I’ve pictured myself making a surge at the exact spot I did a number of times. So you would think that I would be able to be 100 percent confident the entire run. Unfortunately, I can’t lie and say that this was the case. There were some tough times out there where I didn’t know if I was going to be able to hang on.

I’ve talked a lot about this with Coach Julie over the last months. Everyone goes through tough times, that’s where you have to control the only thing that you can … your attitude. Whenever doubt started to creep in, I had to work to push it out.

Mile 24 was a mental struggle for me, but I was able to push through it and find a way to gain the confidence that I needed to make the surge when I did.

SL: Slight variations in course lengths are actually not unusual, and are generally made for safety reasons. That said, do you think IRONMAN did the right thing in allowing your world record time to stay?

MH: I think that IRONMAN either needed to accept the record or get rid of records all together. I actually took quite a bit of flack from my fellow pros for not fighting openly right away. I tried to toe the line and not feed the controversy (maybe I left all of the fight I had in me on the course!).

I think there are a lot of courses with some level of variation; whether it is a wetsuit legal, current assisted, moto paced on the bike, net down hill point to point, or a bit short. At the end of the day, the race is classified as an IRONMAN.

If you take the record away, you are telling everyone who completed the course that they are essential NOT IRONMAN finishers. Regardless of whether you agree or not, IRONMAN made the decision that the course is within variance so the record will count. That means the record is attached to me, so I might as well own it. If you feel the need to put an asterisk by it, be my guest.

SL: As a pro triathlete in the spotlight at the moment for both a world-record performance and the controversy around the race organizer’s running of the race, how are you feeling overall and how does this additional stress/excitement/frustration play into your own recovery and current training?

MH: Winning a big race always makes recovery a bit more difficult. This one has been a bit more stressful than typical. Thankfully, winning a regional championship gives me control of my schedule from now through Kona.

I’m able to take a week of just getting caught up with everything, decompressing, and slowly getting back into a routine. Everything is coming back into place and I’ll be back to full training next week.

About Susan Legacki
Susan Grant Legacki is the Content Director at TrainingPeaks. The founding editor of LAVA Magazine and a former editor at Triathlete Magazine and Inside Triathlon, Susan is an IRONMAN finisher, Boston Marathon qualifier, USAT Level 1 Triathlon Coach and certified Pilates instructor. When she's not editing or writing copy about endurance sports, you can usually find her training for them around Boulder, Colo.
#DATA-ANALYSIS#INSPIRATION#IRONMAN#PERFORMANCE#TRIATHLON