The first time trial of the 2016 Tour de France will feature several rivals battling for the win, and the General Classification riders fighting for time. Ryan Cooper, Chief Scientist of Best Bike Split, modeled out the power, speed, and other metrics that riders may produce for this stage.

The day after ascending Mont Ventoux, the Tour de France sees the first time trial stage. Called the “Race of Truth” each rider will set off to ride the 37.5km course on their own. On this stage, General Classification contenders like current race leader Chris Froome, Nairo Quintana, and Richie Porte will battle to stay in contention. Time trial specialists like Rohan Dennis, Tom Domoulin, Tony Martin, and Fabian Cancellara will be looking to take the stage victory.

The first individual time trial of the tour comes the day after riders were faced with the daunting summit finish up the Hors Categorie Mont Ventoux. There will be no rest for weary legs as the 37.5km time trial features an immediate 7 km climb up the Côte de Bourg-Saint-Andéol which tops out at 409 meters. The pure time trialists will make the most of the next 13.5km as the road flattens out through the second time check at Les Arredons before starting a steep descent down the Col du Serre de Tourre. At 25km the road flattens back out hitting the third time check at Le Pont-d’Arc. With 4km to go, the gradient kicks back up to 6 to 7 percent before leveling off a bit to 3.5 percent for the last kilometer.

The race plan generated by Best Bike Split shows the power, speed, and other metrics that a rider with a 400 watt Functional Threshold Power (FTP) and CdA of .235.

One aspect of the time trial that doesn’t occur during a normal stage is that the weather can change drastically between the first and last rider. Early riders experiencing a certain wind speed and angle could be at an advantage or disadvantage to later riders who could experience quite different conditions. Because of this the overall contenders will start close to each other, but the weather and conditions could play into the stage win.

Analyzing the forecasted conditions from the beginning of the race versus when the GC riders will go off shows that fortunately for the all of the riders conditions over the entire day appear very steady. Unfortunately for the riders there they will be battling strong cross winds in the first 20km of the race. After the descent riders turn northwest and will face more of a head wind into Vallon-Port-d’Arc. The flat cross wind sections from 7 to 13km will favor the big power riders while the flatter headwind sections from 25 to 30km will favor riders with great aero positioning and a low CdA.

The trend in the Grand Tours lately seems to be fairly complicated time trials where teams and riders have to decide whether to exchange bikes along the course. We have examined this to see what type of time gain you could expect to gain on a road bike in the initial 7km versus a time trial bike. The real disadvantage is weight but some riders who do not train on the time trial rig often will feel a bit less comfortable and could produce a bit less power. Once riders crest the top of the initial climb the road bike will be a huge disadvantage. Especially in the expected cross winds. Below, we have broken down the time differences riders could expect between the two bike options along the course.

Typical bike exchanges take around 15 to 20 seconds (plus the loss of momentum) so the 25 second gain using the road bike for the first section is on the edge of where it makes sense. Our climb analysis assumes riders will be out of aero, if riders can maintain aero position in this section the difference will be much closer at only a 5 second advantage for the road bike. 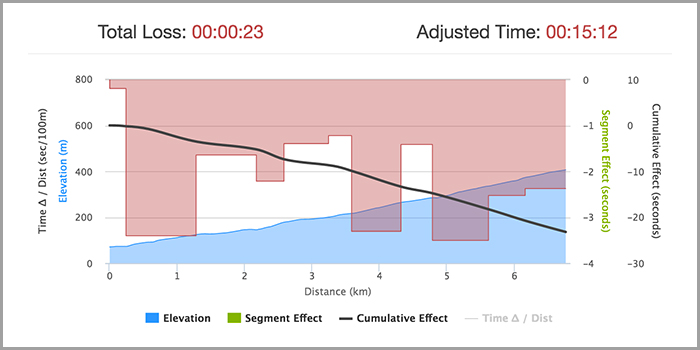 The nature of the course lends itself to a real test for pure time trial riders and GC contenders, as it has a little bit for everyone. On paper it sets up really nice for someone like Froome, Dumoulin, Martin, or even Porte who has a great time trial and triathlon background. The potential big cross wind on the flatter sections will favor the bigger power riders like Cancellara, but the hills might prove a bit too much for the win today.

That same wind could cause some serious damage to Quintana who cannot afford to lose too much time to Froome, who has a nice mix of high power/weight ratio as well as high raw power values. Froome has proven with his performance that he has no qualms about attacking the descents where other GC riders have been a bit more hesitant. In the end though we go to the models to give some insight into what we think could happen. 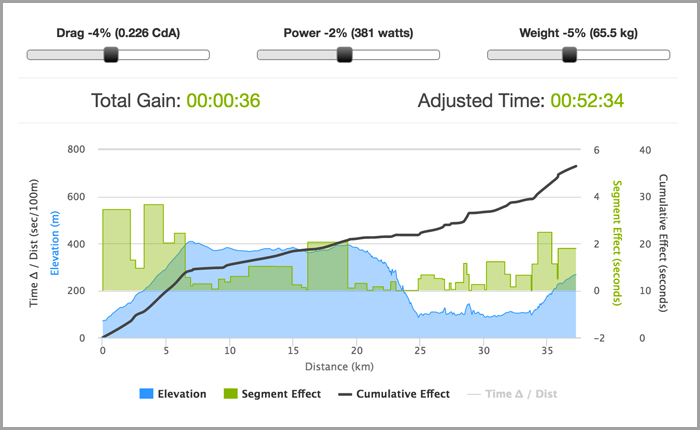 Most of the top time trialists and GC riders will be close, though Quintana without the raw power will have some work cutout for him and will have to push the climbs to minimize time loss. The following are some fun time estimates based on previous TT rides. The lighter TT specialists in Dennis and Dumoulin should have the advantage but the analysis we did assumed the same weather which could change throughout the day. Froome will most likely know the time he needs to beat so that motivation for Yellow to win the stage might give that little extra bit of power to drop the time out on course.

A quick caveat to note is that these are based on previous time trial results for the year or previous years.