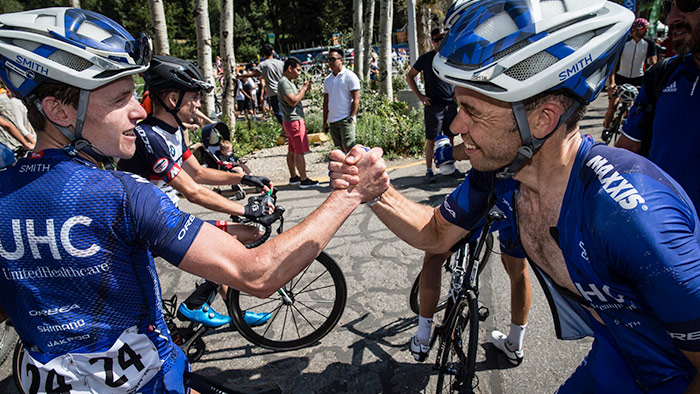 A look at what it took for UnitedHealthcare’s Gavin Mannion to finish second in the GC at the 2017 Tour of Utah.

The General Classification of the Tour of Utah was played out in two distinct phases. The first phase was the mountain top finish and the individual time trial of stages 2 and 3.

Click on the image below to see Gavin Mannion’s Stage 6 power file:

With 2,288m (7,500ft) of elevation gain, UnitedHealthcare’s Gavin Mannion, lying second overall, needed to be attentive and on good form in order to hold his position from the lower places lined up just seconds behind him, as well as to look for opportunities to attack race leader Rob Britton.

The race was on from the gun with a large breakaway getting away early, putting pressure on the race leader. On the first climb of the day, American Fork Canyon, there was only a small select group left by the top including Mannion.

He averaged 304 normalized watts for 37 minutes up this climb, which equates to about 5.2 W/Kg, mostly staying out of trouble except for at one point he was involved in a crash and ended up lying in a ditch!

With catlike reflexes, Mannion got up again (and the UnitedHealthcare Pro Cycling director started to breathe again) and he quickly chased back to the front group.

What was left of the peloton then made its way full gas through the valley, chasing down the breakaway before the final climb up Snowbird.

This was to be where the race was decided. Two Italian riders from the Bardiani team took the first and second places on the stage, but the GC battle was fought behind them with just four riders left to contest the overall win.

You can see from Mannion’s Pioneer file on TrainingPeaks that the first three quarters of the climb was fast, steady and sustained. With just a handful of contenders left at this point, these riders then went into attack mode, launching attack after attack at each other to see if any of them had weak legs.

Mannion’s climb up Snowbird took 32 minutes at an average of 312 altitude-affected watts (5.3W/Kg), with many power spikes in the last 20 minutes to finish fourth on the stage and hold on to his second overall in the General Classification.

The final stage 7 was an 11-lap circuit race in downtown Salt Lake City finishing up a steep pitch. The race, as it had been all week, was aggressive with many attacks throughout with many stage-hunting opportunities trying their hand.

Click on the image below to see Mannion’s Stage 7 Power File:

The week at the Tour of Utah is a tough one, and Gavin was happy to finish second overall in the General Classification behind winner Rob Britton. Over the 26 hours and 23 minutes of racing, he burned 16,800kj, pedaled over 1,000km and climbed 12,291m—that’s one and a half times up Mt Everest!

Congratulations to Gavin Mannion on his great Tour of Utah!

About Ben Day
As founder and head coach of DaybyDay Coaching, Ben Day brings his 20+ years of experience racing professionally and coaching of athletes, from beginners to the World Championship level, cyclists and triathletes. With success across an international stage, Ben and DaybyDay Coaching is focused on helping athletes achieve their optimal performance utilizing scientific knowledge, real world experience truly at all levels and strong connections with our athletes. Inspired by a desire to deconstruct the experience garnered from a professional career and scientific knowledge gained through education, DaybyDay Coaching was created to share this knowledge and help endurance athletes achieve their goals. Currently, Ben is preparing his riders for the Tour de France.
Visit Ben Day's Coach Profile
#CYCLING#DATA-ANALYSIS#PERFORMANCE