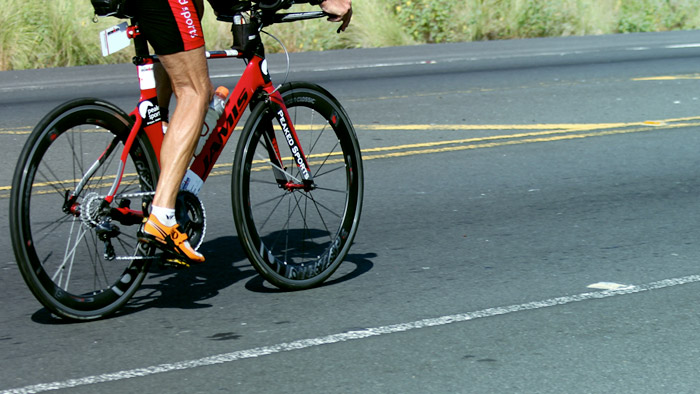 Research shows that as athletes age, their aerobic and anaerobic capacity decreases, even in highly trained athletes. Coach and author Joe Friel suggests that to minimize your loss of fitness you should mix up your training to add more anaerobic work. Learn more about this concept and how this slight modification may lead to retaining your fitness longer.

In the last couple of years, I’ve been thinking a lot about periodization of intensity. It started when I was reading research on the aerobic capacity declines common in 50+ year-old endurance athletes for a book I was writing- Fast After 50. But research also reveals that even highly trained endurance athletes over the rather youthful age of 35 lose both aerobic and anaerobic capacity at an average rate of about 8 percent per decade. Why does it decline so rapidly even in these younger athletes?

In digging into the research a little deeper, it appears that the decline is most rapid in those who seldom challenge their anaerobic systems. They do a lot of Long Slow Distance (LSD) training. I realize that’s not a very happy message to read as you’re in your Base period doing lots of LSD riding. Not doing anaerobic workouts at all for several weeks means you will lose anaerobic fitness and then have to devote a significant amount of time to rebuilding the related systems once you move beyond the Base period.

It appears that up until about age 35 fitness above the anaerobic threshold is maintained with little need for focused training. But that changes with age. At first these declines occurring after about age 35 are rather small, but the older you get the greater they become.

The research also suggests that adaptations in the “peripheral” muscles that propel the athlete in his or her sport (for example, the legs in running) ultimately have a greater impact on race performance than do “central” adaptations (for example, the heart, blood, and lungs). Yet endurance athletes have traditionally focused their training in the Base period almost exclusively on central adaptations.

There’s nothing wrong with doing a great deal of that as there are, indeed, fitness benefits that still occur peripherally with such training (for example, greater capillarization of the primary muscles of the sport). I’m notoriously well known for having athletes do lots of aerobic threshold work in the Base period. The problem is that completely avoiding anaerobic training during this long period of training promotes a loss of much of one’s peripheral muscular power.

Mixing Up Your Training

I propose that the way to prevent these seasonal declines is to do what might be called “mixed” training throughout the year regardless of the period. If you’ve been following a rather traditional, linear periodization plan it’s really not a big change. You only need to add a few minutes of such high intensity intervals per week in your base period to maintain your anaerobic and aerobic capacities.

Let’s take a look at what that may entail when it comes to Base training starting by dividing training intensity into three rather broad zones (note that this is not the common intensity breakdown which usually involves 5 to 7 zones).

Using these three zones, how might an athlete allocate his or her workout intensity over the course of a season using a mixed training concept? The following table provides an example of a mixed, time-by-zone distribution in traditional, linear periodization for a hypothetical athlete.

Please understand that this is just an example for an advanced, fictional athlete who we otherwise know nothing about—gender, age, sport, race type, limiters, or anything else. In other words, it’s not intended for you to incorporate exactly into your training. It’s only an example for a proposed concept. The concept is the main point—not the numbers.

Let’s look more specifically at zone 3 in the second table. In the General Prep (Base) period our imaginary athlete is averaging only about 3 percent of his or her training at or above the anaerobic threshold. Such a workout in this period calls for very brief but very high-intensity intervals. To add some level of detail, let’s say the athlete trains 10 hours in a week. So what this means is that the standard zone 3 workout in Base may be something such as 3 sets of 4 to 6 x 20 to 30 seconds ranging in intensity from 100 percent to 150 percent of Functional Threshold Power (FTP) with 20 to 30 second recoveries between intervals and 2 minutes between sets. This may be done once weekly with another weekly session of 3 x 4 minute work intervals with 1 minute recoveries done at FTP. These aren’t terribly hard workouts but they are laying the foundation for some harder anaerobic training to come- and are helping to maintain peripheral muscular power.

In the Specific Prep (Build) period the athlete is doing 10 percent of weekly training in zone 3. This is when anaerobic training typically starts in a traditional, linear periodization plan. Only now the athlete doesn’t have to slowly start from scratch to allow for a lengthy adaptation to high intensity after several weeks away from it. This allows the intervals to become more challenging almost immediately.

Should you train with a mixed intensity distribution year round? I can’t say for certain, but my inclination is that there is something to at least consider here. The problem is, of course, that just as with all periodization concepts the answer to the question, “Did it work?” won’t be known until serious racing begins several months later.