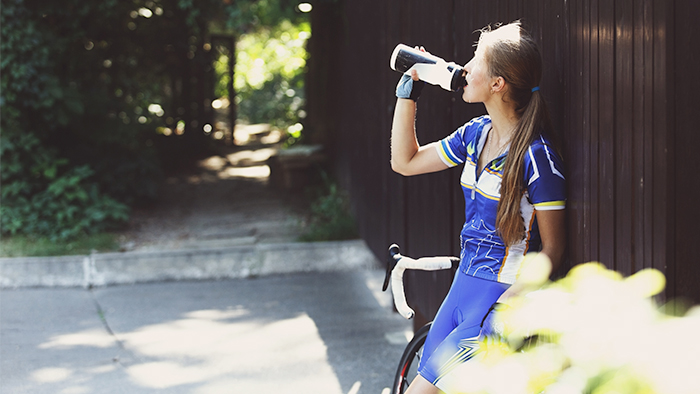 How to Optimize Your Recovery by Hydrating Properly

When you are in heavy training, you need to pay extra attention to your fluid and sodium intake post-exercise in order to recover properly and prepare for your next workout.

I came across an interesting article recently titled Exercise Increases Salt Preference in Humans. The headline caught my eye because when I was training heavily for IRONMAN I always used to absolutely love putting loads of salt on my food.

The study showed that people who’d engaged in sweaty exercise tended to (subconsciously) prefer eating saltier soup than a non-exercising control group in the hours after their workout. The control group’s salt preference was much lower and more consistent.

This result tallied with my own experiences. I used to find time to do well over 20 hours a week of training, however these days it’s more like five (if I’m lucky). Since I’ve backed off on mileage, I’m quite a bit less inclined to be liberal with the salt shaker and the study offers a clue as to why that might be.

This got me thinking about the broader role that sodium and fluids play in helping with recovery from hard sweaty exercise.

It’s all a balancing act.

Recovery from exercise has a lot to do with homeostasis. Homeostasis—in case high school biology has long since been wiped from your memory banks—is defined as “the tendency of the body to seek and maintain a condition of equilibrium or stability within its internal environment when dealing with external challenges.”

Many critical attributes within our bodies are controlled homeostatically, core body temperature and blood pH levels being two of the better known examples, with body fluid balance being another that is tightly regulated this way. And this last one is of specific interest to athletes.

Your hydration status is primarily balanced via something called a negative feedback loop.  A small part of your brain (the hypothalamus) is constantly, subconsciously monitoring your blood volume/blood pressure and the relative saltiness of your blood to get a gauge on how much water and salt you have on board in your extra cellular fluid (ECF) compartment. It’s important to understand from the get go that both blood volume and sodium levels are critical when talking about hydration status, it’s not just about water.

In day-to-day life, your blood volume starts to drop when you lose fluid to the environment (through breathing, peeing etc.) and the hypothalamus detects this drop in pressure and the increase in the sodium concentration of the blood at the same time. It takes two main courses of action to remedy this situation:

These two interventions make your blood volume go back up and your sodium concentration drop back down, so your brain stops signalling for the release of the “I’m thirsty” and “I should pee more” hormones and everything returns to normal. This process repeats on a neverending loop.

The disruption of sweating.

One of the biggest problems with being an athlete is that it involves doing quite a lot of sweating (if it doesn’t, you might not be doing it quite right). If you’re working hard (or the temperature is high enough) sweating can have a pretty dramatic and disruptive effect on your body fluid and electrolyte balance in a short space of time.

To put the effect sweating can have into context, during a “normal” day when you don’t exercise and you’re in a temperature-controlled climate, the amount of water you lose through breathing, peeing etc. could be as low as about 1.6l (56 oz.) a day. But as soon as you start exercising, this all changes pretty quickly.  The average adult sweat rate is around 1.2l (40 oz.) per hour and this can climb as high as 3.5l (120 oz.) per hour for fit athletes working hard in hot climates.

It’s easy to see that even a few hours of training can double, triple or even quadruple your daily fluid turnover. If you’re smashing out a really big day of training, or competing in something like an IRONMAN or an ultramarathon, your accumulated sweat losses can be massive.

In fact, in one study of American Football players during pre-season training, researchers found that the average daily fluid requirement to maintain a healthy hydration status in the players was 12.2l (2.7 gallons), with one particular athlete needing an insane 19l (4.1 gallons) a day just to stay properly hydrated!

Fluid loss isn’t the only thing to consider when we sweat a lot either. There’s a large amount of sodium in your sweat, so there’s a need to proactively replace sodium as well as fluids when your sweat losses start to get quite high. The exact amount varies considerably from athlete to athlete, which is why learning your sweat rate is so important.

What goes out must come back in (at some point).

There’s a fair bit of controversy in sport and exercise science about exactly how much (and what) athletes need to drink in order to maximize performance when they’re sweating. There’s not an easy, one-size-fits-all rule that can be applied to all athletes in all situations.

However, what most experts can agree on these days (for the most part) is that prolonged exercise nearly always ends up in some level of uncorrected dehydration. People rarely drink enough to replace 100 percent of their sweat losses (and they probably shouldn’t try to) and, as a result, post exercise rehydration is extremely important because this is when the body is best placed to rebalance its fluid and electrolyte levels.

All of your sweat losses (both fluid and sodium) need to be replaced at some point if your recovery is to be considered complete. And a complete recovery is essential before you go out again, that’s if you want to perform at your best. If you don’t fully recover, it’s highly likely you’ll run into problems when you try to dig deep.

How to rehydrate properly during your recovery.

The best way to go about rehydrating after exercise is basically dependent on two key things:

When sweat losses are low.

When your sweat losses have been fairly low (as is the case after many standard training sessions) and when you don’t need to perform again for a while, simply drinking and eating normally is usually enough to replace all of the fluids and electrolytes you lost.

Homeostasis stimulates you to drink to satisfy your thirst, you get a bit of sodium from your food, and your body does it’s rebalancing act with what you consume and pee out. Before you know it, everything is back to normal.

When sweat losses are high.

However, when your sweat losses are high, or you have to restore fluid balance rapidly because you’re exercising again later in that day, a more proactive approach to rehydration may be needed to help your body restore equilibrium in a short space of time.

Fortunately, this has been the subject of a lot of research over the years. The scientific consensus is pretty clear and summarised nicely in a comprehensive review of all things hydration written by Asker Jeukendrup and Lindsay Baker in 2014. They concluded that if you want to rehydrate quickly in a situation where you have become quite dehydrated, or you need to be back in top form again very soon, then you need to drink about 1.5 times more fluid than you have lost, and you need to make sure there’s plenty of sodium either in or with the fluid to account for the salt loss too.

The reason you need to drink so much more than you sweated out is that you inevitably end up peeing some of it out (and perhaps continued sweating after you finished exercising). Your drinks need lots of sodium in them to prevent your blood sodium level dropping too low, which, according the the negative feedback loop, would cause your kidneys to significantly ramp up urine production, negating the effects of putting the fluid back in in the first place!

Experience has taught us that drinking fluids containing sodium can also help if you’ve ever had the misfortune of cramping up during the night after an intense workout.

That study showing that we prefer to eat saltier soup in the hours after sweaty exercise illustrates the clever tools your body has at its disposal to maintain homeostasis. It has the ability to shape your behaviour in ways that help it achieve equilibrium. This includes the ability to make you thirsty when water levels get low and to crave salt when sodium levels are compromised.

With that in mind I believe that as well as understanding the theories behind how and why to rehydrate effectively to aid your recovery, it’s also crucial to listen to your body and pay attention to what it’s trying to tell you. That way you’re most likely to give it what it needs and you can leave it to homeostasis to sort out the rest.