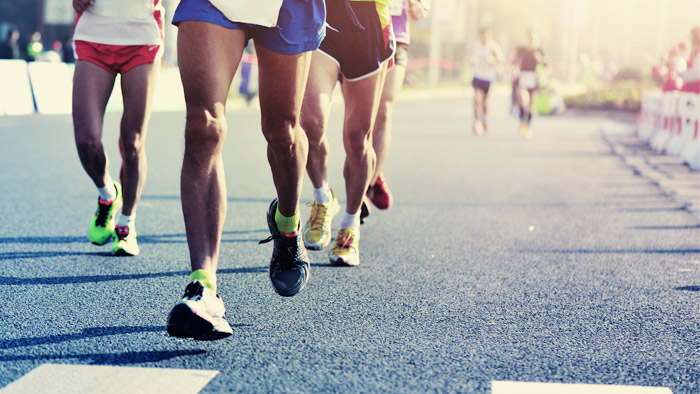 Marathon Training and The Power of Self-Belief

Beyond the hours spent training, believing in yourself can have a big impact on your marathon performance. Use these tips from John Hampshire to make sure you stay positive and can reach your full potential on race day.

The spring marathon season is almost upon us. There are obvious things like training well and making sure you are well rested, well fuelled, and physically ready on the big day. There are other very important factors that will help you get the best out of yourself and perform to the best of your potential.

I got to thinking about the countless hours I have spent running with John Graham, winner of the inaugural Rotterdam Marathon in 2:09:28, and what I gleaned from the many stories he told whilst we were running and socialising. I think the thing that really struck home was his self belief during those training sessions that always ended up with the pace picking up to a sprint finish along the street to his house. I never dropped him but I know I was fitter than him on a number of occasions.

It was a few years later that I started to understand what he had over me. I passed him in a cross-country race and said, “Come on John, I thought you always raced to win”. He responded by saying that he had to believe he could win for that to happen, he didn’t believe on that day and I beat him. I realise now that in those two hour runs, he believed he could and would beat me, and so he did every time, even on the few occasions when I was stronger.

Believe in Yourself to Increase Your Chances of Success

In his excellent book, From Last to First, Charlie Spedding changes his approach to his sport, commits to success, and runs well beyond what should be his potential on a number of occasions. The book starts with, “Talent is the key to high performance, or so you might think. I won a bronze medal in the Olympic marathon, but I was definitely not one of the three most talented distance runners in the world”. Charlie won the bronze medal in Los Angeles and went on to represent Great Britain in the Seoul Olympics four years later, overcoming many debilitating setbacks. His book is probably one of the best books relating to sports psychology I have ever read.

Charlie’s skill was to get his mind right on the day and when he needed to he thought differently. He found a way to look at things positively and ignore the negative factors he couldn’t change.

Find the Positives and Focus on Them

Finding positives can sometimes be difficult, but it’s very important to reaching your best. What you think can have a great impact on how you perform. Here is an example of how to take a negative thought and turn it around to something more positive:

Which option do you think is likely to help you run well? It’s not difficult is it?

Two factors come out here. First is that being positive is fundamental to doing your best. Secondly, to prepare in the best way possible, don’t give your mind opportunities for negativity.

Get all your kit ready and know the route. If you have time, do some tough sessions to simulate the conditions of the race so you can practice positive thinking when working hard. Learn and think through what you will do on the day: write it down and try it in a minor race. Do this with physical things as well as mental:  write a list of all the negative things you can think of, then all the positives. Memorise the positive ones and create positive ways of looking at the negatives.

While you have likely heard this before, it can not be underestimated. I will use a personal example to illustrate my point.

I went on a trip to do a half marathon with some friends and hadn’t prepared properly due to various injury problems. In fact I hadn’t run more than six miles for maybe a year. I thought about what I could do- run six miles, in around six minute miles. Then I thought, well, a half marathon is just two, six mile races with an extra mile in the middle! It worked and I managed around 79 minutes, having lost a minute on the first mile that was uphill.

In addition to putting in the physical training, having the right mental frame can be a big factor to your race day success. As you train your legs, don’t forget to train your mind.

About John Hampshire
John Hampshire is the owner and founder of JHCoaching. He has more than 30 years experience in training and racing as an athlete and coach. John has helped athletes at every level prepare for and reach their goals in road, trail, fell, and mountain running. He enjoys seeing athletes overcome often debilitating setbacks to exceed what they previously thought possible. Learn more about JHCoaching or ask him a question at johnhampshirecoaching@gmail.com.
Visit John Hampshire's Coach Profile
#MARATHON#RUNNING#SPORTS-PSYCHOLOGY