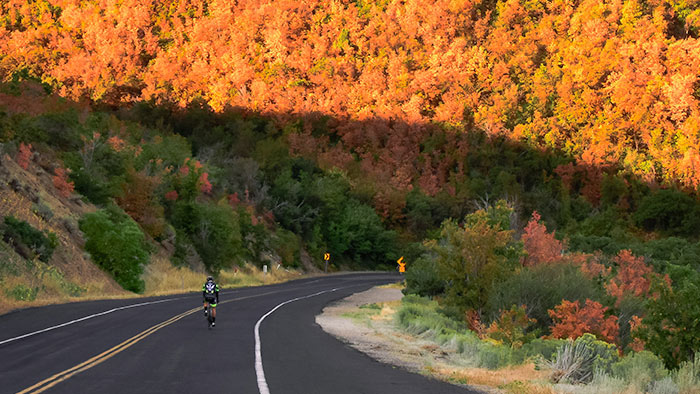 For many cyclists, completing a century ride is a popular bucket list goal. For new riders, the desire is to just get through the ride feeling as good as possible. That first event is often the hook for the next ride – one century was fun, but how do I get faster? And finally, there are riders who are looking to “race” a century, even if it’s not an actual race.

Let’s name the three groups previously mentioned beginner, intermediate and advanced. Now let’s classify riders by speed. These ranges aren’t precise, rather they give us a common reference. Riders planning to average roughly 12 mph to 14 mph are in the beginner group. Riders going 15 mph to 17 mph range are intermediate, and finally those planning to average 18+ mph for 100 miles are in the advanced group.

Looking at the table below, we can see the estimated finish times for a 100-mile ride based on average speed.

With all three groups, consistency trumps all. What that means is steady, consistent training gets you more than periods of no training, followed by binge-training. As you might expect, key workouts for each group are different. Let’s start with beginners.

In the six to eight weeks prior to the century ride, you are aiming to build the duration of your long rides so that the last one is in the four-hour range. This ride needs to be completed between two and three weeks prior to the event. This is the absolute minimum I recommend, even for beginners, and it is important that you complete it no longer than three weeks before your event.

This long ride is best accompanied by at least two other rides during the week. This pattern will get you through the century.

Why four hours for the longest ride? Because I’ve found that if athletes can accomplish a long workout that is between 50 and 80-percent of the estimated time of their goal finishing time, enduring 100 miles is possible.

If you want to be more comfortable during the event, I suggest adding a second ride day next to that long ride. Build the total ride time of the two days to some 80-percent of your overall predicted event time.

For example, if you think your century ride will take around eight hours, then build toward two back-to-back days of riding that total about six and a half hours. You can still do that four-hour ride I mentioned earlier, followed by a two-and-a-half-hour ride the next day.

I’ve found that by combining two training rides in this fashion, average speed stays higher and you can still accomplish endurance goals to have a successful century. If your fitness is low going into this two-day training weekend, keep both rides aerobic (Zone 1 to 2.) If you have what you would consider high fitness, I suggest flipping the days. Do the two-and-a-half-hour ride first, at Zone 1 to Zone 3 intensity. The next day do the four-hour ride at Zone 1 to 2 intensity, which will give you practice riding on tired legs.

See Joe Friel’s quick guide to setting training zones to help you decipher what zones you should be riding in.

As much as practical, make your key rides on courses similar to the century ride profile. For example, if it is hilly, ride hills in training. If you cannot find similar terrain, try some simulation rides.

With intermediate riders aiming for a finish time in the six to seven hour range, there are three key workouts. For this group, you are already comfortably riding at least three or four days per week and your long ride pace averages at least 15 miles per hour. That long ride is at least three hours long.

Similar to the beginner group, I recommend back-to-back riding days on the weekend. Because of your speed, your weekend total ride time two to three weeks out from the century can be up to 100-percent of your expected finish time. For example, a Saturday ride of two to three hours and a Sunday ride of three to four hours.

The Saturday workout is the shorter one—two to three hours. Ride a hilly course, and after your warm-up, aim to ride all climbs at Zone 3 intensity. You’re looking to build strength and low-end threshold speed/power with this workout. Your second weekend workout is the long, aerobic workout. Keep the intensity mostly in Zones 1 to 2. If you have deep fitness and feel good, aim to make one-half to three-quarters of this ride maximizing time in Zone 2. Think “most speed, least cost.”

Your third key workout is a mid-week workout that includes Zone 3 intervals. I like shorter interval times, with short recovery rather than doing 20-minute long intervals. For example, after your warm-up, do five to eight by three minutes at Zone 3 heart rate or power. Take only one minute of recovery after each work interval.

Work backward from the century ride date to now, planning to build the long rides and the mid-week intensity at a rate that reasonably builds fitness and avoids injury.

For this column, let’s assume that the advanced rider is looking to work pacelines during the century event. Your century success depends on your ability to work with other riders. For you, weekend combined ride time will be greater than 100 percent of your expected century finish time.

The Saturday ride remains shorter, in that two to three hour range. After warm-up, this ride is in all zones. Your goal is to work with other riders, while keeping close tabs on your energy output. That means I don’t want you to try to be a hero and do all of the work. If you happened to be the slowest rider in your group, discuss how to minimize your time at the front of the group so everyone can stay together.

If you don’t happen to have a group to ride with, just do a hilly (if possible) ride that includes time in all intensity zones. You’re looking to build on-the-bike strength in addition to training the metabolic system to handle higher intensities.

Like the other groups, the Sunday ride is a long aerobic ride. Similar to the intermediate group, keep the intensity mostly in Zones 1 to 2. If you have deep fitness and feel good, aim to make one-half to three-quarters of this ride maximizing time in Zone 2, aiming for “most speed, least cost.”

Now it is time for self-evaluation. If you think that longer efforts of sustained speed is one of your performance limiters, include five-to-eight sets of three-to-four minutes at Zone 4/5a heart rate or power, with one-minute recovery intervals, as one of your mid-week workouts.

If you think you lose time or get dropped from your group during shorter efforts, but not sprints, then I suggest including four-to-five sets of three minutes at Zone 5b heart rate or power, with three-minute recovery intervals, as one of your mid-week workouts.

Some advanced riders can do both of the mid-week workouts suggested, in addition to the fast Saturday ride and the longer aerobic Sunday ride. Be careful with this and don’t get greedy. Do as much high intensity work as you need to improve fitness and no more. You want to avoid stepping off the cliff of burn-out or injury.

Be sure to keep your fueling and hydration plan on track during the event. Drop me a note and let me know how it goes.

Gale Bernhardt has coached Olympic road racers, triathletes, World Cup mountain bike riders and Leadville 100 racers. Some want to go faster, some want to cross the finish line and others want endurance sport as a lifestyle. TrainingPeaks hosts many of Gale's ready-to-use, easy-to-follow training plans for cycling and triathlon.