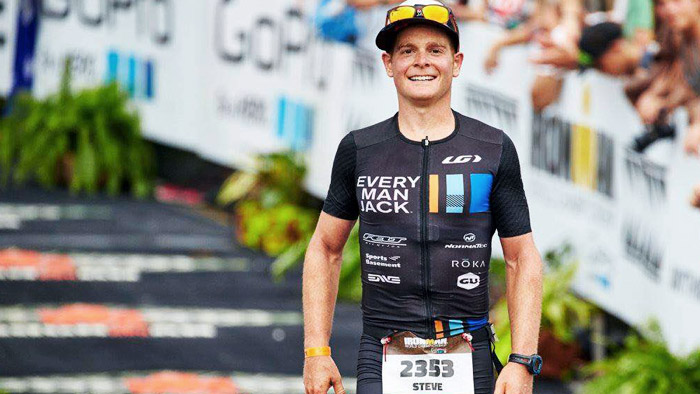 23 year-old Steve Mantell placed 2nd in his age group and 8th amateur overall at the IRONMAN World Championships. View his bike and run data, and get his insights into his strategy for achieving such an amazing result.

Mantell qualified for Kona at IRONMAN Florida in November of last year, his first IRONMAN, and went 8:20:22 (the swim was canceled). He also raced at IRONMAN Boulder this year, where he finished in 8:54:04 placing him 1st in the age group and 2nd overall.

After exiting the swim in 57:51 Mantell found himself surrounded by a lot riders. Wisely, rather than pushing early, Mantell kept his effort under control and stayed focused on his own race. “On the first loop in town, I was passed a lot by people who were going much harder up the hills than I wanted to,” said Mantell. “I was confident in my race prep that I could ride strong for about 5 hours and didn’t want to burn any unnecessary matches in this first part. I frequently was sitting up or using my brakes to make sure I was respecting the drafting zone of those who were cutting in front of me. Instead of worrying about getting passed, I focused on having a higher cadence and controlling my effort so that I could ride strong on the Queen K Highway.”

Displaying an ability to manage all aspects of the race, Mantell realized early that the conditions on the day would also play a big role. “Once onto the Queen K, I saw that there was a distinct lack of cloud cover which was likely going to lead to a really hot day and make things very tough for athletes who weren’t pacing well or focusing on taking in food/liquids or using cooling methods.”

Mantell set up his Kona power plan with the help of his coach Jon Mason of MP Multisport. Performing regular Functional Threshold Power (FTP) tests allowed them to create an optimal racing plan. For Kona, Mantell had a planned wattage range of 220 to 250 watts.

While many would look to break away from a large group, Mantell had his own plan and stuck with it, choosing to remain patient. In his power file, you can see that over the 45 miles from  the Queen K to the start of the climb to Hawi, his Normalized Power (NP) is 223 watts. With an FTP of 300, this puts his Intensity Factor® (IF®) at .74, right where we would expect a strong age grouper to be at. “I tried to just ride my own ride on the way out to Hawi as I saw a lot of people who looked to be pushing much too hard,” Mantell said of his plan. “I knew I had a strong run in me and that I would be able to catch a lot of them there if not on the way back to town on the bike still.”

Along this same section of the Queen K, Mantell put his power out in an even fashion, as shown by his Variability Index® (VI®) of 1.01. This means that rather than surging and slowing, Mantell’s output is even and steady. This is the most efficient way to ride, and a VI of 1.05 or less is the goal for any IRONMAN course.

On the climb to Hawi, Mantell pushed his wattage to 235, still with room for the upper end of his goal. Even with the bump in effort Mantell felt in control and kept his heart rate under 160bpm to help avoid overheating.

Mantell also understood that dehydration was a very real concern over the full day. As he did for his power output, Mantell had a strategy that he continued through the entire ride. “My main goal of the bike was to deliver myself to the run with as little dehydration damage as possible,” he commented. “To quantify this, I knew I needed to keep my heart rate under 160 as much as possible to avoid overheating. I must have gone through 10 to 12 water bottles between drinking and squirting them into my helmet. I slowed down for each aid station to get cold bottles.”

After getting his special needs and making a quick pit stop, Mantell encountered the legendary crosswinds that often wreak havoc on those who have gone too hard too early. With energy still in the tank, Mantell used the rolling hills along the Queen K to gain some time on his competitors. Viewing the same 45 mile section from his ride out, on the way back to Kona Mantell’s power does drop slightly to 216 AP and 221 NP. This is a very minimal drop in power. To go with that, his VI only bumped up to 1.02, meaning he was still very smooth with his effort and did not need to rest on any downhills.

His patient strategy, strength, and good decision making helped Mantell bike a 4:45:32. His overall metrics of an IF of .73 and VI 1.03 are right in the range of what a top age group male should have. But while he had a strong bike, the marathon was still to come.

On the run, Mantell’s patience on the bike continued to pay off. Starting at a 7:00 minute pace, he was confident he could hold that pace. “I rarely looked at my watch to see the pace,” remarked Mantell. “I wanted to run high 6 minute pace and whenever I looked down it was around 7 minute pace so I thought I was all good. I mainly just focused on managing the heat and running steady. I had a good cooling plan in place with ice and used Base salt which worked great.”

Mile after mile, Mantell ran a 7:00 to 7:05 pace despite the heat and rolling terrain. Amazingly, his fastest mile split comes at mile 22 when he ran a 6:54 mile.

To have such a fast marathon, Mantell and his coach decided to focus on quality runs over quantity, especially after racing IRONMAN Boulder in August. “IRONMAN running is more strength than being able to run long distance fast,” says Mantell. “Your body breaks down too much with too much running so we focused on quality running. I did most of my longer runs before IRONMAN Boulder this summer. My coach and I agreed that another 22 plus mile run wouldn’t benefit me.”

Solid training and an incredibly well executed race plan allowed Mantell to close with a 3:04:40 marathon.

Mantell’s race strategy is one that many athletes would benefit from emulating. Having a specific plan in place for each segment, and having the willingness to stick with it no matter what will always deliver the best results. His patience on the bike and gamble that he would be able to run down other athletes paid off in a big way. While many athletes understand this race plan, many fall short in executing it.

Mantell sums it up best by saying, “The best ride I can do would have been faster, but triathlon isn’t about having the best swim or bike or run split, it is a combined swim-bike-run sport with one sport coming after the other.”

About TrainingPeaks
The staff at TrainingPeaks includes passionate athletes, coaches, and data enthusiasts. We're here to help you reach your goals!
#IRONMAN#TRIATHLON