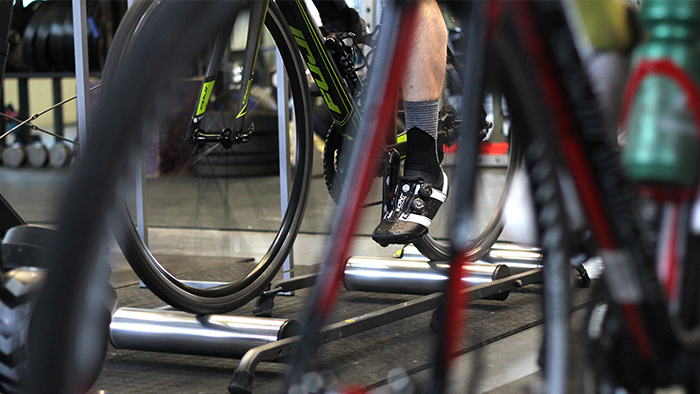 Maybe winter hasn’t quite left your neighborhood, or maybe you just need to squeeze in a solid hour without leaving the house or lugging your bike onto the car. We get it. Here are some solid indoor MTB workouts guaranteed to give you the focus and specificity you need (minus the mud).

Often times, indoor or trainer workouts are most closely associated with road riding. The thinking tends to be that for off-road athletes to be successful, they have to perform all of their workouts on the trail. That’s simply not the case.

In fact, mountain bike athletes can see tremendous gains from the focus and specificity that indoor workouts provide. The ability to hone in on the nuances that make racing and riding off road exciting will also produce substantial fitness gains for those looking to improve in the discipline.

We’ll take a closer look at some of those nuances and review some examples of the types of indoor workouts that can help athletes prepare to be more successful off road.

More often than not, MTB races include some form of climbing. Depending on the terrain, and the geographic location, climbs could range anywhere from a few minutes to a few hours. Below is an example of a workout that will help to prepare the body for climbs anywhere in the five to 20 minute range. The first two minutes of the main set should be completed standing at 120 percent of Functional Threshold Power (FTP), then perform the following eight minutes seated at 97 percent of FTP. Intervals can be added as fitness increases.

There are a few areas that this particular workout helps to bolster. One is building muscular strength to be able to produce efforts at, or just below, FTP.

This is a valuable area to focus on for all riders, and climbing is just one area where it’s important. The structure of this workout encourages FTP gains, as well as develops the anaerobic system when energy from that source is needed. Working on maximum aerobic power and the ability to draw from both the aerobic and anaerobic systems is critical in the development of a mountain bike racer.

Not every feature on a race course is a long, epic climb. Sometimes a course consists of relentless rolling, or “punchy” hills that can wear even the most seasoned rider down.

Short, high-intensity efforts lasting five minutes or less are also worth preparing specifically for. Even on big mountain courses, the developments from a focus in this area will prove worthwhile. The following workout will help prepare the body for the demands of these short maximal efforts.

After a warm up the workout focuses on sub-threshold work with a series of progressive surges mixed in. The first set is to be performed by riding for two minutes at 92 percent of FTP and then surging for 30 seconds at 110 percent of FTP.

Then after a short recovery period the next set builds on the first by calling for three minutes at 95 percent of FTP with 30 second surges at 115 percent of FTP. The goal is to try and do at least four of these surges per set, increasing as fitness is gained.

The focus on supra threshold efforts helps to develop the body’s lactate clearing potential in which the body is able to process lactate as fast as it’s produced. When this occurs it allows the body to continue to absorb calcium at an appropriate rate and facilitates proper muscle contraction.

The more developed an athlete is in this arena the harder they can go, and the more times the effort can be reproduced when a maximum effort of five minutes or less is needed.

Most mountain bike events begin as a mass start race where it’s a free for all once the gun goes off. Mastering this component of the race isn’t just a good strategy for securing a top position once the race goes to singletrack, it also requires a lot of effort from a dead stop. This, like all skills, can be developed with focused workouts.

This workout is a bit of a “mixed bag” session that not only focuses on a rider’s ability to produce maximum effort from the start, but also their ability to settle into sustained, sub-threshold zones after those efforts.

Typically after the start, and the big sprint(s), the work isn’t over. The rider has to work to maintain position, thus the need to train the body to handle this type of effort. After the 45-second sprints at the start of the workout, and with very little recovery, the intensity drops to 85 to 90 percent of FTP for 10 minutes.

It then moves to progressive intervals that transition from three minutes at 95 percent of FTP to one minute at 120 percent of FTP.

Training the body to cope with the sudden onset of blood lactate, as well as the ability to regain composure quickly after the big start, is as much about physical adaptation as it is mental. This session covers all of the bases to help off road athletes prepare for a traditional mass start race.

The focus that indoor training can provide for athletes with mountain bike centric seasons can be invaluable as those athletes look to prepare their bodies specifically for the rigors of the sport.

Regardless of whether the discipline is XC, marathon, or ultra-endurance, these types of workouts will help to facilitate the areas of adaptation most valuable to mountain bike racers. Make the most of any available training time by honing in on key areas, and preparing the body specifically for what it will undoubtedly encounter on race day.

If you’re training for a MTB or cycling event and want some more guidance, check out one of my TrainingPeaks training plans here.

About Taylor Thomas
Taylor Thomas is the owner and founder of Thomas Endurance Coaching. He has more than a decade of experience in the bicycle industry as an athlete, coach, race promoter, and team organizer. As a USAC and TrainingPeaks Level 2 Certified coach he's helped athletes at every level prepare for and reach their goals in road, mountain, and cyclocross. Browse his pre-built training plans on TrainingPeaks, or for more information on personal coaching and custom training plans visit www.thomasendurancecoaching.com. Follow him at @endurance_coach.
Visit Taylor Thomas's Coach Profile
#CYCLING#MOUNTAIN-BIKE