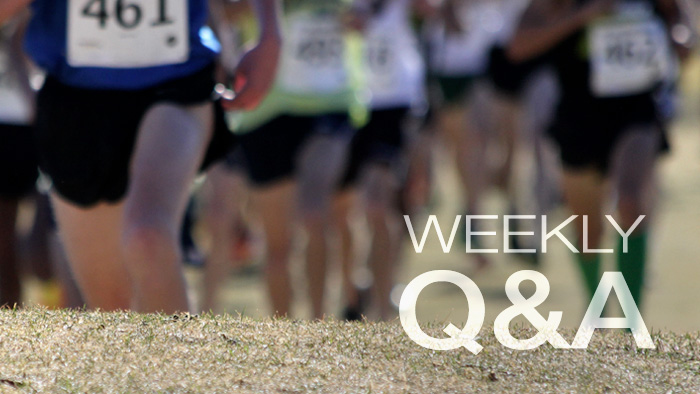 How to Train for the Challenging Course of the Boston Marathon

The Boston Marathon is coming up and training specifically for that course is of vital importance. Hal gives his advice to a first time Boston Marathon runner, but anyone running Boston can benefit from his knowledge.

I’m very excited to be running my first Boston Marathon as a qualifier in April. I know that you are an expert on the course, having run that race many times, so I wonder what challenges the race provides for someone running Boston the first time?

The biggest challenge is the excitement. Flying into what Oliver Wendell Holmes identified as, “The Hub of the Solar System,” your excitement level will rise even before your plane touches the runway. Even those living in Boston and its environment are not immune to this stress-inducing disease. You will be surrounded, like in no other city, by fellow runners, many of them wearing the classic blue-and-yellow Boston Marathon jackets. About this, all I can say is, “Gulp!” Try to arrive in town early enough not only so you can enjoy the expo, do some tourist stuff, then calm down at least by your last carbo-load Sunday evening.

Boston’s bumpy point-to-point course also presents its own set of challenges. First is the weather. Don’t listen to predictions more than a few hours out. Boston’s weather can change drastically and without warning. In fact, it can change in the middle of the race. When you crest Heartbreak Hill, you suddenly may be hit in the face by cold winds off the ocean. What had been a warm tailwind suddenly becomes a skin-chilling headwind, not fun in the last half dozen miles.

Because of those winds and being a point-to-point course, Boston can either be lightning fast or very slow depending on which way the wind is blowing. That, plus a hilly profile can confound all pace predictions, although the Pacing Project from TrainingPeaks has a pace calculator that recognizes the profile of many marathons, including Boston.

Next, let’s consider the course profile. The starting line of the Boston Marathon is at 490 feet with a particularly steep descent in the first mile that ruins be best laid pacing plans of many runners. By the sixth mile in Framingham, you will have dropped 190 feet after which the course levels off somewhat, eventually descending to a low point of 60 feet at Newton Lower Falls, 16 miles into the race.

Then the fun begins. There are the four Newton Hills, climaxing with the infamous Heartbreak Hill. This section takes runners up and down cresting at 230 feet by 21 miles. It is not so much that the Newton Hills are high as much as it is that they are relentless, not allowing runners much time to relax.

One would think the last five miles would come as a relief, given a sliding descent to 10 feet above sea level as you turn off Hereford Street onto Boylston Street. However, this is where the leg damage occurs, particularly if you failed to train for downhill running.

Boston is not an easy course to run the first time. It often takes several visits to the Boston to master the course and take advantage of any tailwind that fills your sails. Boston owes its fame to being the oldest marathon, run continuously since 1897. But another reason for its fame is the uniqueness of its course that challenges runners more than do most marathons throughout the world.