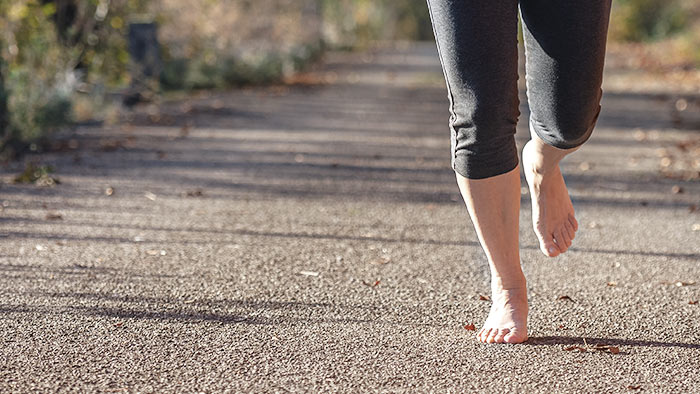 How to Safely Transition to Barefoot Running

Barefoot running, when done properly, can have a positive impact on one’s running. These guidelines from Stratton Lawrence will help you get started and remain injury free as you start on your path to running barefoot.

Before I get into the main points of this article, I want to make one thing very clear. Whether you’re a beginner or seasoned runner, if tomorrow you decide to go run your typical route without shoes on, you’re probably going to get hurt. Even if you’re a professional athlete on a strict training regimen, you might want to think twice. Maybe it won’t be the first time (if you avoid stepping on broken glass or twisting an ankle), but after a while, your knees, feet, hips or legs will start to hurt.

That’s if you just take off your shoes and hit the street without the right preparation. Barefoot running isn’t just the absence of shoes. It actually refers to an entirely different style of running, often referred to as “toe strike,” (although it’s actually more “ball-of-your-foot strike”). The catch is, it’s very difficult to properly adhere to this technique with traditional, arched bridge running shoes on. But it’s how we run as barefoot children, and with practice in adulthood, it can feel completely natural again.

My own transition to barefoot running occurred in 2012, four months before my first 200-mile team relay race. I’d been a casual runner up to that point, only occasionally running more than a few miles in a stretch. As I trained, I began experiencing knee pain that worried me about my ability to become a distance runner and maintain that later in life. A friend recommended I try barefoot running and pointed me toward Christopher McDougall’s book, Born to Run. I downloaded the audiobook and listened to it on my runs for the next several weeks- with my shoes on.

Eventually, I was convinced to give it a try. Here’s what I learned, and some advice for starting out with barefoot running yourself.

Do Your Research First to Build Knowledge and Inspiration

There’s a lot that’s been written on barefoot running. It can be a controversial topic, in part because shoe companies will find themselves in dire straits if everyone stops wearing their product, but mostly because if you do it incorrectly, you can hurt yourself. The truth is, you can seriously hurt yourself wearing shoes, as well. Technique is important, however you choose to run.

If you’re going to run barefoot, read Born to Run for the inspiration, as well as Runner’s World’s history of all the marathon and Olympic athletes that have shocked the world over the years by competing without shoes. It’s also useful to listen to running podcasts discussing and debating the technique while you run (with shoes on, at first).

Learn the “100 Up” and Study the Proper Form

At the foundation of modern day barefoot running is an exercise called the 100 Up, created by a 16-year-old British runner and chemist apprentice in 1874 as a way to stay in shape while working long days inside. Put simply, you stand in place and bring one knee up to your hip (but no higher) with the back straight and leaned just slightly forward. When your leg goes back down, touch the ground lightly with the ball of your foot and repeat. There’s a whole website devoted to the history and practice of the 100 Up.

Once you’ve perfected the 100 Up, graduate the technique to your stride in motion while you run. As McDougall says in New York Times video, “The ‘one best way’ isn’t about footwear. It’s about form. Learn to run gently, and you can wear anything. Fail to do so, and no shoe, or lack of shoe, will make a difference.”

The recent renaissance of barefoot running brought with it lots of new shoe options, most prominently Vibram’s FiveFingers and Merrell’s Trail Glove. But when you’re first learning the technique, it’s easier to adapt and properly learn the technique if you’re actually barefoot.

This may require a drive to a grassy field, a beach, or an earthen trail for city dwellers, but it’s worth it for your first few barefoot runs to be truly barefoot. After four years of “barefoot” running, I now wear my Trail Gloves about 80 percent of the time, but still try to go truly bare on the beach at least once a week to ensure I’m not reverting back.

Get Ready for Calf Soreness (but Persevere)

You may run six miles a day, but the first time you run two miles with proper barefoot technique, you won’t be able to walk the next day. You’ll feel like you climbed 10,000 stairs, your calves will be so sore. Wait a couple days and either try barefoot again, or go for a run in your regular shoes. Don’t wait too long before you try it again though.

In my case, it took about three weeks and 10 barefoot runs before my calf muscles had adapted and grown enough that I didn’t feel an overwhelming muscle soreness the following day. Remember, you’re literally springing off the ground on the ball of your foot. This is a much more natural and gentle motion, but it puts your calves to work!

Track Your Progress, but Expect a (Temporary) Decrease in Your Pace

When you change your running technique to springing up from your toes rather than aggressively propelling yourself forward off of your heels, you’re going to lose some speed at first. If you run seven-minute miles, expect to run eight or even nine-minute miles at first when learning barefoot technique.

Track your mileage and your pace, but remember that you’re working different muscles (your calves will remind you) and will require some time to get back to the same speed as your traditional style. Eventually, you’ll likely surpass it!

By comparing your existing pace and your barefoot pace, you know the difference to make up, but don’t rush it. Give yourself at least a few months. If you try to maintain perfect barefoot technique and immediately focus on speed, you will likely hurt yourself or your form will suffer.

If you’re intrigued, remember to start with inspiration, do your research, exercise with 100 Ups, and prepare yourself for an uphill climb. But if you’re like me, once you’ve successfully moved to barefoot running, you’ll wonder how you ever ran with traditional shoes on and it’ll be difficult to go back.