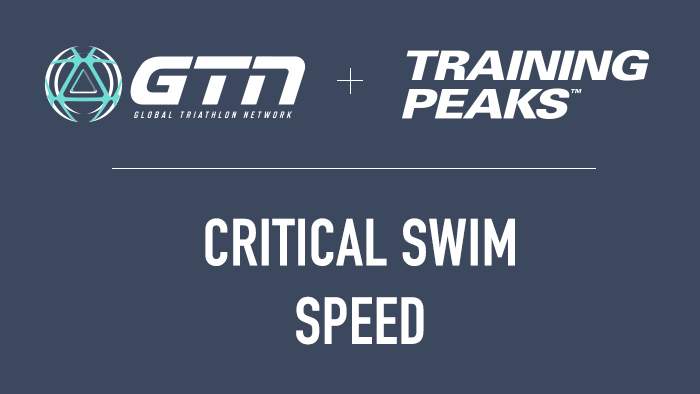 GTN Presents: What is Your Critical Swim Speed? (And How to Increase It)

In this week’s episode of Global Triathlon Network’s “Triathlon Training Explained,” they define what critical swim speed or (lactate threshold swim pace) is, why it matters and how to tailor your workouts so you can increase your threshold and improve your times.

As part of the partnership between the Global Triathlon Network (GTN) and TrainingPeaks, we’ll be bringing you twice-monthly episodes of the new “Triathlon Training Explained” show, where hosts and former pro triathletes Mark Threlfall and Heather Fell answer your triathlon training questions with the help of TrainingPeaks software, coaches and industry experts from around the world.

For many triathletes, mastering the swim leg of the triathlon is a constant battle. Whether they just aren’t strong swimmers, or tend to go out to hot and then struggle to hold pace, it’s a common multisport theme that losing time in the swim is a legitimate concern.

While many triathletes think the answer to fixing this is just getting in the pool and swimming more often, that’s only half the battle. Understanding your Critical Swim Speed (CSS) — otherwise known as your swim threshold pace — is an important metric from which to plan your swim workouts for improving race day speed.

In the latest episode of “Triathlon Training Explained,” host Mark Threlfall goes into the science behind CSS or swim threshold, which he defines as “The point at which your start to accumulate lactate in your bloodstream at a quicker rate than it can be removed.”

Threlfall explains how to complete your own CSS test and explains how you can then use this number in your TrainingPeaks account to better calculate your swim zones for more accurate Swim TSS® scores.

Finally, Threlfall gives his own favorite lactate threshold swim sets and outlines some common mistakes to avoid and how to make sure your threshold swim sessions are a part of a well-rounded swim program.

Triathletes in the know use TrainingPeaks to help plan, track and analyze their training. Dial-in your triathlon training with a free 14-day Premium Trial today!

About Susan Legacki
Susan Grant Legacki is the Content Director at TrainingPeaks. The founding editor of LAVA Magazine and a former editor at Triathlete Magazine and Inside Triathlon, Susan is an IRONMAN finisher, Boston Marathon qualifier, USAT Level 1 Triathlon Coach and certified Pilates instructor. When she's not editing or writing copy about endurance sports, you can usually find her training for them around Boulder, Colo.
#TRIATHLON