Triathletes widely recognize the importance of good form in the pursuit of increased efficiency. Yet that same dedication to technique and form often takes a backseat in the discipline of running.

Triathletes widely recognize the importance of good form in the pursuit of increased efficiency and faster times in the water. Yet that same dedication to technique and form often takes a backseat in the discipline of running. Although running is not a technique-dependent sport to the same extent as swimming, dedicated attention to form in your run training holds substantial benefits, including greater resistance to injury and better running economy.

Runners who regularly incorporate drills into their training are better able to recruit muscles needed for the task, leaving them less injury-prone. And when the going gets tough, they are more efficient than the runner who doesn’t work on proper form. Given that an improvement to running economy can be just as good as an improvement in VO2max when it comes to that final number on the stopwatch, it only makes sense to squeeze as much “free speed” out of one’s performance as possible.

These drills for running form are best performed on a soft surface, such as a rubberized track, the infield of a track, a flat dirt trail or grassy field. Perform the drills after you have completed your initial warm up, or at the middle or end of your run. Do each drill for 10 to 20 meters, and go through the sequence at least once. If time permits, you can repeat the sequence 2 to 3 times. Aim to incorporate at least one to two drill sessions into your running program each week.

Running takes place almost exclusively in the sagittal plane (flexion/extension) to propel the runner forward, yet muscles that operate in the frontal plane (abduction/adduction) play an important role as stabilizers. These first two drills build strength and coordination among these stabilizing muscles. For the side-to-side skip, skip side to side by bringing your feet together and then shoulder width apart. Let your arms cross over each other in front of the body as you skip.

Like the side-to-side skips, the carioca or grapevine drill further works the stabilizing muscles that play a secondary but nevertheless vital role in running. As you move sideways, cross one leg over the other in front and then behind. Hold your arms out to the side to begin; as you start to get the hang of the drill, use your arms as you would while running.

These next drills recruit the primary movers—namely, the glutes and hamstrings—that operate during the active propulsion phase of the run. For the A-skip, skip with high knees. As you bring your leg down, finish with a slight pawing motion as you pull backwards. This pawing motion is often neglected, but is a key element of a powerful stride. Focus on initiating that pull from the glutes as the hamstrings then join in the motion. This will ingrain the backward pulling motion important for running propulsion into your muscle memory. Use the same arm motion during this drill as you use while running.

The B-skip is nearly identical to the A skip, but first extends the leg forward. This extension of the leg dynamically stretches the hamstring and then allows you to really emphasize the backward pawing motion as your foot lands on the ground and pulls through. Get into the rhythm of the A and B skips by listening to the pattern of sound your feet make as they contact and scuff the ground, pawing backwards. Use the same arm motion during this drill as you use while running.

The butt kick drill further conditions and coordinates the glutes and hamstrings for a strong running stride. The butt kick drill should almost feel like a variation of running with high knees (rather than simply kicking backwards). Pull your heels up directly beneath you, keeping the knee, heel and toe up throughout the drill. Use the same arm motion during this drill as you use while running.

The high knee drill works the loading phase of the run. The key to performing the drill correctly is to focus on driving the foot down and letting it spring back up off the ground (rather than lifting the knees). Use the same arm motion during this drill as you use while running.

The straight leg run reinforces the important pawing motion practiced in the A-skip and B-skip. Start slowly and gradually increase your speed. Avoid the temptation to lean backwards—in other words, keep your upper body perpendicular to the ground as you run with straight legs. As your foot contacts the ground, finish with that same backwards pawing motion as you practiced in the other drills—squeeze the glutes and hamstrings as you pull back.

The ankling drill helps facilitate the proper loading and spring during running. Starting at the toe, push the foot down so that the heel barely contacts the ground. The movement can be difficult to learn at first, so begin in slow motion; then gradually pick up the pace and keep the cadence high.

The bottom line is that good form equals free speed. Time-crunched athletes can easily work these drills into a few easy running days each week. As you do, focus on consistent practice and proper application to gain the most benefit for your running. The dividends will come in the form of better neuromuscular coordination and stronger muscles dedicated to the activity of running.

Did you find this article helpful and want some more training and advice from Adam? Check out Adam’s triathlon, swim, cycling, and running training plans for sale on TrainingPeaks.com, or visit his coaching website at www.alpfitness.com. 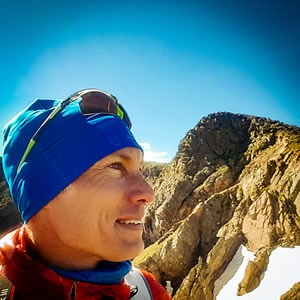 About Adam Hodges
Adam Hodges, Ph.D., is a USA Triathlon certified coach and American College of Sports Medicine certified personal trainer. In addition to coaching multisport athletes, he has coached high school cross country and track runners in California and masters swimmers in Colorado. As a USAT All-American triathlete, he has competed in the ITU World Triathlon Championships, the ITU World Duathlon Championships, and the Ironman World Championships in Hawaii. As a masters runner, he has won a series title in the XTERRA SoCal Trail Series. Learn more about his books and training resources at www.alpfitness.com.
Visit Adam Hodges's Coach Profile
#10K#5K#HALF-MARATHON#RUNNING