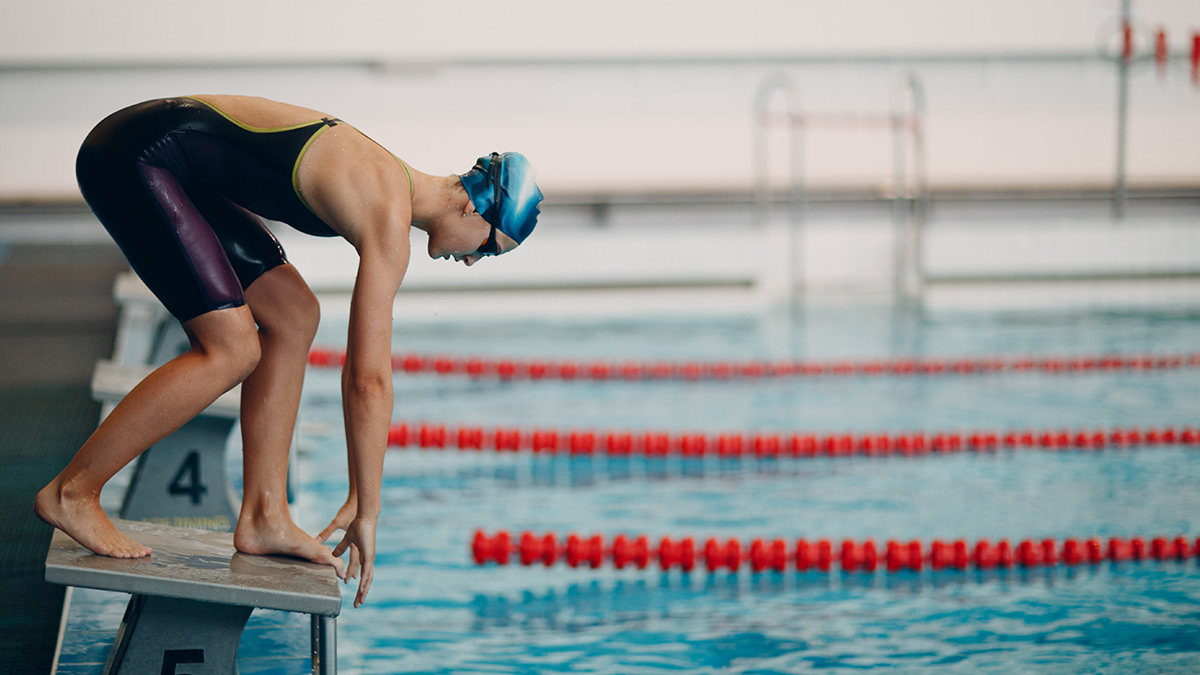 Do You Know What’s Lurking In Your Pool?

It’s indoor pool season, and the chemicals you’re swimming in might be harming your health. Here’s why and what to look for.

In general, athletes are a healthy bunch. Defining characteristics might be low body fat, nutrient-dense diets and attention to details like sleep and stress reduction. Maybe that’s why it seems so strange that most swimmers don’t talk about the potential for negative health consequences from swimming in indoor pools.

A client of mine named Justin swims competitively and has for over thirty years. During his peak competition phase, he swam nine to ten times a week for two hours a session, predominantly in indoor pools. Even now he swims five days a week, minimum. “I constantly smell like chlorine. There is no amount or kind of soap that can get the smell off your body.” He admits he’s almost immune to it now, but if he happens to get caught in the rain, the smell intensifies. It’s common for swimmers to report dry hair, itchy skin and red eyes; some even lose body hair, usually from legs and arms. As such, allergy pills and inhalers are not uncommon prescriptions for frequent swimmers.

If these symptoms seem like nothing more than an inconvenient side-effect of working out in treated water, consider what those chemicals might be doing to your lungs. Justin reports, “Most of the time, I can tell immediately when walking onto the deck if I’ll have an issue—it’s worst when the pool air and water are warm, stagnant and humid.” He describes the general progression, “depending on the air quality and chlorine levels, light coughing will start after about 30-45 minutes, at which point I try to moderate my breathing so that I won’t need as much oxygen. I can tell there is a problem when I’m hearing coughing from teammates around me.”

Recently during a long swim, Justin had to be transported to an emergency room and put on oxygen because of the inflammatory reaction in his lungs. Even after a regular workout he says he might have a cough for the rest of the day; he feels like he can’t catch his breath and is fatigued. He’s not the only one—a fellow swimmer once required oxygen administration on deck due to his inability to breathe fully. “The rest of us kept swimming.”

What the Science Says

Swimming remains a popular sport. According to PHIT America, swimming for fitness ranked number two in the growth of top activities in the United States in 2013 with 3.1 million new participants. USA Swimming, the national governing body for swim-related athletes, noted in 2018 that 347,000 people were year-round members of a swim club, and that does not include the many others who swim outside the club scene. Data shows swimming can be great for autism, arthritis, asthma and also is an excellent way to maintain muscular and cardiovascular health.

Yet there are literally hundreds of studies on the negative effects of swimming in disinfected water. Some studies have described the prevalence of asthma in school children who swim. Others have demonstrated a connection between adverse respiratory effects with air quality in pool workers. There are even studies of elite swimmers showing a higher rate of asthma than the general population.

Still, as one lifelong competitive swimmer said when asked about health concerns, “I don’t care. Swimming is my main mood boost. Can’t give it up!”

In the end, what might matter most to swimmers is how to mitigate possible exposure to dangerous chemicals. Luckily, there is some scientific agreement on this topic. Here’s what to do if you’re experiencing (or are worried about experiencing) negative side-effects from swimming indoors.

Yes, you do need to shower before swimming.

Chlorine and chloramines in a variety of forms have long been key players in water treatment in the United States and the world. Hypochlorous acid, the active ingredient, is a powerhouse in decimating microbes, and small amounts added to water will kill dangerous bacteria, parasites, and viruses that can cause illness and infection in humans. Chlorine is a necessary element for our bodies, and nontoxic.

Chlorination is the most commonly used disinfection treatment in swimming pools and would be entirely fine, if the hypochlorous acid did not react with other substances in the pool. The resulting chemicals are called disinfection byproducts (DBPs), and they occur when the chlorine mixes with organic and inorganic matter introduced by swimmers (think sweat, urine, and cosmetics). DBPs can be ingested (drinking water in the pool), inhaled, or absorbed through the skin.

This is why it’s also very important to shower before swimming. In American pools, there is often a sign telling users to shower, but an unspoken climate of resistance often exists, likely due to a misunderstanding of the reason why. Removing as many contaminants as possible helps reduce the amount of DBPs in the water, and will also help you pick up fewer chloramines, improving the quality of your skin and hair post-swim.

If you can smell the pool, don’t swim in it.

“The ‘pool smell’ is NOT evidence of chlorine doing its job,” says Andrew, an Australian triathlete who now works as a pool director in the United States. He says the familiar scent is actually due to chloramines, chemicals that build up in pool water that isn’t treated properly.

One of the chloramines, called trichloramine, is greatly responsible for the smell associated with swimming pools. A known carcinogen, it is studied in relation to human health in treated tap water as well as swimming pools. Trichloramine is the most volatile chloramine and thus most likely to be found at the highest concentration in indoor swimming pool air, leading to exposure by inhalation.

Another by-product is a group of chemicals called trihalomethanes (THMs). These also cause respiratory irritation through inhalation. Scientists have found these byproducts are related to pool size, swimmer load, chemical balance and air exchange.

Andrew says that keeping the balance in a pool depends a lot on the investment of updated systems and the reliability of staff monitoring the pool. Levels of free available chlorine (FAC), which Andrew says need to stay between .2-.4 parts per million, should be carefully tracked. FAC’s kill bacteria, but when combined with pool contaminants, they aren’t available for fighting germs, and instead become another chemical with adverse side effects.

He adds that an air exchange system is essential in maintaining the health of swimmers in the pool. A giant fan at one end should move air from the top of the water and, coupled with an exchanger, will bring in fresh air. The old air is routed outside the building. Unfortunately, this system is not infallible and sometimes can’t keep up with demand. One study found that air quality was at its worst in the colder months, when many swimmers are indoors, as air exchange was less efficient with a wider discrepancy in temperature between outdoors and the pool facility.

The number one recommendation: If you can smell the pool, don’t swim in it. A chlorine scented pool is one without enough free available chlorine to fight bacteria, but with enough combined available chlorine to cause negative health effects. In addition to using your nose, note that the pool water is clear and there is no residue or scum around the edges and along the walls.

If you have trouble breathing, stop or slow down.

Enough data shows that each person’s susceptibility to negative effects varies based on genetic or physiological components. So the best plan of action when swimming indoors is to simply trust how you feel. Just because your lane mate feels fine,  it doesn’t mean that you should too.

The risks of swimming in chlorinated water are real, and the variation from pool to pool can be exacerbated by mismanagement or outdated systems. Pay attention to the warning signs at your pool, and don’t be afraid to switch if you’re experiencing negative side-effects. Swimming indoors is an effective and convenient way to stay fit through the winter months, but you shouldn’t have to sacrifice your health to do it!

Carrie McCusker specializes in athlete performance at all levels. While she has spent the majority of her life as a competitive elite athlete she is also an experienced educator and coach with an MS in education and extensive training in the implementation of science based coaching with a focus on meeting the needs of each individual athlete. She can be reached at carrie@pbmcoaching.com or see details at www.pbmcoaching.com or https://www.trainingpeaks.com/coach/carriemccusker