Will Big Lungs Make You A Better Cyclist?

Does the size of your lungs have anything to do with your performance? Find out. 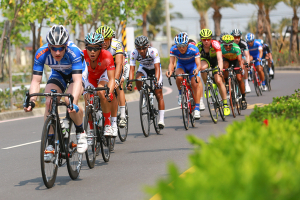 You know that guy. The guy that comes out to the weeknight group ride and just rides people off of his wheel. Your legs are on fire, you’re seeing through tunnel vision, as you’re doing everything you can to cling for dear life to the wheel in front of you; all while this guy is pulling on the front like he’s tooling around town with his grandma. Guys like this usually have some sort of regional legendary status. People talk about them over beers and coffee pre and post rides- even if they aren’t there! Riders will say things like, “Joe, man, that guy is a hammer. He just throws down the power. He’s gotta have a big pair of lungs.” Well, yes, Joe could possibly have a big pair of lungs, but the size of his lungs really has nothing to do with his performance ability as a cyclist.

Wait, what? Yes, that’s what I said, the size of your lungs really has nothing to do with your ability to perform an endurance exercise. And let me assure you, there is hardly anyone that is more depressed about this than me. Back in the day, during an undergraduate physiology lab, I blew into a spirometer and found out I had some pretty massive lungs for my size. For me, this immediately translated into an anatomical advantage for the sport of cycling, which I competed in. I managed to cling to this delusion all the way to grad school, where my advisor managed to deflate my proudly maintained anatomy and physiology misconception (pun intended) within my first semester.

So what gives? We know that oxygen is very important for maintaining an endurance exercise at a high output, and it would seem to make sense that the more oxygen we can get into our bodies the better we would be able to perform. This is partly true. Oxygen is good and for the most part, more is better, but simply bringing in a large quantity of oxygen into the lungs isn’t enough to improve performance. The reason for this has to do with the fact that the oxygen transport system in our bodies runs in series. This means every step of oxygen transportation has to happen in a specific succession. There is no bypassing of steps. Because of this, the amount of oxygen that can be delivered is determined by the rate of the weakest step in the process. This also means that one overbuilt step in the process won’t necessarily help unless the other parts can keep up.

Your lungs are actually very overbuilt for the job they have to do. Under most exercise conditions they bring in far more oxygen than can be removed from them. In fact, at maximal exercise, an athlete can bring in over 150 L of air per minute to where gas transfer can take place in the lungs. About 31.5 L of this air will be usable oxygen, but even the most elite endurance athlete will only remove 6 L of this and end up returning 25 L to the atmosphere! A big reason for this has to do with what allows the oxygen transportation system of the body to work. When oxygen moves from the lungs into the blood, it does this through a phenomenon called passive diffusion. In order for this to happen there has to be a pressure difference, with a high pressure in the lungs, and a lower pressure in the blood. Passive diffusion works much like water flowing from a reservoir through a hole in a dam. In this analogy the reservoir basin would be the lungs, the water would represent air/oxygen, the dam is the inner tissue of the lungs, and the hole is where the actual gas exchange takes place between the lungs and blood.

It could be thought if this is how lungs work then increasing the reservoir, and therefore the pressure difference, could increase the amount of oxygen that could be delivered. Unfortunately, this is not really the case. To explain this we need to modify our dam analogy (ha, I said “dam analogy”). Imagine now the dam has a conveyor belt of buckets that arrive at the hole. In this modified version of the analogy the buckets represent red blood cells, the conveyor represents blood plasma, and the motor that moves the conveyor represents the heart. Imagine that the water is only allowed to flow from the hole if there is something there to catch it, be it a bucket, or the surface of the conveyor. Adding more pressure in this scenario doesn’t make that much of a difference, because your rate of transfer is limited by how many buckets (and how much conveyor belt) you can get to the hole.

At this point someone could say, “What about increased surface area? Wouldn’t bigger lungs have more surface area and allow for greater oxygen transfer to the blood?” Well, it is true that bigger lungs have a larger surface area, but similar to the issue of increasing pressure in the lungs, increasing surface area on an already overbuilt structure isn’t going to make a difference in a series system. Using our dam/bucket analogy we can see this. Imagine instead of one conveyor with buckets going to one hole in the dam we have two holes, each with their own conveyor and buckets. If both holes are the same size, we have effectively doubled our “surface area” for transfer from the original scenario, but this does not double our rate of transfer. In order to double our transfer we would also have to double the total amount of conveyor/buckets reaching the holes. If our conveyor motor can only power something like 60 meters of conveyor belt per minute cumulative across whatever belts are involved, adding more holes in our dam will not increase flow.

In anatomy and physiology terms, healthy lungs already have a huge amount of surface area. This is due to their construction. The lungs transfer oxygen through tiny sacks called alveoli. There are millions of these in the lungs and their total surface area add up to around 860 ft2 (depending on the individual). This is sufficient enough to allow for a high amount of oxygen utilization in most cases, and if it’s not, something funky is probably going on.

This dam/bucket analogy should help to show that if you could increase your lung size, it wouldn’t help in getting more oxygen to working muscles, and therefore wouldn’t help increase your endurance performance. It can be said then, having big lungs won’t help your performance under normal exercise conditions, and having small lungs won’t hurt your performance. In fact, many elite level endurance athletes have small lungs due to their small body sizes.

The dam/bucket analogy could also help to show the limiting factors for the oxygen transport system during exercise if we included something that represented the working muscles, but discussing this gets complicated and it is beyond the scope of this article. The important take home message is, under normal conditions, in a healthy exercising adult, the lungs are not a limiting factor for oxygen transport.

There are always exceptions to rules, and concepts in pulmonary physiology are no different. There are three main caveats we have to make note of when we discuss ventilation during exercise. These are: exercise induced bronchoconstriction (or exercise induced asthma), altitude, and exercise-induced arterial hypoxemia. This is not to say that having big lungs is better in these situations, but it is to say these are situations where ventilation is potentially a limiting factor in oxygen transfer and/or performance. It’s worth looking into these conditions if they affect you or will potentially affect you.

It’s safe to say we should be skeptical of just about any product or practice that promises performance increases by allowing for more lung capacity. I’m sure there is a decent-sized list of these things, and many of them I’d love to take the time to critically analyze, but for the purposes of conciseness I’ve decided to touch on just one for this article.

Understanding what we know about lung volume, and its relation to endurance performance, we might want to have some questions ready when we hear bike fitters talk about putting riders in positions that “open up the lungs”. If their claim is that this increase in lung volume also increases performance, we know this is not true and we can reject it. If the claim is that the fit reduces breathing obstruction or allows for easier breathing, and therefore increases performance, things get more complicated. Discussing this would be a post in itself, so I’ll restrain myself from digressing, but I will say this, it does deserve some critical analysis.

About Jason Boynton
Jason Boynton M.S. is an exercise physiologist, medical researcher, USA Cycling level 1 certified coach, and elite level cyclist. His educational background includes a Masters in Exercise Physiology from Eastern Michigan University and an honors degree in Cell Biology & Physiology from UW- Whitewater. During his masters degree he studied under Associate Professor and USA Cycling Faculty member Stephen McGregor. Applied science, critical thinking, and skepticism are the bases of his coaching methodology. As a researcher, he started working with trained endurance athletes in a lab setting in 2005. This has given him extensive experience and insight working with athletes above and beyond coaching. Jason recently accepted an international scholarship to an Exercise Physiology/Sports Science PhD program at Edith Cowan University in Perth, Australia. Find out more at www.boyntoncoaching.com.
#CYCLING